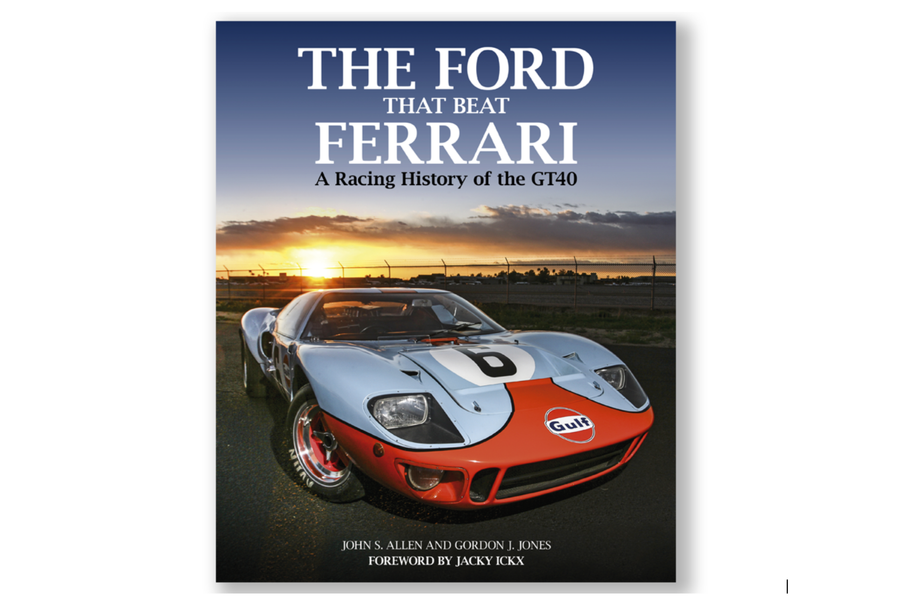 The Ford GT40 was one of the iconic racers of the 1960s, a challenger to sportscar legend Ferrari and a car now in the limelight again with the release of the ‘Le Mans 66’ movie. This reissue of ’The Ford That Beat Ferrari’ is a comprehensive look at the genesis of the GT40 from the reliability woes of the original car, the MKII version that finally dethroned Ferrari at Le Mans, and then the success of the small-engined GT40 at the end of the decade as JWA took two further Le Mans wins.

The headline story of the car is pretty well known, but one of the delights of the book is that it goes into depth on the many privateer teams who ran the GT40.  Many of these were new to this reviewer and it shows the importance of the GT40 in motorsport at that time away from the high-profile endurance events.

This is in fact the third edition of the book, it was first published in 1985, before then being updated and redesigned twenty years later. This version brings the GT40 story up to date and the writing team of marque of enthusiasts Allen and Jones are obviously very knowledgeable on their specialist subject.

Often in books such as this the text is  a linear rendition of the story, but here the story is told pictorially as much as textually, lavishly illustrated with many pictures I had not seen before, the story told by the extensive captions. From the early tests of differing nose styles and vents, right through to a postscript about the Ford GTs that that have raced at Le Mans in recent seasons, once again challenging Ferrari, the photography is excellent and varied.

The imagery is from a  wide range of sources including Ford themselves, the extensive LAT archive and even Ferret Photography for some wonderful images of GT40s in British club racing. Naturally there is a host of race pictures, but also some superb paddock imagery, workshop preparation shots, and even some reminders of when things don’t go so well such as Charlie Lucas having put his GT40 into the barriers at Silverstone's Woodcote corner (oddly, it seems to have been the barrier that came off worse), and the same car covered in foam after a pit lane fire just a month later.

The book also contains a level of data to make those of us who love the minutiae of a subject such as this happy. There is a list of chassis numbers and the brief summary of the career of each car, including UK registrations for those converted to road use.

That is followed by a listing of drivers who raced GT40s between 1964 and 1971, including the chassis numbers of the cars they raced, a reminder of how ubiquitous the GT40 was for so many years. There is also a look at the proliferation of GT40s built by a variety of concerns since the heyday of the car in the 1960s, as well as a look at cars competing in historic motorsport in recent years, including an acknowledgement of the number of ‘new build’ cars that are now racing at events such at the Spa Six Hours.

It should be fairly obvious by now that we thoroughly enjoyed this book, and as a record and summary of the career and impact of the Ford GT40 it would be hard to surpass the work that John S. Allen and Gordon J. Jones have put into their tome. As a reminder of a classic car from a classic time in motorsport, it is a fitting addition to any bookshelf.