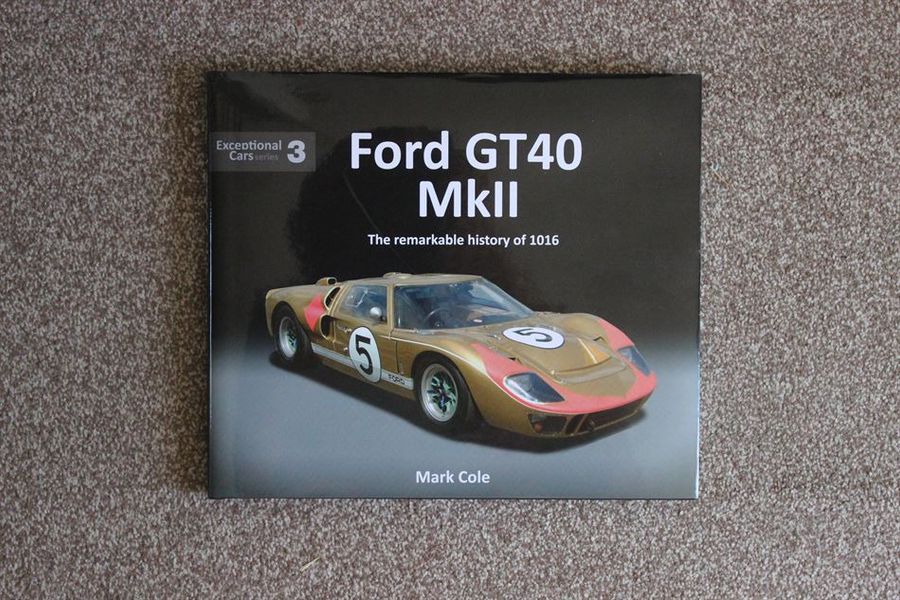 Writing a book about a car that only has four races may seem a tall order, but it was a challenge experienced journalist Mark Coles was willing to take on with Porter Press’s Ford GT40 MkII: The Remarkable History of 1016. The MkII version of the GT40 is famous for filling the first three places in the 1966 Le Mans 24-Hour race, and chassis number 1016 was the third of the cars in that formation finish, and also the development car for the MkIIs, thus having quite a tale to tell.

Cole has dug beep to bring us the story of 1016, and used the book to provide context to its build and the decision making that led to the car being built in the UK, then shipped to the US to become the MkII. The illustrations alone make the book of huge interest, from the period race shots and even official documents (including Ford’s own race reports of issues faced), right up to a gallery at the back of the book of the car is it today (though we should admit right now that we are the kind of reader who gets excited by the close up of the pedals…).

Chassis 1016 may only have had for races, but they were quite a CV to have collected. It made its debut at the 1966 Daytona 24-Hours, first time the event ran over that length, and retired just over 12-hours in with a transmission issue. From there is went to the Sebring 12-Hours a month later, but brake problems – there is a nice quote saying ‘none of us could recall how many sets of pads we changed’ – 1016 was only 12th in the hands of Ronnie Buckman and AJ Foyt, the race also marking the last time the car ran with an automatic two-speed gearbox.

Next outing was at Le Mans where it formed part of that all-Ford podium, the car now with a manual gearbox and again in the gold bodywork it had sported at Sebring. Buckman and Dick Hutcherson brought the car home after a wet-dry race, and Cole intriguingly has even managed to reproduce the letter sent by Ford to the car’s preparers Holman and Moody which confirms that the car was the team’s ‘tortoise’…under order to hold back to ensure a finish and not show its full pace.

Although it appeared at the Le Mans test day in 1967, the final race for 1016 was the Daytona 24-Hours in February that year where gearbox issues hot all the MkIIs, the car retiring when its second box expired in the race and no spares were left.

Still in its gold livery and with the pink identification marks added for Le Mans in 1966 1016 is still seen in historic racing, having emerged back on track after a time in a museum, and the book even includes pictures of it in action at the Le Mans Classic, plus a summary of its historic racing activities.

As part of the Porter Press ‘Exceptional Cars’ series, 1016 may not be a famous race winner but Mark Cole’s book shows how the car was often there when history was being made, and also paved the way for the developments to the GT40 line that gave Ford it’s time in the sun in the middle of the 1960s.