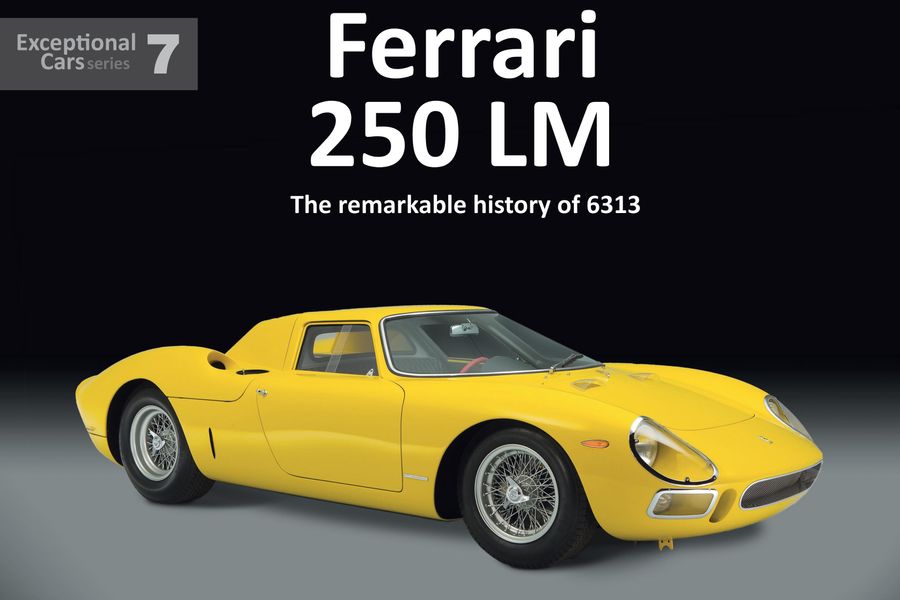 Born of controversy, the compact Ferrari 250 LM mid-engined coupe was intended to qualify as a GT car for world championship racing but was decreed by the sport’s rule-makers as ineligible. Instead, the new model was obliged to race through 1964 and 1965 as a sports-prototype against faster, purpose-built machinery. And yet, despite this apparent disadvantage, two 250 LMs dominated the Le Mans 24 Hour race in 1965. One of those cars, chassis number 6313, is the subject of the seventh title in Porter Press’ Exceptional Cars series, written by James Page..

6313 was the third 250 LM acquired by Jacques Swaters’ Ecurie Francorchamps team and one of the last of the 32 built. Painted in the bright yellow racing colours of Belgium and driven at Le Mans in ’65 by Pierre Dumay and Gustave Gosselin, this car led from the 11th to the 20th hours before having to pit with bodywork damaged by a rear tyre failure. Racing back into action after hasty repairs, 6313 finished second to the NART 250 LM of Jochen Rindt and Masten Gregory.

- How the 250 LM was intended to be the ultimate variation of Ferrari’s 250 GT theme, a development of the SWB and GTO, but the rule-makers saw it differently.

- The genesis of the 250 LM, its development, technical details, and specification. Here are all the elements upon which Ferrari’s legend has been built: beautiful Pininfarina bodywork, a sonorous Colombo V12 engine, and motor sport success.

- How 6313’s identity was confused for many years with that of its team-mate, 6023, until detective work by Ferrari specialist Keith Bluemel revealed the truth.

- 6313’s other major European long-distance races in 1965 at Monza, Spa-Francorchamps, the Nürburgring, and Reims, as well as participation in the Grande Premio de Angola.

- Driver profiles, period documents and photographs, and studio photos of the car today.

James Page is a former editor of Classic & Sports Car magazine and now a freelance motoring writer and author. He still contributes to Classic & Sports Car, as well as other titles including Autosport and Octane. James has written several books for Porter Press including Jaguar Lightweight E-type – The Autobiography of 49 FXN, published in the acclaimed Great Cars series, and the Aston Martin title DB4 G.T. Continuation: History in the making.