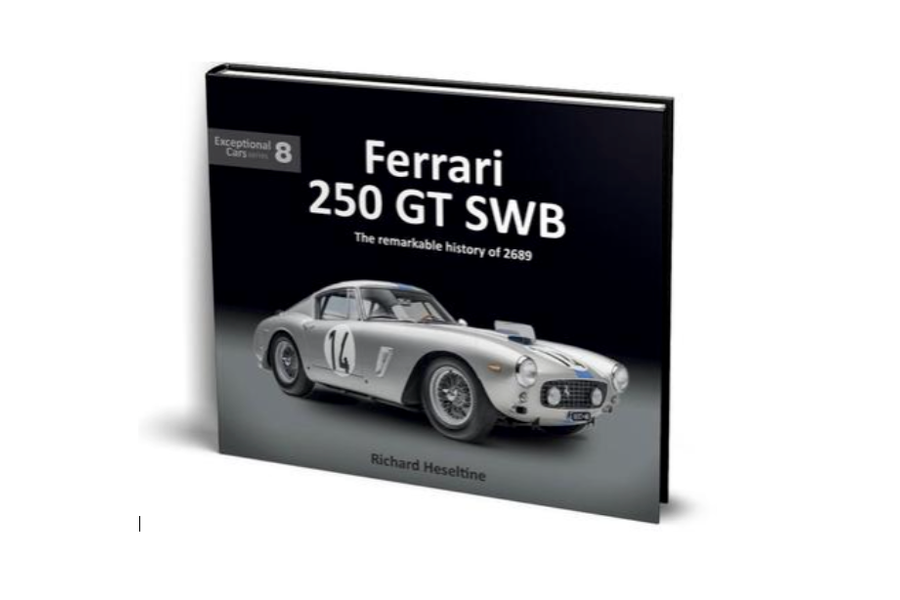 The Ferrari 250 GT SWB is among the most iconic of all Ferraris, and indeed the greatest of all sports cars, ever made. Brilliant on the road and near-invincible in period GT racing category, this model gave Ferrari the title for GT Manufacturers in 1960 and ’61 and is now one of the most coveted cars ever produced by Maranello.

The 250 GT SWB was raced by established stars of the sport and ‘gentlemen drivers’ alike during an era when the term ‘amateur’ was not yet derogatory. The car with chassis number 2689GT, the subject of the latest in Porter Press’s Exceptional Cars Series, is a fine example of this bygone age: owner-racer Pierre Noblet would invariably be back at his desk at nine o’clock on the morning after a race weekend, and his driving partner Jean Guichet made the leap from amateur to professional while continuing to hold down a day job. In the Le Mans 24 Hours race in 1961, privateers Noblet and Guichet came home first in class and third overall, beaten only by two factory-run Ferrari 250 TRI/61s.

This entertaining 128-page book, priced at just £30, tells the story of 2689’s brief but bright competition career, and the 250 GT SWB more broadly.

Highlights
The rise of 250-series, raced by stars such as Phil Hill, Mike Hawthorn, Olivier Gendebien and Alfonso de Portago.
The on-track successes of the 250 GT SWB and the development of the model’s engine and chassis, with much work done by test driver Mike Parkes.
The key roles played by designers Pininfarina and Sergio Scaglietti, and engineers Giotto Bizzarrini, Mauro Forghieri and Carlo Chiti.
The backstories of 2689GT’s principal drivers, Pierre Noblet, who ran a textile business, and Jean Guichet, who founded a company which serviced and refitted ships for the French Navy. Guichet was subsequently recruited by Ferrari’s works team and won Le Mans in 1964.
How Guichet and Noblet scored GT class victory and took third place overall at Le Mans in 1961; 2689’s other races that season at Monza and Montlhéry; and the car’s races in 1962 at Brussels, Spa, the Nürburgring and Clermont-Ferrand.
The car’s nine-year refurbishment, move to California, and new home in the collection of Bruce Meyer, founding chairman of the Petersen Automotive Museum.
Photo gallery showing the car’s overall beauty and design details under perfect studio lighting.

Author and journalist Richard Heseltine writes with a focus on classic and contemporary performance cars and motor sport history. A former staff member of Classic & Sports Car and Motor Sport magazines, he is the author of books on subjects as diverse as small-series British sports cars, Italian coachbuilding, Ferrari design history, and a biography of racing driver and team principal Graham Warner.