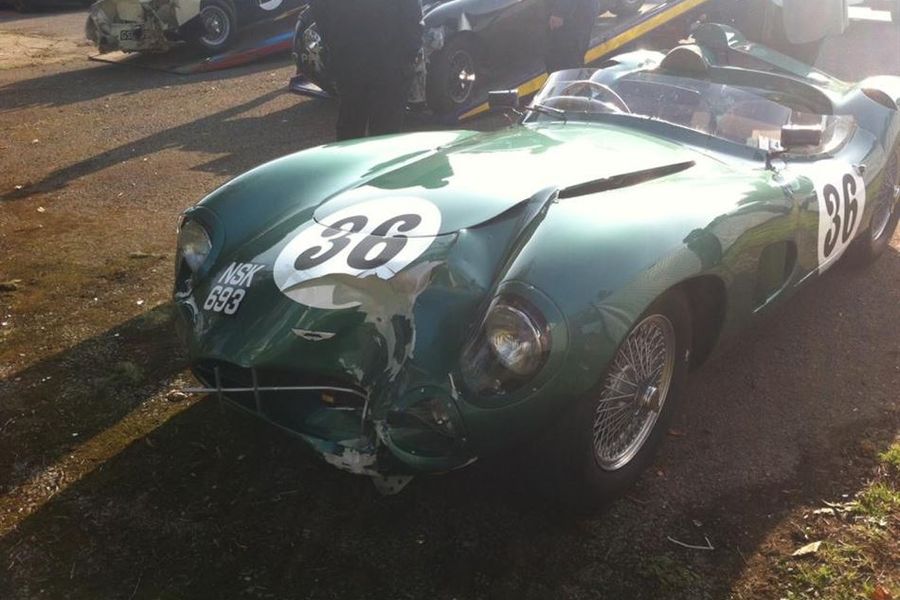 Aston Martin DBR1/4 was damaged in a race at Castle Combe on Saturday, a victim of a multi-car incident at Quarry corner in the FiSCar 50s Intermarque race receiving damage to the front and rear of the car. The lightweight bodywork probably means the damage looks worse than it may well be, but the incident has stirred up a healthy debate on our FaceBook page about such historic cars actually being raced – and by implication put at risk of such damage.

The overwhelming sentiment from our ‘followers’ is that historic race cars are exactly that – cars meant to be raced and as motorsport is inherently not without risk, such incidents will happen. They are mercifully rare though, as they can also be a reminder that the safety standards current when such cars were designed and built were of a very different era.

Fourth of the five DBR1s built, DBR1/4 was actually converted from the only DBR3 (a short lived model intended for racing) at the start of 1959 and was used by the factory at Le Mans that year, where it was taken to second – behind the victorious DBR1/2 – by Maurice Trintignant and Paul Frere. In the latter stages of the race DBR1/4 was lapping quicker than the eventual winner – the Aston Martin pit signalling to Trintignant to slow and in the end the car finished a lap down.

The Aston Martin in question is of great value – it coincidently featured in a programme on BBC2 On Sunday night and the figure of £20m was mentioned – and owner Adrian Beecroft, who was at the wheel at the time, will undoubtedly have the car repaired, so it can continue its regular race outings. The alternative, that cars of historic note – or even of a certain age – are just fit for museums or even worse, private collections, denying us the sight of cars we may have grown up enjoying on the track and that make out branch of motorsport so popular these days lapping at speed, as they were intended to do.