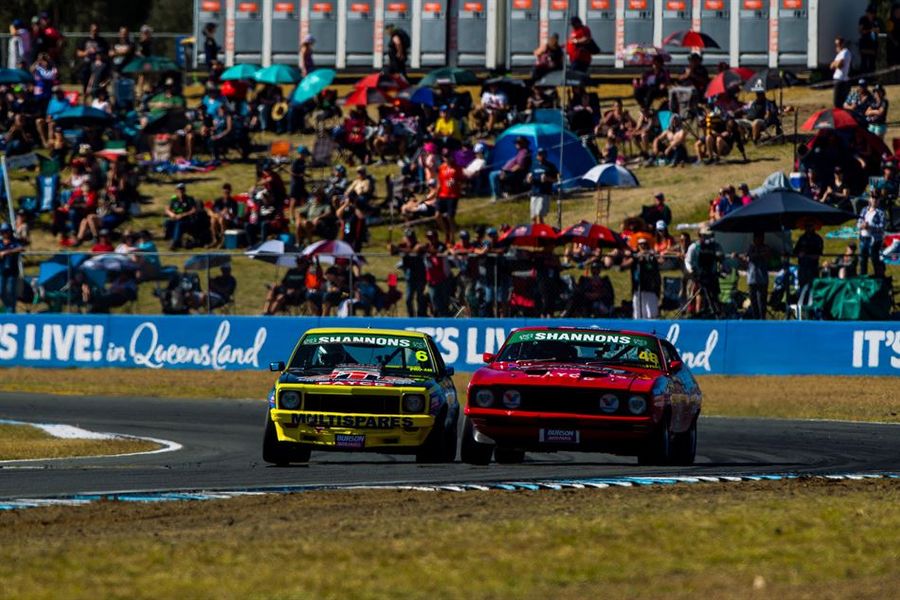 Photo: Richard Craill
Eddie Abelnica defeated Ryan Hansford in the best Touring Car Masters race of the year at Queensland Raceway today, while the championship is all tied up heading into the business-end of the season. John Bowe and Adam Bressington now stand tied at the top of the TCM overall standings, however it was the race three battle that was arguably the best moment of the weekend.
In a weekend that delivered three winners from three races, Abelnica and Hansford battled for the victory in the final race in a breathless duel that saw the pair side-by-side for much of the final two laps.  While the Falcon was quicker in the straights, the Torana was better under braking and through the corners – producing a thrilling race.
After crossing the line alongside each other on the penultimate lap, Abelnica got the best drive out of the final turn on the last lap end ended up edging out the Multispares Torana in a stunning race to the line.
It was Abelnica’s first win of the year, the sixth different winner of the 2017 season and his first win since Phillip Island last September. Hansford’s second represented his best TCM result, while Steven Johnson edged out race two winner John Bowe for third place.
The pair had started from the front row, however Abelnica’s powerful start from second place – based on the finishing order of race two earlier in the day – saw him pull in front on the opening lap, Hansford following him through.
Johnson then also jumped the slow-starting Bowe, though the Torana quickly attached itself to the rear bumper of the Mustang and never left it for the remainder of the race.
Jason Gomersall, Adam Garwood, Adam Bressington, Shannon O’Brien, Leo Tobin and Mark King completed the top-10.
Gomersall, Bressington and Garwood in particular fought a feisty battle for fifth place that lasted a majority of the race.
The mixed results at Queensland Raceway this weekend saw a variety of different driver score trophies; Leo Tobin winning the ProSport class ahead of Darren Beale and Bob Wisely.
Hansford’s superb weekend in the Multispares Torana saw him seal ProAm over Adam Bressington and Adam Garwood, while Shannon O’Brien was the best of the locals in the Queensland TransAm series competition, edging out Geoff Fane.
John Bowe’s race two victory saw him beat Steve Johnson and Eddie Abelnica for the ProMasters round win.
With three rounds of the 2017 Touring Car Masters series remaining, Adam Bressington and John Bowe are now tied at the top of the overall standings, with 529 points apiece. Johnson sits third (517) with Ryan Hansford (482) now fourth thanks to his strong weekend in the Multispares Torana.
Jason Gomersall has jumped to fifth place overall, with 461 points, with Garwood, Abelnica, Mason, King and Tilley rounding out the top-10.  The next round of the Touring Car Masters will see the series’ return to suburban Melbourne for the Sandown 500 in September.
Race Two
John Bowe won his 90th Touring Car Masters Series race, storming from pole position to win at Queensland Raceway for the ninth time. The Wilson Security / PAYCE Holden Torana driver withstood a challenge from Steve Johnson at turn one to lead from lights-to-flag in another commanding performance.
Bowe also re-set the TCM Queensland Raceway lap record on the fifth of twelve laps, his 1m16.39s lap undercutting his old benchmark by 0.1 seconds.
Johnson started from the outside of the front row and made the superior start, looking to lead into turn one – however his Mustang locked its inside front brake and understeered wide: allowing not only Bowe but Eddie Abelnica through into second place. Johnson and Abelnica battled for second spot for the next two laps, running side-by-side through turns five and six in a terrific battle before the big Falcon was able to asset his position and hold on to second spot.
Johnson finished third, while Ryan Hansford held out Jason Gomersall for fourth place in a race-long battle between the pair of Holden Torana’s.  Adam Bressington scored solid championship points with sixth, but not before spending much of his race battling with Keith Kassulke.
Kassulke, a former TCM race and round winner, had held sixth for much of the race before spinning out of the position on the penultimate lap – handing the spot to Bressington. Adam Garwood stormed from the back of the grid to finish an outstanding seventh; backing up his impressive victory yesterday in the Dometic TCM Trophy Race.
Tony Karanfilovski ran sixth early in the race before spinning on lap eight, ultimately dropping to eighth place.
Shannon O’Brien was another to back up his impressive performance yesterday, finishing ninth, while Cameron Tilley rounded out the top-10 in the Valliant Pacer. The Anglomoil team had to replace a broken rocker in the car following dramas yesterday.
The race was run without major dramas, save for additional spins by Bob Wisely and Geoff Fane at turn two throughout the race. Allen Boughen ran strongly in the Mercury Comet before his car seemed to suffer a driveline issue on the penultimate lap – failing to finish.
O’Brien and his Pontiac TransAm has won 11 of 14 races in the local series to date this season and enjoys a comfortable lead in their series standings.