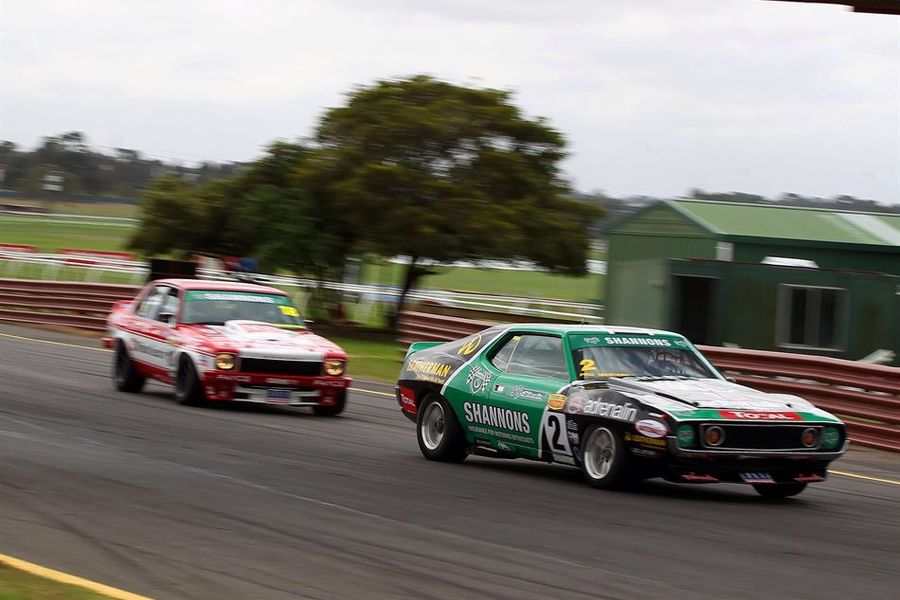 After Jim Richards reminded everybody of his King of Sandown crown with a win in Saturday's opening Touring Car Masters race, long-time river John Bowe returned serve on old rival Jim Richards in Sunday’s second race and Andrew Fisher charged to his first race win in the final round at Sandown Raceway.
Starting from third in Saturday's race Richards jumped second-placed Bowe on the rolling start and assumed the lead when polesitter Greg Ritter pulled to the side of the road with mechanical dramas on the second lap. The Chevy Monza driver had edged out Bowe for pole by 0.2 seconds earlier in the day however an apparent blown engine entering turn one at the start of the second lap forced him out of the race.With Ritter recovered under local yellow flags, what followed was an intense battle between Richards and Bowe with the Javelin’s straight-line legs just too much for the braking and cornering speed of Bowe’s Torana. Both cars lapped within 0.1s of the TCM Sandown lap record during the battle with Bowe falling just 0.2s short at the line after a sensational fight that lasted the entire race.Today’s triumph was the 9th Sandown TCM victory and 20th podium finish for Richards in his 25th start at the historic Melbourne venue. Steven Johnson finished third in the Synergy Race Engines GTHO Falcon, shading the dicing pair out in front of the field. Behind the leaders, Tony Karanfilovski finished a sensational fourth and first in ProAm class after a superb run. The Sydney driver finished just two seconds behind Johnson in his TIFS Warehousing Ford Mustang TransAm.Eddie Abelnica finished fifth and Jason Gomersall a storming sixth, having started the race ninth in the iSeek Racing Torana. Andrew Fisher charged to seventh in the Jesus Racing Falcon, Paul Freestone eighth, Adam Gar Wood ninth and Mark King 10th in the King Springs / Whiteline Racing Camaro.Glenn Seton failed to finish after pulling off to the side of the road on lap three with damage to the front of his car, while Greg Garwood was one of several drivers caught up in a lap one, turn one drama at the start of the race – though all cars were able to re-join without issue. Seton's damage was related to the turn one drama.
After the epic battle in Saturday race, Bowe made the better start in race two in Sunday morning and took an early lead he’d never lose, pulling away and re-setting his own lap record on the way to the race win. Richards then dropped into the clutches of Steven Johnson, the pair racing side-by-side up Sandown’s long back straight before the Synergy Race Engines GTHO was able to slip past the Shannons Javelin.
It was classic racing from two of the fastest cars in a straight line at Sandown.Tony Karanfilovski backed up his race one fourth place with the same result in race two, with Mark King charging forward five places to climb from 10th on the grid to fifth. Eddie Abelnica finished sixth, while Greg Ritter and Glenn Seton stormed from the back of the field to seventh and eighth, respectively, following their race one dramas.Jason Gomersall and Andrew Fisher survived an early clash at turn one to complete the top 10.The reversed-grid Waeco Trophy Race that closed the TCM weekend saw the Jesus Racing Falcon of Andrew Fisher take an early lead from second on the grid, the big GHTO untouched out in front en route to score the first win for the popular driver since joining the Touring Car Masters Series.Mark King backed up his strong Sunday form with second in the King Springs / Whiteline Racing Camaro while John Bowe stormed from what was essentially last on the grid to third in his Torana. Glenn Seton and Eddie Abelnica completed the top five in a fantastic race that saw sensational racing as some of the faster cars worked their way through the pack. Adam Garwood finished sixth outright and was also the ProSport winner of the Waeco trophy race.Starting from pole, Cameron Tilley was initially swamped as the big horsepower cars stormed past his Anglomoil-supported Valliant Pacer – though the Sydney racer was later able to reassert his position in the race to grab seventh. Paul Freestone, Jason Gomersall and Steven Johnson completed the top-10.The highly competitive round at Sandown has closed up the points standings in all three of the major TCM classes after two of eight rounds this year.John Bowe moves to the lead of the ProMaster standings, holding a narrow lead over former teammate Steven Johnson and the ever consistent Eddie Abelnica.Round one winner Greg Ritter has slipped to fifth in the standings – behind Mark King – following his challenging weekend at Sandown that included two non-finishes.iSeek Racing Holden Torana driver Jason Gomersall now narrowly leads the ProAm standings ahead of Clipsal 500 victory Paul Freestone, Andrew Fisher’s storming performance at Sandown leaping him to third in the standings.Tassie teenager Adam Garwood leads ProSports after two rounds and a series of outright-contending performances across the first two rounds of the season.The next round of the Touring Car Masters will see the series travel to regional Victoria, joining the V8 Supercars at Winton Motor Raceway near Benella on May 20th and 21st
Sandown Raceway. Jim Richards King of Sandown Touring Car Masters race John Bowe