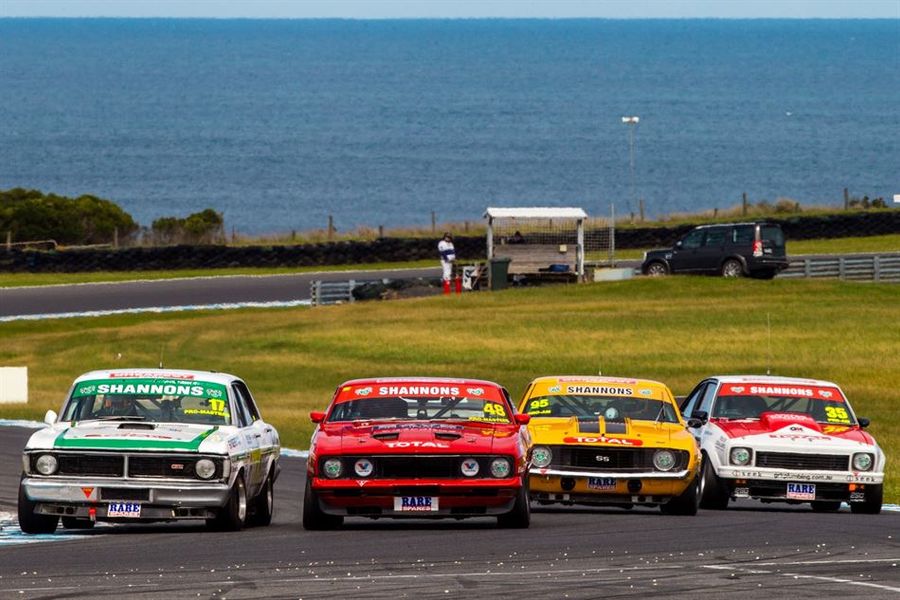 John Bowe won both Sunday Touring Car Masters races at Victoria’s Phillip Island Grand Prix circuit, while Adam Bressington was the big winner in the ProAm class for the first time. After battling with Glenn Seton in the second race, Bowe battled through the field in the WAECO Trophy Race to edge out his margin over Eddie Abelnica in the TCM standings.
Thanks in part to his storming victory in race one on Saturday, Abelnica finished second overall this weekend, tied on points with Glenn Seton.
Bressington’s ProAm victory came thanks to a trio of strong performances that included top five finishes in the opening two races, and a string of fastest laps in the trophy battle. He beat Jason Gomersall and Brett Youlden to be on the ProAm podium – his first round win for Whiteline Racing since he re-joined the championship at Queensland Raceway last round.
Graham Stewart beat Adam Garwood by one point in the ProSports battle while Darren Beale finished third.
Bowe won race two after a race long battle with old rival Glenn Seton, the pair finishing 1-2 for the third time in four races this year. Abelnica led the field into turn one and held the top spot for the first lap, before Bowe’s Torana was able to work his way past at turn one on the second lap. Seton, too, soon passed Abelnica – who would ultimately drop to fourth place at the finish – while Steven Johnson stormed his way to third place, having started seventh.
Adam Bressington continued his strong form, backing up fourth in race one with fifth in the second, though his race was filled with battles in front and behind. At the same time as attacking Abelnica, the Fabre / Whiteline Racing Camaro driver was busy defending advances from Jason Gomersall for much of the race. Gomersall passed the Camaro on the final lap, however was quickly re-passed by Bressington in a great bit of racing.
Brett Youlden, Jim Richards, Mark King and Tony Karanfilovski completed the top-10.
Brett Youlden and Mark King led the field away in the trophy race, however it didn’t take long for Bowe to work his way to the front and the lead of the race. The highlight was a lengthy battle for second and third between Tony Karanfilovski and Steven Johnson – one that waged for much of the 10-lap race.
Resolute in his defence, Karanfilovski withheld the advances of Johnson (driving Tony’s Falcon) and was able to finish second – his second top three race finish of the year. King and Youlden completed the top five, with Glenn Seton, Adam Garwood, Jim Richards, Rusty French and Leo Tobin completing the top 10.
Garwood won the ProSports trophy and Karanfilovski the ProAm.
The next round of the Touring Car Masters will see the series return to Mount Panorama alongside the Supercheap Auto Bathurst 1000.
Touring Car Masters races Adam Bressington Victoria’s Phillip Island Grand Prix circuit ProAm class John Bowe