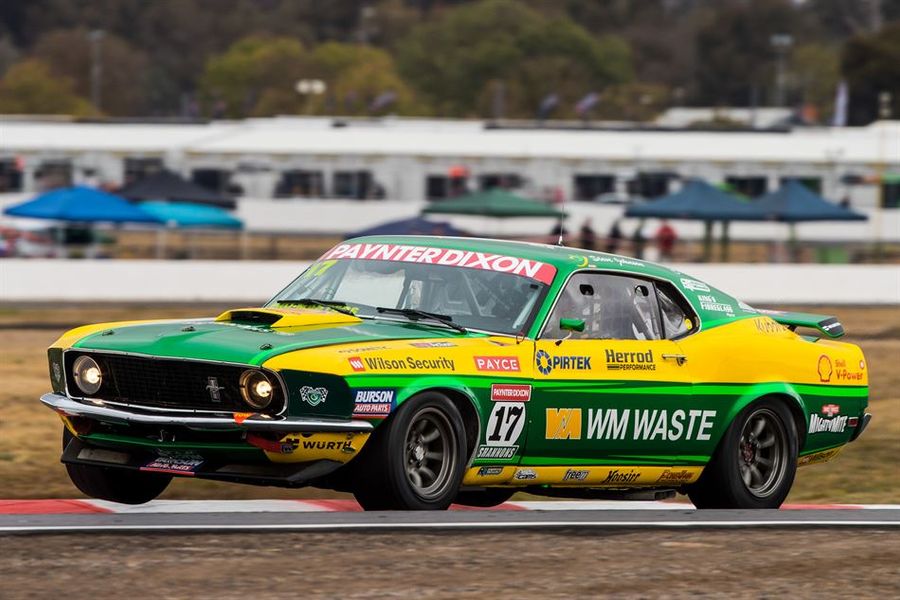 Steven Johnson scored his second Paynter Dixon Touring Car Masters pole position of the 2018 season, beating old rival John Bowe to the top spot in tricky Winton conditions today.  Johnson’s 1m29.08s lap came on his fourth of four flyers and was good enough to best Bowe by 0.6 seconds, though it wasn’t quite as simple as that.

Earlier persistent rain had left the track sodden for much of the morning, only stopping within the hour prior to qualifying commencing. As such the circuit was continuing to improve throughout the 20-minute session; Johnson banking his time late before then sitting nervously in pit lane for the last six minutes as he watched to see if anyone could best his time.

They didn’t – Bowe also relegated to the lane when his car broke an exhaust during the session.

“I waited at the end there just waiting to see what JB would do and if he would pull another last-ditch flyer,” Johnson said. “I had a small lockup on my last lap so I wanted to pit and check that out and we decided to wait.

“It was pretty dicey out there and if you put a wheel off line it was really slippery. It was a challenging session but the result in the end was pretty good.”

It was the ninth time that Johnson and Bowe - or Bowe and Johnson - have shared the top two spots in qualifying since competing head to head in TCM for the first time in 2015. Johnson has the edge between the pair too, with five poles to Bowe's four when the pair get on the front row.

Ryan Hansford got to within 0.1 seconds of a front-row berth in the Multispares Torana, ultimately having to settle for third place but well within contention with the championship leaders.

Adam Bressington will start race seven of the championship from fourth place, improving rapidly across the session to put his VDC / Whiteline Racing Camaro on the second row. It was a strong rebound for Bressington after battling an issue that restricted his Camaro to seven cylinders in the earlier practice session.

His teammate Mark King was fifth, just 0.5 seconds behind Bressington in a strong day for the Adelaide team.

Cameron Tilley saved his best to last, climbing from outside the top-10 to sixth position on his 10th and final lap of the session. Tilley was amongst the last cars across the line in the session, jumping up the order well after the chequered flag to rocket up the order.

Andrew Fisher was another late improver, with the Jesus Falcon ending up seventh.

Cameron Mason qualified eighth but was unable to take advantage of the improving conditions at the end of the session when his car broke a diff pinion seal and dumped oil on the circuit. The car will be fixed for tomorrow.

Earlier in the day, torrentially wet conditions greeted the field for the sole practice session, also topped by Johnson. Hansford was second, with Bowe, Gomersall and Karanfilovski completing the top five in the rain.
Dry conditions are expected to continue for the remainder of the weekend.

Racing commences at Winton on Saturday with the Dometic Trophy Race at 11:30am on Saturday morning.

Race Seven in the championship will be held later in the afternoon at 2:10pm, with races Eight and Nine to be held on Sunday.