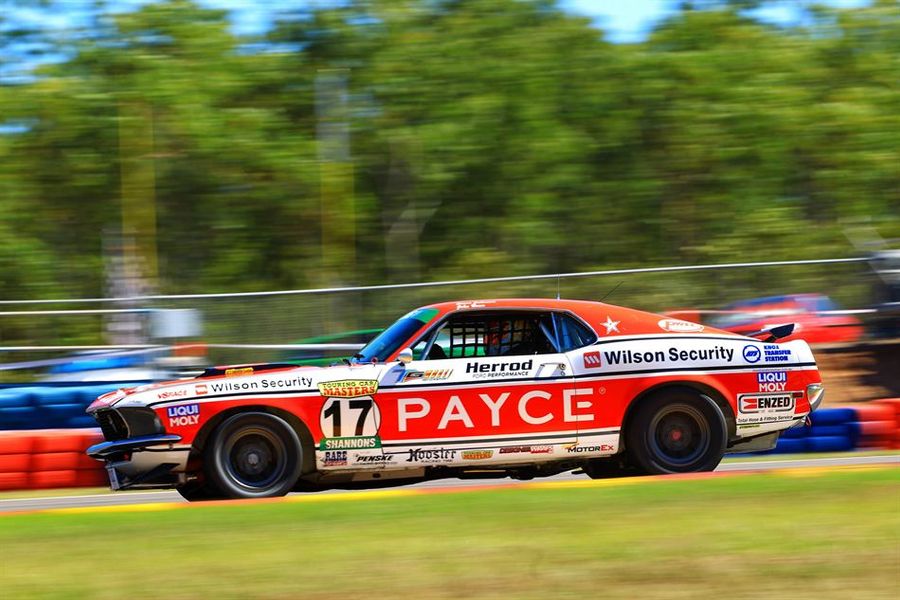 The Bowe and Johnson show will continue during round five of the ENZED Touring Car Masters series at Queensland Raceway this weekend. Racing's ‘first family’ will be reunited under the John Bowe Racing banner once again at the V8 Supercars Coates Hire Ipswich Supersprint, Steven Johnson to take the wheel of Bowe’s 1969 Ford Mustang for the Shannons Queensland Tourist Trophy after winning the most recent round in Darwin.

Having been beaten by his own car in Darwin last month, Bowe will be keen to get one back on Johnson when he returns to the wheel of the Holden Torana SL/R 5000 in which he won the Winton round in earlier this year. Already with two wins at Darwin - netting him the round victory in the process – and having dominated all three races in Tasmania earlier this year whilst deputising for Bowe, Johnson said he was keen to return to the wheel of ‘Sally’ on home turf.

“I’m stoked to be able to go head to head with JB again, this time in my home state of Queensland,” said Johnson. “We've gained some momentum and understanding of ‘Sally’ in the TCM category and I’m thoroughly enjoying it. I must admit, it’s tough up the front - I've got quality racers like JB running so strongly in Gary O’Brien’s Bendigo Retro Muscle Car Torana with Andy Miedecke, Jim Richards and Greg Crick also dialling their cars in nicely.

“Queensland Raceway has been pretty good to me in the past and to race in front of my home crowd in a ‘69 Mustang - with great support from Payce, Wilson Security, WM Waste, Knox Transfer Station, TG Motorsport and Herrod Motorsport - it's really exciting for me. It’s been a few years since I've competed at QR. I'll have a lot of personal friends there watching so I better do well or I’ll never hear the end of it.”

Johnson will arrive back in Australia just in time for his third TCM round of the year, having jetted off to Europe last week for a flying visit to an iconic European endurance race.

“After a week long trip to Belgium to have a look at the Spa 24 hour, I get back just in time for Friday practise so hopefully jet lag won’t be an issue, I just want to race."

For his part Bowe – who edged Johnson for pole in Darwin but couldn’t topple him for the round victory – said he was keen to redress the balance and beat his own car at the vastly different Queensland Raceway.

“If I wanted an easy time (to race), there's no way I would do this - I love the Johnson family and Stevie is probably the most naturally talented driver I've ever met in over 40 years of racing," Bowe enthused. “It's great fun and really enjoyable for me, I love the challenge of trying to beat someone of his calibre, even if he's in my car!

“I love and believe in Touring Car Masters, I genuinely believe Stevie J adds incredible value to TCM.. I'm not so sure the other drivers share our/my enthusiasm though. Just for the record, Mustang Sally won her 65th TCM race in hands of Stevie's J at Darwin in Race 2. She's truly legendry in my eyes.”

The fifth round of the popular Muscle Car series will be bolstered by the addition of a host of local competitors from the Queensland TransAm Series, eight of the local runners to join the grid this weekend including legendary Bathurst veterans Charlie O’Brien and John English. Four different drivers have topped the outright, ProMaster class standings so far this season, with Andrew Miedecke’s Lubrimaxx Chevrolet Camaro the latest to take the points lead.

Miedecke, second-placed Jim Richards’ AMC Javelin and Greg Crick’s Chrysler Charger in third are covered by just 25 points heading into the second half of the season. Early-season points leader, two-time champion Gavin Bullas, will sit out the Queensland round after the engine dramas suffered by his 1970 Ford Mustang proved too much to repair in time for the Ipswich event.