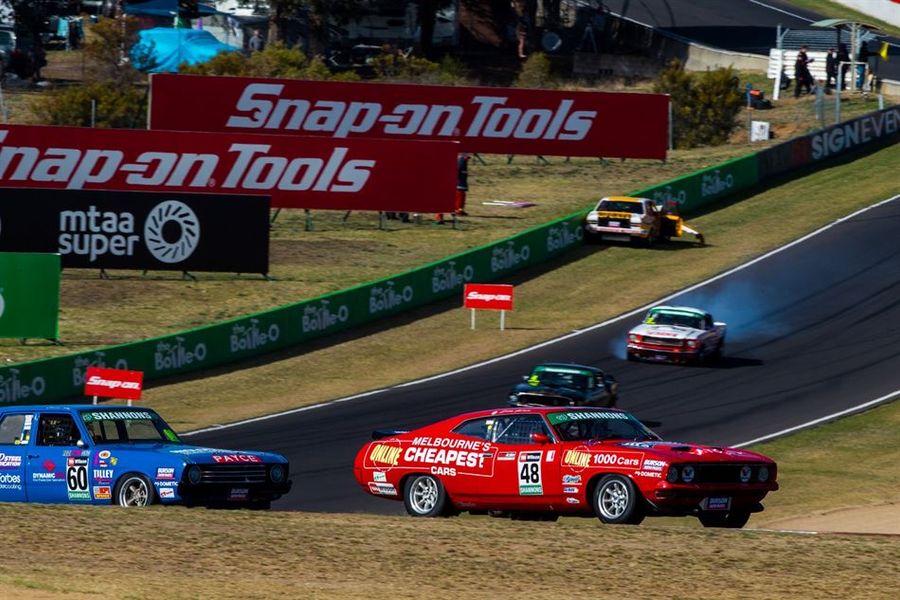 The Touring Car Masters series produced a pair of Bathurst thrillers as Eddie Abelnica and Steven Johnson split the honours for Ford at the Supercheap Auto Bathurst 1000 today.  Abelnica edged out the Valliant Pacer of Cameron Tilley to win the jumbled grid Dometic TCM Trophy Race in the morning, while the afternoon’s affair was a tense battle between Johnson, John Bowe and Adam Bressington for the top three spots in the championship race.
The Trophy race started with Tilley and Cameron Mason on the front row, and the pair battled furiously for the opening lap. Tilley led early, before Mason passed at the Chase with an enormous move around the outside of the 220km/hr kink, surviving a huge brake lock up to take the lead.
The Mustang Fastback was only in the lead for a short time as a badly flat-spotted left front began to take its toll, Tilley re-passing the Ford and establishing a solid lead in his six-cylinder Valliant.
The biggest mover, however, was Eddie Abelnica, who stormed his way through from the middle of the field to contend for a top three spot by mid-race. After enduring engine dramas yesterday, an overnight powerplant change saw the Falcon back on song today and he stormed through the field. He was second by the end of the fourth lap, and set about chasing down the leading Valliant – which had escaped to a two second margin out in front.
With the Falcon more than 30km/hr faster down Conrod, Abelnica powered past Tilley just before the chase on the penultimate lap to assume the lead. The move was initially contentious due to a yellow flag area at the beginning of the chase, though the Melbourne driver was later cleared, having completed the pass before entering the yellow flag zone.
The yellow was for the stranded Bob Wisely Torana, the Queenslander having crashed on the entry to the chase on the opening lap. Abelnica ultimately won the race – his second of the season – while Cameron Tilley equalled his best ever TCM race finish in second.
Rusty French scored his first top three finish by holding out John Bowe in a race to the line, while Paul Freestone and Adam Garwood completed the top five. After leading early, Cameron Mason failed to finish after a engine failure on his Mustang.
The second race started with grid positions based on qualifying, Steve Johnson leading the field into turn one. John Bowe muscled Adam Bressington out for second on the run up Mountain Straight, setting up an intense fight between the pair for much of the race. Bressington remained in close company with the Holden Torana and set up a thrilling exchange when they ran side-by-side through turns two and three – on the run into the Cutting – on the third lap.
Once Bowe was clear of the Whiteline Racing Camaro, he set out in pursuit of the leading Mustang and set a new lap record (2m17.5309s) in his attempt to catch Johnson. He closed to within half a second on the final lap, though Johnson was strong enough to hold on to record his fourth win of the 2017 season.
With Bowe second and Bressington third, Torana drivers Adam Garwood and Ryan Hansford completed the top five.
Eddie Abelnica, Andrew Fisher, Jim Richards, Mark King and Tony Karanfilovski completed the top-10.
In a shocking day for the AC Delco Torana, Bruce Williams failed to finish both races while Terry Lawlor (Gearbox) was another non-finisher.
The final race of the penultimate round of the 2017 season will be held tomorrow morning. With one race of the round to go, John Bowe provisionally leads Steve Johnson by 14 points in the overall TCM Standings, with Adam Bressington third, a further 3 points back. Ryan Hansford remains in contention just 67 points from the lead.
Race One:
1    Eddie Abelnica (Ford Falcon XB Coupe) 14m18.4008s
2    Cameron Tilley (Valiant Pacer) 14m19.9460s
3    Rusty French (Ford Mustang Fastback) 14m26.6885s
4    John Bowe (Holden  Torana SL/R) 14m27.0248s
5    Paul Freestone (Chevrolet Camaro) 14m38.1923s
6    Adam Garwood (Holden Torana A9X) 14m38.6756s
7    Andrew Fisher (Ford Falcon XY GT HO) 14m38.8059s
8    Ryan Hansford (Holden  Torana SL/R)  14m40.2421s
9    Geoff Fane (Chevrolet Camaro SS) 14m40.9087s
10   Wayne Mercer (Ford Falcon XY GTHO) 14m49.5201s
Race Two:
1    Steve Johnson (Ford Falcon XY) Six Laps in 13m52.7518s
2    John Bowe (Holden  Torana SL/R) 13m53.2632s
3    Adam Bressington (Chevrolet Camaro SS) 13m56.5389s
4    Adam Garwood (Holden  Torana A9X) 14m01.3214s
5    Ryan Hansford (Holden  Torana SL/R) 14m04.6332s
6    Eddie Abelnica (Ford Falcon XB Coupe) 14m04.9552s
7    Andrew Fisher (Ford Falcon XY GT HO) 14m12.6188s
8    Jim Richards (Ford Falcon Sprint) 14m15.2221s
9    Mark King (Holden  Monaro GTS) 14m20.6545s
10   Tony Karanfilovski (Ford Mustang Trans Am) 14m21.3751s