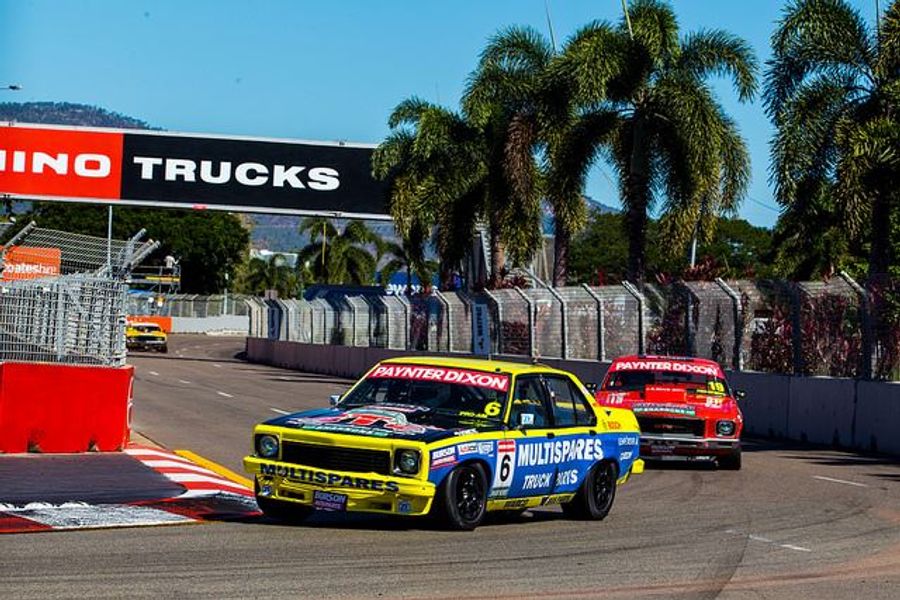 A dramatic day in North Queensland has handed Ryan Hansford his first ever race win and returned John Bowe to the pointy-end of the Paynter Dixon Touring Car masters standings. Steven Johnson had looked set to build on his championship lead, heading the field from lights to flag in race two to back up his Saturday victory.

He then jumped to a lead in the third and final race, before a broken throttle cable on the fourth lap scuppered any chance the WM Waste Ford Mustang driver had of taking his fourth-straight round victory - quick repairs in pit lane not enough to see him classified a finisher.

Bowe’s path to the round victory was not yet clear, however, after he was forced to charge through the field in race three. He and Bruce Williams made contact at the start as the field rushed into turn two, with both cars dropping to the rear of the field.

He stormed back through the pack to ultimately finish third and just do enough to secure the overall victory.

Bowe won the round by just four points, with Bressington second for the second straight round. Tony Karanfilovski was third overall and first of then ProAm runners, while Ian Woodward won the ProSports class in his Chevy Camaro.

Johnson’s non-finish and Bowe’s overall victory saw the Holden Torana regain the championship lead he lost in Darwin three weeks ago. Bowe now leads Johnson by 18 points, with Bressington closing in on both in third place.

Meanwhile, Hansford was another driver on the recovery path following his non-finish in race one on Saturday thanks to a broken gearbox. He stormed to seventh in race two and then an incredible opening lap that saw him avoid the chaos at turn two elevated him to second place.

After several rounds of technical issues and plain old bad luck, Hansford’s fortunes then changed further when Johnson struck issues. He grabbed the lead when the Mustang faltered and was never headed from there, becoming the sixth different winner this season and the third different first-time race winner of the year.

It was also the first win for the Peters Motorsport / Multispares Racing Torana outfit.

Hansford also ended a long streak of near-misses during his TCM career, having scored 10, top-three finishes prior to his maiden victory on a sunny Sunday in North Queensland. It was a remarkable comeback that essentially saw him storm from last to first in two, 12-lap races.

Tony Karanfilovski won the ProAm class thanks to a trio of consistent performances across the three races. The TIFS Warehousing Mustang driver qualified poorly after his car broke a gearbox, however finishes of seventh, sixth and fifth ensured a strong points haul.

Bruce Williams had led the class all weekend and was unlucky to not take the win following his contact with Bowe early in the third race – the AC Delco Torana having shown front-running pace with a pair of fourths in races one and two.

Rob Hackwood was third in the ProAm class, completing a strong weekend for Wellpro Racing and the Pontiac Firebird. After finishing sixth in race one, he dropped to ninth in the second before rebounding back into the top six later on Sunday afternoon to cap off a strong weekend.

Also enduring more misfortune than usual was Andrew Fisher, who showed plenty of speed in the Jesus Racing Falcon throughout the weekend. He followed Hansford through the pack to eighth place in race two however could only limp home to twelfth in the finale’ after his car was jammed in third gear.

Ian Woodward’s ProSports win came in just the third round for the Fataz racing Camaro team. The Queenslander headed home Darren Beale and Jim Pollicina in the class standings this weekend.

The Paynter Dixon Touring Car Masters series now takes a well-earned break ahead of the next round at the Sandown 500 in September.