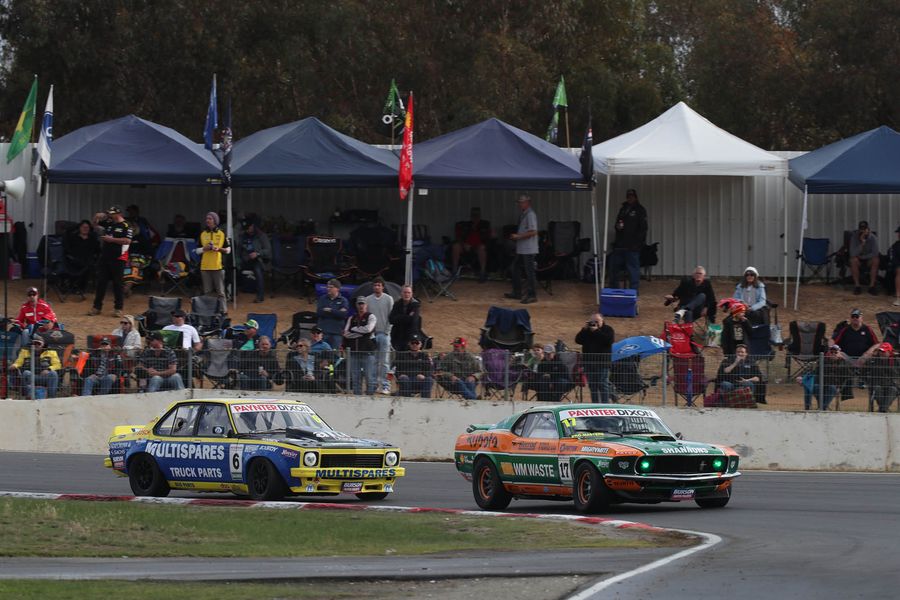 Steven Johnson has continued on his winning ways in the Paynter Dixon Touring Car Masters – but it was the thrilling finish to the Dometic Trophy Race that stole the show on Saturday at Winton Raceway.

Johnson, who had won all five championship races contested in the season to date, led from lights to flag in today’s race to edge out Ryan Hansford and an impressive Adam Garwood in race seven of the season.

However it was the remarkable finish between Andrew Fisher and Bruce Williams in the Trophy race that left the fans talking.

The race started on a damp circuit however a mid-race shower saw it finish with the field on slick tyres and struggling for grip. Fisher’s Jesus Racing Falcon GTHO and Williams’ AC Delco Torana had battled for a majority of the race, the pair having started from the front row. After several close moments throughout the duration, Williams got a strong run out of the final corner as the pair raced to the flag.

As he drew alongside Fisher’s Falcon as they approached the line, his Torana hit a patch of water on the circuit and slewed sideways into the red Ford; As they crossed the line they made contact – Fisher winning the race – with each spearing off the circuit in different directions.

While Fisher flew off the road into the turn one grass, Williams’ Torana was spectacularly launched into the air as he crossed first the old Winton circuit and then a dirt access road on the infield. The remarkable finish saw Fisher record his second TCM win by 0.07 seconds in the closest finish in series history. See video here: https://www.facebook.com/supercars/videos/593120861181237/

Adam Garwood finished third in a storming drive in the Whiteline Racing Camaro, storming through the pack on his debut with the team while Sven Burchartz revelled in the wet conditions and stormed his Porsche 911 IROC through to fourth place.

The afternoon’s championship race, the first of three this weekend, was held in dry conditions and saw Johnson and Hansford battle for the lead into turn one – the Mustang grabbing the advantage. Hansford remained within a second of Johnson all race and finished within a car length of the championship leader.

Garwood finished third for the second straight race, having qualified fourth on his debut with Whiteline Racing, while John Bowe was fourth.

Aaron Seton made progress and finished fifth while Bressington also found himself up four spots in sixth.

Ryal Harris finished seventh, but had run higher earlier in the race in a battle for third place with Garwood. That came undone on lap 10; when contact with the rear of Garwood’s Camaro saw the front of his EFS Camaro suffer damage and drop him down the order.

The battle of the race was between Marcus Zukanovic and Sven Burchartz for eighth and ninth, while Jim Pollicina completed the top-10.

Races number eight and nine of the 2019 season will conclude the third round of the Paynter Dixon Touring Car Masters series, at 10:05am and 12:40pm respectively.