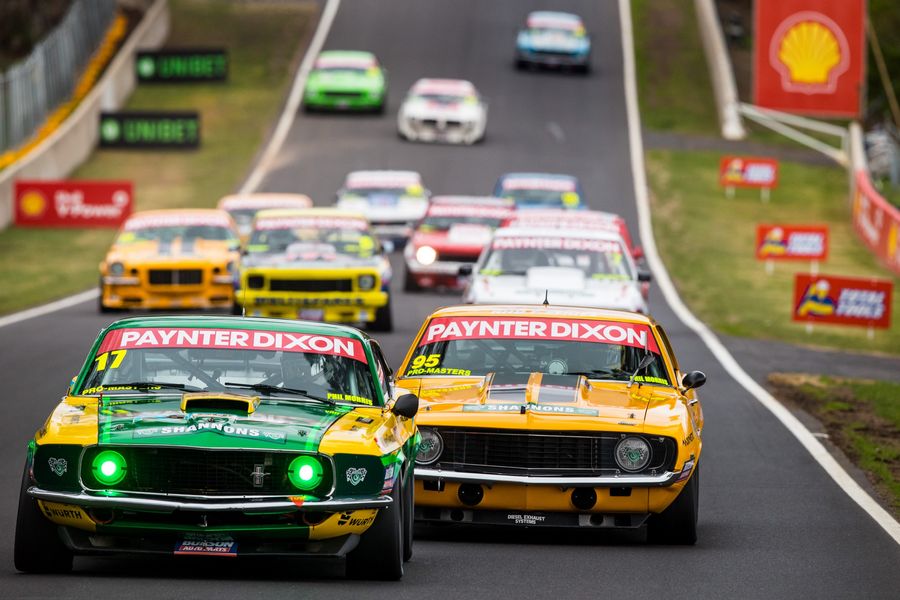 Steven Johnson won a wild opener to the Paynter Dixon Touring Car Masters’ annual visit to the Supercheap Auto Bathurst 1000 at Mount Panorama. Johnson led today’s six-lap race, the 19th of the championship season, from lights to flag to record his 13th win of the year.

John Bowe charged from eighth to second in a stout recovery drive in his Holden Torana, while Mark King fought his way throughout the race to grab the final step on the podium.

A competitive opening lap saw Johnson edge Bressington through turn one and grab an early lead, while Bressington settled into second, ahead of Ryan Hansford, Jim Pollicina and Andrew Fisher. The field made it to Reid Park, however it was on the climb up the mountain where trouble started – contact between Brad Tilley and Ian Woodward seeing the 1969 Chevrolet Camaro turned into the barriers on the entry to the right-hand corner just before Sulman Park.

Though Woodward emerged unscathed, the car was too badly damaged to be driven back – bringing the Safety Car on the circuit.

Other movers and shakers on the opening lap included Cameron Tilley, who charged from 14th to 9th, and Paul Freestone who after qualifying poorly made up four spots to end the first lap in 20th place. The race restarted with four laps remaining, Johnson again edging past Bressington at Hell Corner.

Pollicina, meanwhile, got the jump in the all-Torana battle for third place as the pair raced up Mountain Straight. Hansford’s day ended a lap later, when his car became jammed in gear as the field dropped down Mount Panorama on the fourth lap – ending his race in pit lane a non-finisher.

A highly competitive battle between Mark King and Andrew Fisher was a highlight, the pair swapping spots several times as they battled for fifth and sixth. They were both passed by Bowe, who charged to fourth by lap four, third the next lap and ultimately second at the finish.

The efforts of two key contenders ended on the penultimate lap; Bressington forced to pit lane from second place after his VDC / Whiteline Racing Camaro locked a brake at turn one. The lockup was serious enough to blow the left-front tyre on his car, forcing him to the pits for a replacement – ultimately finishing 25th to salvage some points for his ProMaster class title race.

Meanwhile, Fisher’s strong run ended on the same lap when his Jesus Racing Falcon GTHO also became stuck in gear, ending his day. The final lap saw Mark King slip past Pollicina to secure the final spot on the podium, while a competitive Tony Karanfilovski completed the top five.

Cameron Tilley revelled in his newfound V8 power by storming from 14th to sixth, while Brett Youlden was equally spectacular – moving his HQ Monaro up 10 spots from 17th to seventh. Brad Tilley was classified eighth, Dean Lillie ninth and Paul Freestone 10th – from 23rd on the grid.

In the first run in dry conditions, Jason Gomersall slipped from seventh to eleventh, with Jamie Tilley, Cameron Mason and Marcus Zukanovic next. The latter started from last place and passed 15 cars to work his way back towards contention for the next race tomorrow.