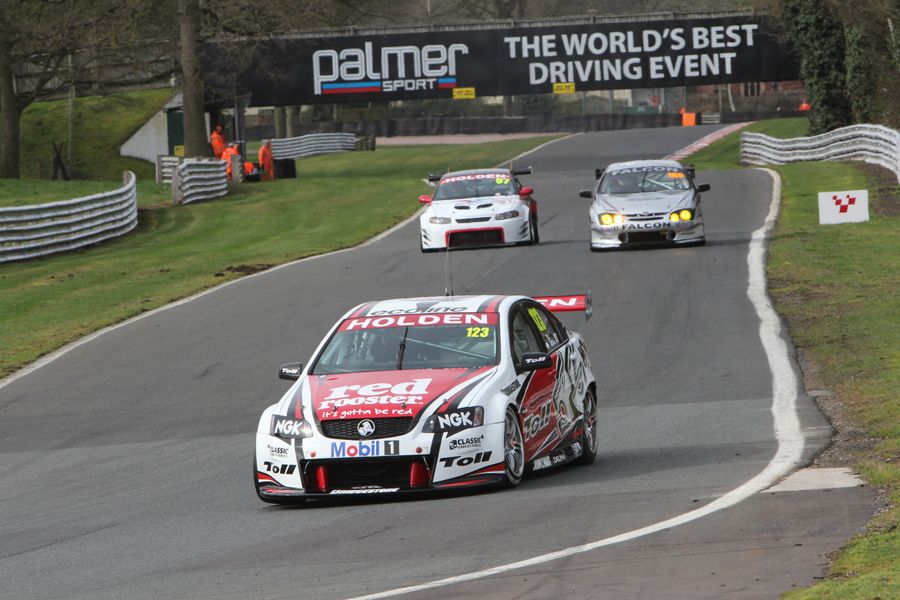 The Classic Touring Car Racing Club’s first meeting of the season, blessed with fine spring weather, took place at Oulton Park on Saturday Match 23rd, and produced some excellent racing around the sweeps and swoops of the undulating track which winds its way around the beautiful Oulton Park countryside. Mark Osborne and AJ Owen particularly enjoyed the experience as they raced home to double victories.

Stephen Primett claimed pole position by almost a second from David Howard, but the ‘83 current champion made a poor start and his faithful Escort Mk.1 was beaten away from the line by 5.3 litres of prime Jaguar muscle. Indeed, by the end of the opening lap Primett was back in fourth place behind Howard, Osborne and Mark Cholerton’s neat Escort Mk.2 RS2000. These four scrapped furiously for most of the race as Primett eventually squeezed past Osborne and then took the lead when Howard took to the grass. Osborne was harrying Primett mercilessly and when the leader’s Escort developed a misfire on the last lap the Dolly surged past to win. “Any one of us could have won it” declared Osborne. But the unexpected star of the race was CTCRC debutant Mike Luck, a BMW restorer, who put in a late charge to seize second place with his pristine orange E21 320.

The second race was another thriller. Although Osborne led from start to finish he was pushed all the way by Luck. And Primett came through from fifth on the first lap to overhaul Cholerton and Howard and claim third place. The first four home were covered by just one and a half seconds… This time Greenhalgh dominated the ’66 category while series sponsor Paul Inch beat Stanford  to second pace by just a length. With more than 30 cars on the grid and a noticeable speed differential considerable care was needed when lapping the slowest cars. “I was never too sure if they had seen me in their mirrors” said Osborne. Class winners: Howard, Greenhalgh, House, Inch, Stanford, J.Margalies, Yates, Harris, Simon Knight (Hillman Imp).

Although AJ Owen qualified his Civic Type R more than two seconds clear of his nearest rival, Don Hughes (Peugeot 309 SXi) it was Andy Cripps (BMW M3) who stormed through from the second row to seize the lead. But by the end of the opening lap AJ was back in front and pulling away from Cripps and Ross Craig (Civic Type R) as Hughes pulled into the pitlane. But Cripps was losing ground and he soon succumbed to pressure from Craig and Graham Myers, who was racing his recently-acquired BMW M3 for the first time.

Current champion Ian Bower had to start from the back of the grid but his M3 charged through the field to finish fourth. Mark Kimber (2-litre Fiesta) was a clear winner of the ’05 category. Class winners: Craig, Myers, Martin Shepherd (2.8 VW Vento), Andrew Sheraton (BMW 325i), Nathan Heathcote (Ford Puma), Josh Barber (Renault Clio).

This was a much more orderly affair with Owen leading Bower, Craig, Myers, Shepherd and Sheraton from the first lap to the last. “I just tried to stroke it home while I kept an eye on my mirrors” said Owen afterwards. Bower won the ’93 category this time while Kimber won again in ’05. Class winners: Bower, Craig, Shepherd, Sheraton, Kimber, Heathcote, J.Barber.

Classic Thunder certainly lived up to its name with four Aussie V8s bellowing away on the front two rows of the grid as they waited for the green light. CNC Heads MD Ric Wood and his ex-Rick Kelly Holden Commodore claimed pole position almost three seconds better than Andrew Wilson’s Monaro. But it was Wilson who stormed away at the start chased by Andy Robinson’s Ford Falcon, Wood and Paul Eaton (Holden Commodore). In the early laps Robinson continually challenged for the lead, closing up under braking but losing out to Wilson as they accelerated out of the corners.

Then Wood ripped past them both in quick succession and soon pulled away. After four laps Wilson’s Monaro pulled off as they passed the pits, leaving Robinson to chased Wood all the way to the chequered flag. Matthew Booth’s ex-BTCC Astra finished third, ahead of Eaton and Piers Grange (2.5 Ford Escort Mk.2) who won a poorly-supported BOSS category. Class winners: Booth, Eaton, Grange, Ralph Higson (2.4 Escort RS2000).

Wood was a non-starter (his thirsty beast ran out of fuel!) and Robinson retired after two laps, so Wilson had a clear run to victory, despite having to start from the back of the grid. Booth held on to second place until the very last lap when he was pipped by Eaton. Grange missed out on a podium place by less than a second, although once again he was the best of the BOSS runners. Class winners: Eaton, Booth, Grange, Higson.