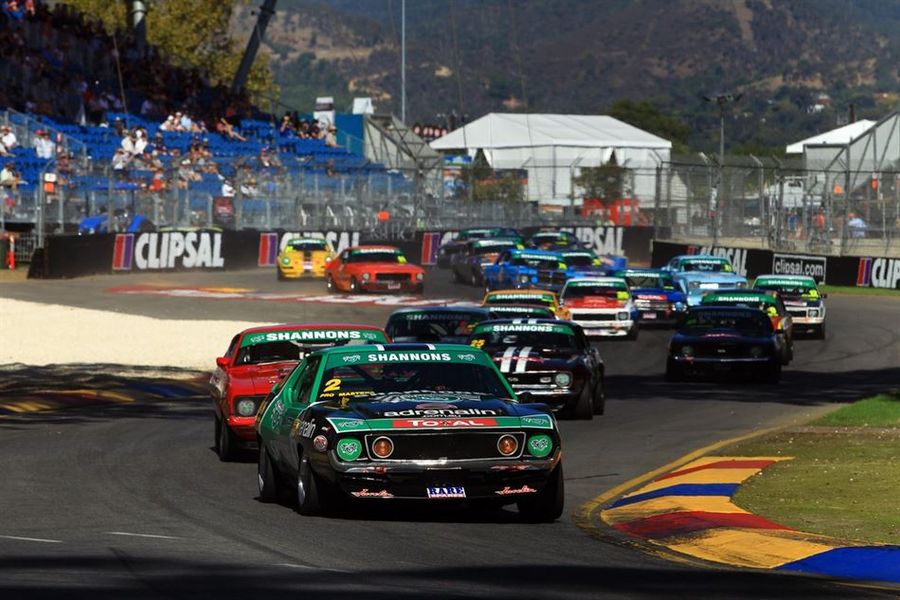 Click on the Video tab for 2016 action - race two from the Touring Car Masters series in Adelaide!
The Touring Car Masters series will make a 10th visit to the iconic Clipsal 500 Adelaide this week, the series having visited the famous parklands circuit every year bar one since its formation in 2007. The category has entrenched itself as a fan favourite of Adelaide fans with the demanding street circuit often throwing up highly competitive racing, new victors and great stories.
Amongst the talking points this weekend includes the debut of Team Johnson – the new TCM outfit established recently by Dick and Steve Johnson – and their Ford Mustang, the racing return to Adelaide of legends including John Bowe and Jim Richards, plus a host of new machinery and stunning cars from the classic pre-1978 muscle car era.
Only Sydney Motorsport Park in New South Wales has held more TCM rounds than the Adelaide Parklands circuit, and as such the Clipsal event has built a significant history within the category.
Unsurprisingly, defending TCM ProMasters class champion John Bowe holds a majority of the winning records in Adelaide, his three round wins establishing him as the most successful driver on the circuit in TCM machinery. However, all of Bowe’s success came in his old Ford Mustang – this year in the hands of Steven Johnson – and the Tasmanian is yet to win there in his current Holden Torana SL/R 5000.
Bowe also holds the record for most Clipsal 500 poles (six), most in a row (five consecutively between 2010-2015) and, remarkably, has started on the front row every year he has raced in the category at the circuit – only missing the first round in 2007. Qualifying on pole isn’t a certainty for success in Adelaide though – on four of the nine visits TCM has made to the Clipsal 500, the driver who qualified on pole position has gone on to win the first race of the weekend.
Inaugural TCM champion Steve Mason – whose son Cameron will race this year - racing legend Andrew Miedecke, two-time TCM champ Gavin Bullas and last year’s victor Greg Ritter have also tasted the champagne on the Adelaide podium. Bowe and Bullas lead the way on race victories with six apiece, though only Bowe will be able to increase that this year.
Ten different drivers have won TCM races on the streets of Adelaide, while the last nine races held since 2014 have been won by six different drivers – showing off the unpredictable nature of racing at the ‘500.
Ford fans will enjoy the 14-12 margin the blue oval products – Mustang and Falcon GTHOs – hold over their Chevrolet rivals, while Holden remarkably scored their first ever Clipsal 500 TCM win last year in the hands of Tassie teenager, Adam Garwood.
Eddie Abelnica holds the race lap record (1m29.82s), while Glenn Seton set the qualifying benchmark last year at 1m28.33s. The qualifying record has tumbled by 8.7 seconds since the category first raced in Adelaide in 2007, while the race record has also been slashed by a similarly impressive 6.9 seconds in the intervening decade.
Twelve months ago, Greg Ritter’s brief stint in TCM saw him win the round thanks to a pair of race wins, the Victorian beating out John Bowe and Glenn Seton on the weekend. Adam Garwood won his first race in his brief TCM career in race three, storming to the front in the reverse-grid WAECO Trophy Race to beat Andrew Fisher and Andrew Miedecke to the flag.
Six different models of car featured in the top three finishing positions across last year’s three races.
Round 1 of the 2017 Touring Car Masters Series will be contested over three races; practice, qualifying and race one to be run on Thursday with one race on each of the following days.
Adelaide TCM Touring Car Masters Johnson Bowe