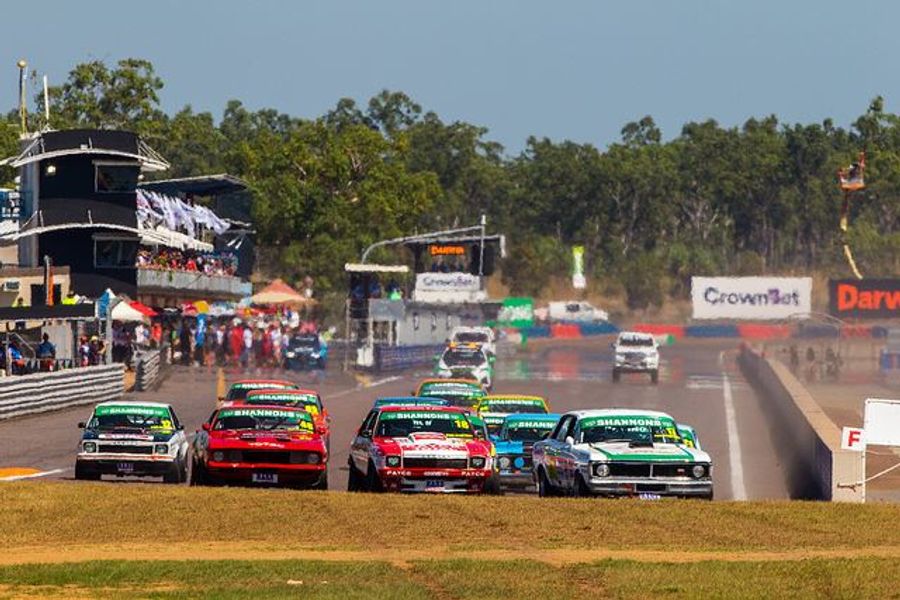 The stunning sunshine of the Northern Territory will be a renewing force on the Touring Car Masters field, as the series returns to the Top End for the tenth time this weekend. After the well-documented bruising round at Winton Raceway last month, a 24-strong field will return to Hidden Valley this weekend looking forward to the warm weather and bright sunshine that is a staple of the Crown Bet Darwin Triple Crown each year.
TCM has become a staple of the iconic Darwin event, having visited every year since the 2008 season. Last year the round was memorable for being dominated by Aussie-built Ford Falcons – Steven Johnson winning two races and the round in the XY GTHO he was driving, while Wayne Mercer raced to his maiden TCM victory in the third race in a similar car.
It was the first time in TCM history that a Falcon GTHO had swept every race of a round.
The Darwin conditions will be a welcome reprieve for TCM teams after a busy month behind-the-scenes between rounds. In a remarkable effort by everyone involved, all but one of the full-season TCM cars involved in the accident at Winton are expected to be back on track this weekend.
Repaired cars for Jason Gomersall (BigMate Racing Holden Torana A9X), John Bowe (Wilson Security / PAYCE Holden Torana A9X), Eddie Abelnica (Melbourne’s Cheapest Cars XB Falcon), Tony Karanfilovski (TIFS Ford Mustang Trans Am) and Andrew Fisher (Jesus Racing Ford Falcon GTHO) will all return to the circuit after huge efforts from their respective teams.
Mark King’s Whiteline Racing / King Springs Camaro continues to be rebuilt in the teams Adelaide workshop – however King, who sits second in the ProMaster class points, will still be on track this weekend with the team sourcing a borrowed car for the weekend.
TCM regular Nigel Benson has loaned King his HQ GTS 350 Monaro to ensure King can continue to accrue championship points this weekend.
The Queenslander is a former Darwin race winner – sweeping to the top spot in race two in 2014 – and will be keen to have a consistent points scoring weekend this time out.
The IROC Challenge Porsche 911s involved in the Winton accident were not scheduled to race in Darwin.
“The spirit in the TCM paddock is outstanding and that is shown by the efforts everyone has gone to in order to get everyone back on track in time for Darwin,” Category Manager Tony Hunter said.
“There are stories from every team of people going above and beyond the call of duty to get back on track, and as a category we’re very thankful to all the hard working people behind the scenes who put in so much effort to make the TCM grid the best looking field out there.
“We’re excited to return to Darwin for the tenth time and put on a great show for all of the Northern Territory fans who have shown us so much support over the years.”
Jim Richards returns to the grid this weekend, now back aboard his iconic Shannons Insurance Ford Falcon Sprint.  It will mark the first time the two-time TCM champion has raced at Darwin with the upgraded Falcon – now sporting 302ci Ford power.
The iconic Ford was a regular contender in Darwin with its existing 289ci engine, the horsepower boost set to offer Richards’ more opportunities to challenge at the pointy-end this weekend.
Richards is the only driver to have ever bested Bowe for pole position at Darwin, too – edging out his long rival by less than one-tenth of a second during the series’ 2010 visit. Bowe has been on pole in each of the other eight times TCM has visited Hidden Valley.
Darwin has become Steve Johnson’s most successful Touring Car Masters track, winning four of the six races and both rounds he has contested there. The Queenslander will return to the venue this weekend aboard the same Ford Mustang he won the 2015 round in – though this year it is sporting the green and gold livery of Team Johnson.
Though the new outfit, run by Steve and his famous father Dick, has had a challenging start to the season Johnson sits third in the ProMaster championship standings going into one of his strongest events of the year.
Eddie Abelnica is likely to be another contender for outright victory this weekend, having raced to his second ever TCM round victory last time out at Winton.
The wide-open Darwin field includes contenders Winton race winner Adam Garwood, ACDelco Racing’s Bruce Williams and Multispares Racing’s Ryan Hansford, each driving Holden Torana’s. Newcastle’s Cameron Mason led laps at Winton in his Shelby Mustang, while Valliant fans will have something to cheer for as Victorian Robert Braune makes his debut in Garry Treloar’s E55 Chrysler Charger.
The V8-powered Ford Capri of Greg Garwood – the father of young-gun Adam - will make its TCM return, while Allen ‘Cusso’ Boughen’s stunning 1963 Ford Mercury Comet will also return to the series.