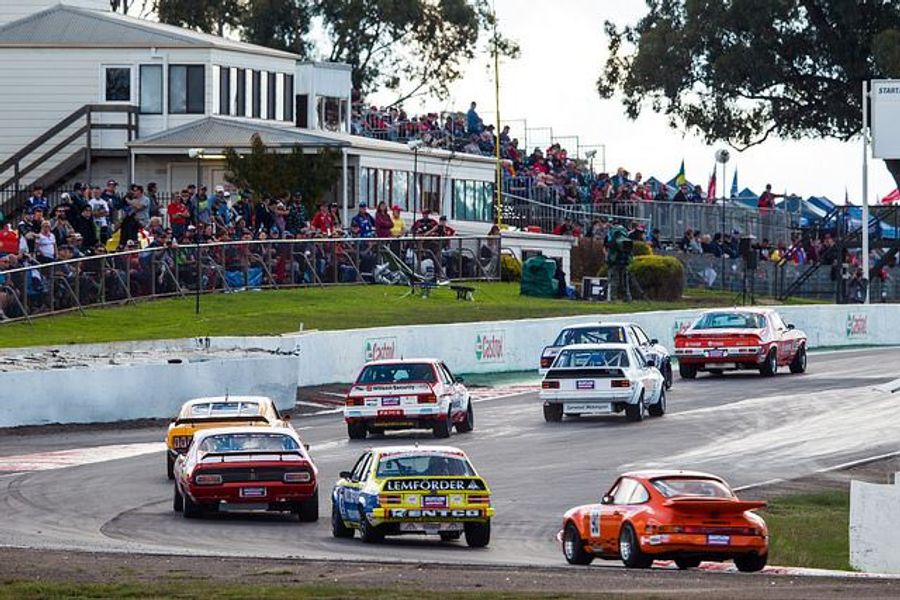 A host of new cars and drivers will add to the depth of the grid when the Paynter Dixon Touring Car Masters series continues at Winton Raceway this weekend. Races seven, eight and nine of the 2018 series, plus another thrilling Dometic Trophy Race, will feature a near 30-car grid and cars yet to have turned a competitive lap in TCM competition.

A hugely competitive start to the season has seen 2017 title rivals John Bowe and Steven Johnson trade victories this year; Bowe winning in Adelaide before Johnson went to clean-sweep the results in Tasmania last month. Adam Bressington and Jason Gomersall added their names to the winners roster via victories in the pair of Trophy Races held to date.

Bowe leads Johnson 415 points to 376 heading into a circuit where the Torana has dominated in recent years. The ever-consistent Cameron Tilley sits third in the championship, just 16 behind Johnson, while Gomersall and Jim Pollicina complete the top five overall. Pollicina (ProSports), Tilley (ProAm) and Bowe (ProMasters) lead their respective classes.

Winton marks the competitive racing return of well-known Super 2 series privateer, Aaron McGill. The Sydneysider has recently completed a ground-up rebuild of the ex-Doug Westwood Falcon GTHO once qualified on pole at Bathurst by Glenn Seton. Complete with the same engine that powered John Bowe and Steven Johnson to multiple TCM race victories when it powered Mustang ‘Sally’, the stunning Falcon is set to debut in McGill’s hands this weekend.

After 10 years and 76 rounds in the Super 2 series, McGill says he is ready to face the challenges of a new category after spending time with his growing family and establishing a new business.

“This is chapter one of a new story, were not looking to go out and break any records this early on, it is a new car, new category so for us it’s all about getting it right,” he said. “We've got some new sponsors on board to come along with us on the ride. Lifestyle Investments and APCD Australian Personal Computer Distributors.

“Learning from past experiences and knowing how important the engine is to the foundation of the car we've made a heavy investment so that in the long run we can be competitive in the Touring Car Masters”.

Joining McGill will be Queenslander Ian Woodward, who’s Fataz Racing Chevrolet Camaro SS is a new addition to the grid for the remainder of the season. The Queenslander, who has raced HQ Holdens, Sports Sedans and is a multiple champion of the TransAm Muscle Car Series – several competitors of which have raced with TCM in recent years.

“We’re really excited to be stepping up as a team to the Touring Car Masters series and getting to race at the biggest motorsport events in the country,” said Woodward. “It’s a new challenge for the Fataz Racing team, the field in the Touring Car Masters is a real step up in competition but we’re looking forward to getting the new car on track and building on that progress for the rest of the year."

A third brand-new car to debut will be the 1972 Holden Monaro GTS to be driven by Rob Burns. Built to TCM’s Pro-Sport class specifications, the four-door Holden will add further variety to the grid amidst the popular two-door, big capacity cars that are so popular in TCM competition.

Built by Gary O’Brien Racing, the team behind John Bowe’s Giant-Killing Torana, the car was recently shaken down at Winton ahead of its debut this weekend.

Cameron Mason also makes a welcome return in his Shelby Mustang, having missed the Tasmanian round after battling engine issues in Adelaide.

After also sustaining engine dramas in Adelaide, Allan Boughen’s iconic Ford Mercury Comet will likely return in Darwin, while the debut of Cameron Wilson’s Mustang has also been pushed back until later this year.

A host of Victorian competitors will also join the grid this weekend.

Noted Historic Touring Car racers Brett and Rod Hotchkin will front with their pair of Falcon GTHOs, taking to five the number of the iconic Ford products on track this weekend.

Damien Gambold will also race his Falcon XD in TCM for the first time. Though not built to full TCM specifications, the car will run at an invitational level this weekend. Gambold’s XD will be the first to run in TCM outside of the joint Central Muscle Cars event ran at Mount Panorama two years ago.

The highly anticipated debut of Marcus Zukanovic’s TCM specification car – the first of it’s kind – will likely now be at Hidden Valley as the car draws nearer to completion.

The Paynter Dixon Touring Car Masters field will be on track from Friday morning at Winton.