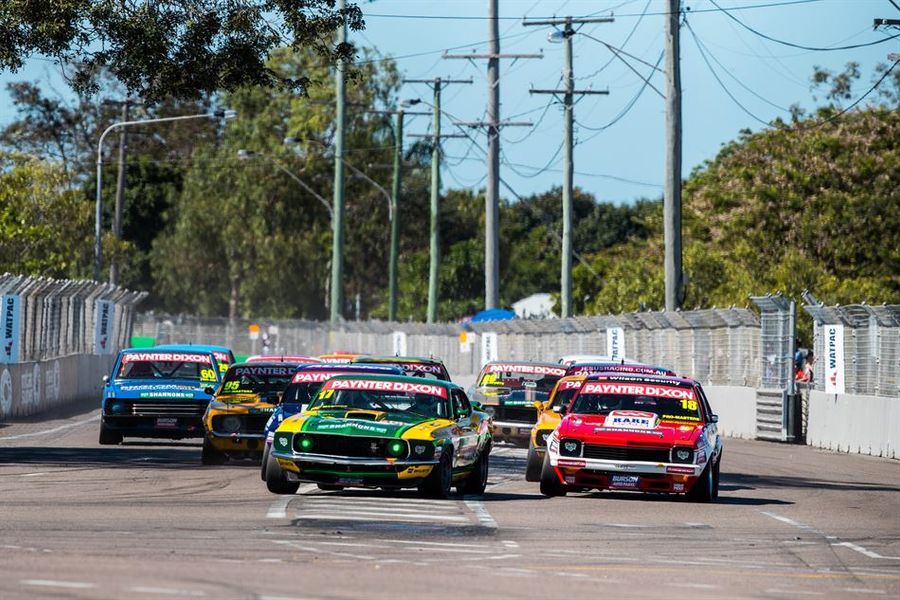 The most appropriate category for Supercars’ annual ‘Retro Round’ will bring a big and competitive grid to the Rabble.Club Sandown 500 this weekend in Melbourne. The Paynter Dixon Touring Car Masters returns reinvigorated following a mid-season break, nearly three months since their last round in Townsville. But the series doesn’t need any special, one-off retro liveries to make an impact – the mix of ‘60s and ‘70s muscle cars is an instant throwback to a classic era of the sport.

Bowe, a three-time winner of the Sandown 500, will notch up an impressive milestone this weekend when he starts his 1,100th championship race, in the Dometic Trophy Race on Saturday morning. The amazing milestone comes in a career stretching back into the 1970s and encompasses two Australian Drivers’ Championships, the 1995 Australian Touring Car Championship and two wins at Mount Panorama.

Bowe’s Touring Car Masters career has been remarkable with five championship titles, 94 race wins, 49 pole positions and 36 round victories – all records for the series.

While Bowe and Johnson take a lions-share of the attention, the fight for third place has increased in intensity in recent rounds.

Tilley will make the debut of V8-power beneath the bonnet of his iconic Valliant Pacer this weekend in an effort to chase the high-horsepower cars on the grid at the power-friendly Sandown layout. Ninety points behind Tilley sits Mark King, who has enjoyed a strong season in his Whiteline Racing / King Springs Chevrolet Camaro.

Tilley also heads the ProAm standings, though will need to keep one eye looking over his shoulder at nearest class rival, Ryan Hansford. The Queenslander finally broke through for a maiden Touring Car Masters race victory in Townsville after nearly two years of trying.

Just one solitary point separates ProSport contenders Jim Pollicina and Leo Tobin in a battle that closely matches the outright fight at the front of the field, where Torana also leads Mustang in the points race. Tobin started the year strongly however a zero-score in Townsville saw Pollicina claw back all of the points he lost in the early part of the season, virtually locking them together heading into this weekend.

Sandown will welcome back several key names and faces this weekend. Rusty French (1970 Ford Mustang), Paul Freestone (1969 Chevrolet Camaro), Brett Curran (1967 Ford Mustang), Blu Cannon (1971 Ford Falcon) and the father-son duo of Brad and Jamie Tilley (1964 Ford Mustang) will all return for their first starts in some time. Tilley Snr, in particular, will be one to watch with his famous ’71 GTHO Falcon renowned for it’s grunt. The green machine won a race and finished third overall in the 2012 Sandown round and will aim to be a contender again this weekend.

Three drivers are set to make their respective TCM debuts at Sandown. Noted racer and team owner Dean Lillie will join Jim Pollicina as part of a two-car Ravage Raceworks-run team, jumping aboard the race winning 1972 Holden HQ Monaro GTS 350 Pollicina acquired last year. The car was a winner and podium contender in the hands of Les Walmsley in 2013.

As well as the debut of former V8 Ute and Commodore Cup champion Marcus Zukanovic and his brand-new XD Falcon, a second XD will also compete for the first time this weekend. Victorian racer Darren Gambold will race for the first time in a car originally built for state-level racing, but gradually evolved towards TCM regulations.

The sixth round of the Paynter Dixon Touring Car Masters series will see the category return to the regular four-race format, including the return of the Dometic Trophy Race as part of a busy weekend.

Practice and qualifying will be held on Friday, 14th September while a busy Saturday will see three races contested.

The Dometic Trophy Race kicks off proceedings in the morning, to be followed by races 16 & 17 of the championship later in the day.

Sunday will see the 18th championship race of the year contested as a precursor to the Rabble.club Sandown 500.