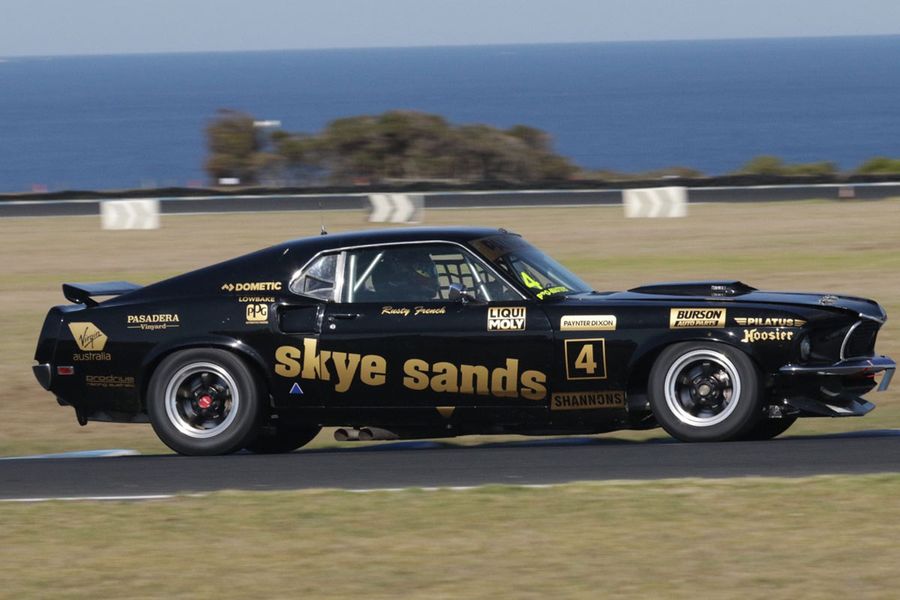 In his first race in the Paynter Dixon Touring Car Masters, Thomas Randle has put in a stunning drive from 21st at the start, to win the Dometic Trophy event at Phillip Island today. Randle only recently received the call-up to drive the Rusty French-owned 1969 Ford Mustang and took the opportunity with aplomb.

“Getting through the traffic wasn’t too bad, they were letting me go past. It was just when I was up near the front later in the race where I had to explore some other lines to get by,” he gleamed. “I did hit the back of one car but really I was just a little late on the brakes and he was all good about it afterwards.”

The race, a novel addition to the series, features a reverse of the top ten from qualifying that are then put to the back for the start, and only counts for starting and finishing points.

Second place went to Adam Bressington in the Whiteline Racing ’69 Chev Camaro. He had to battle hard to get past initial race leader Tony Karanfilovski (Mustang) before having a great stoush with Jeremy Gray for several laps. Gray had a successful debut in his Ford Capri Perana, taking the front running off Karanfilovski and leading for several laps.

Karanfilovski finished the race fourth, fending off Bruce Williams in his Holden Torana SL/R 5000, Jim Pollicina (Torana A9X), Rob Hackwood (Pontiac Trans Am) and Cameron Mason (’65 Mustang) who were all in close company.

Paul Freestone (Camaro) challenged for the lead off the start but he ran off at the fast turn one sweeper. He recovered to finish ninth ahead of Geoff Emery in the second of the Pollicina A9Xs.

Series leader after his three race wins at the first round, Steve Johnson (Mustang) came across the line in eleventh ahead of the most prolific winner in TCM, John Bowe (A9X). Then followed Cameron Tilley in the crowd-pleasing Valiant Pacer, Guy Gibbons (Holden Monaro), debutant Peter Burnitt (A9X) and Whiteline team owner Bob Middleton in the ’70 Camaro.

Ryal Harris (Camaro) was at the pointy end of the field early on, but dramatic steering issues caused a ball joint failure and one destroyed tyre. He failed to finish as did Marcus Zukanovic whose XD Ford Falcon lost its coolant.

Also, on the retirement list was Al Boughen in the popular Mercury Comet after it fried its front tyres and Ryan Hansford called it quits late in the race, flooded with a fuel mixture issue. Not starting were Andrew Fisher (Falcon XY) with an engine seal leakage, and Gary O’Brien whose HQ Holden was undergoing a gearbox change.

Earlier in the day, Pro Masters’ Johnson was fastest in qualifying – for the fifteenth time – and will start tomorrow’s first race from pole position. Randle was fractionally slower and will occupy the outside of the front row.

Pollicina who took out Pro Sports in 2018, was the best of the Pro Am drivers and third fasters overall ahead of Hansford, Hackwood, Zukanovic, Bressington, Bowe, Harris and Emery. Eleventh placed Gray topped the Pro Sports entrants.