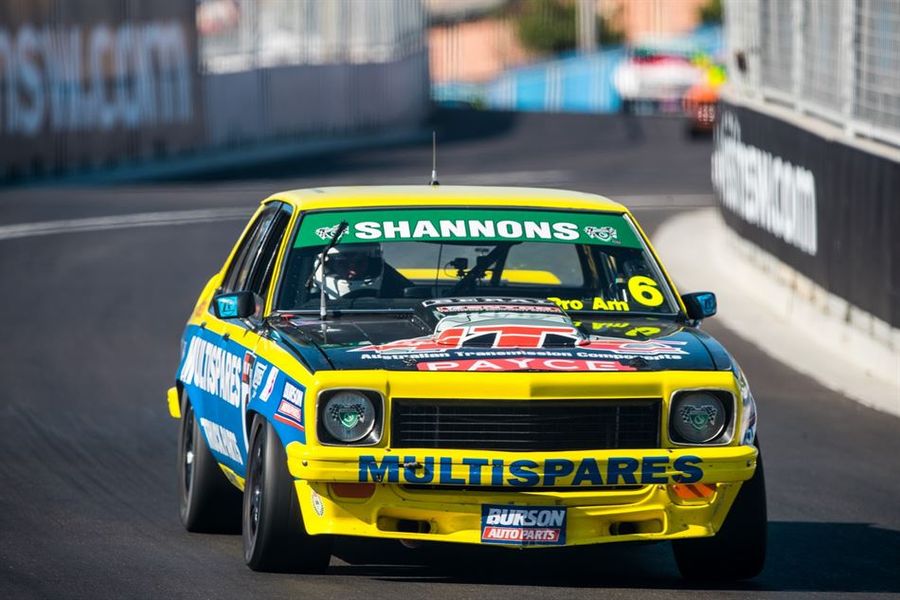 Ryan Hansford charged to his first ever Touring Car Masters pole position, edging out Adam Bressington for the top spot by less than one-tenth of a second this morning in Newcastle. Hansford sits fourth in the TCM standings and remains in mathematical calculations for the championship, but will need to win both races - coupled with the three drivers in front striking dramas – should he hope to win the title.
As a result, pole position was the best possible result for the Queenslander and his Multispares Racing Holden Torana. All four outright title contenders qualified in the top four today and were split by just 0.3 seconds, setting up a potentially enthralling pair of 12-lap races tomorrow.
The margin over Bressington was the third time that pole had been decided by less than 0.1 seconds this season alone. Bressington held pole in the early stages of the session, however rued a difficult run through slower traffic that cost him valuable tenths and possible pole position.
The result, however, was positive for the Whiteline Racing Camaro driver given he out qualified both John Bowe and Steven Johnson today. Bowe was third, 0.08s from pole and 0.15s in front of Johnson who was fourth. The Wilson Security / PAYCE Torana broke a crown wheel and pinion in the earlier practice session and had to revert to an unfavourable differential ratio as a replacement for qualifying.
Johnson was fourth, however, would ultimately end the qualifying session early when his Mustang failed to re-fire after he spun at turn nine late in the session. Johnson sits five points behind Bowe and only 20 in front of Bressington heading into tomorrow’s two championship races.
His car was one of two stranded on the circuit in the remaining few minutes of the session, Blu Cannon also stranded and unable to start his car at turn one.
Bruce Williams put his ACDelco Torana into a season-best fifth place, having run comfortably in the top-10 throughout practice. Local hero Cameron Mason was an outstanding sixth, just 1.6 seconds from pole position and in front of some serious firepower.
Based just 20 minutes from the Newcastle circuit, the family-run Mason team had their best qualifying performance of the season today and will start race one from the outside of the third row tomorrow.
Jason Gomersall and Cameron Tilley will share the fourth row of the grid, with Brad Tilley and Tony Karanfilovski rounding out the top-10. Mark King qualified 11th, while double TCM Champion Gavin Bullas could only manage 12th in the shortened session.
Jamie Tilley qualified a lucky thirteenth on his debut in the category, with Jim Richards fourth. Wayne Mercer, Geoff Fane – rebounding from damage in the earlier practice session – Jim Pollicina, Michael Cannon, Rusty French, Leo Tobin, Darren Beale and Bob Wilsely completed the field.
Andrew Fisher’s horrible run of luck continued, with the Jesus Racing Falcon GTHO breaking an oil pump bracket in practice and ruling the team out for the remainder of the weekend. Fisher had impressed throughout practice with the car showing real pace potential to run at the pointy-end of the field. The John's Furniture Removals Racing Comet also missed qualifying with a rocker issue in the engine, though the team is looking to return to the circuit tomorrow for race one.
Two races tomorrow will complete an enthralling Touring Car Masters season with the first commencing at 9:00am and the second at 1:35pm.
QUALIFYING - ROUND 7
1  Ryan Hansford (Holden Torana SL R) 1m:17.8428s
2  Adam Bressington (Chevrolet Camaro SS) 1m17.9188s
3  John Bowe (Holden Torana SL R) 1m17.9302s
4  Steve Johnson (Ford Mustang Fastback) 1m18.1198s
5  Bruce Williams (Holden Torana SL R) 1m18.9577s
6  Cameron Mason (Ford Mustang Fastback) 1m19.4490s
7  Jason Gomersall (Holden Torana A X) 1m19.6006s
8  Cameron Tilley (Valiant Pacer) 1m19.6013s
9  Brad Tilley (Ford Falcon XY GT) 1m19.9304s
10  Tony Karanfilovski (Ford Mustang Trans Am) 1m20.1379s