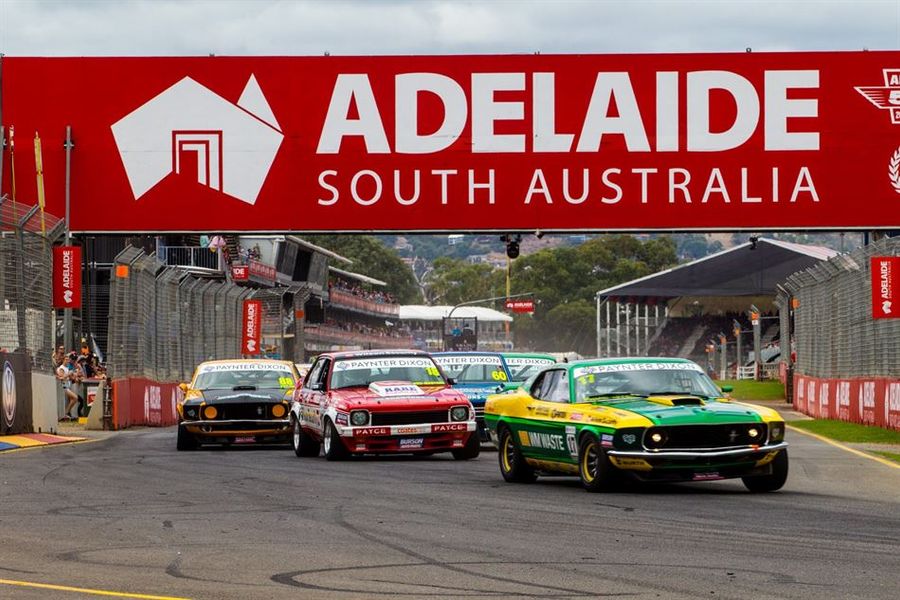 Steven Johnson looked set to open his Paynter Dixon Touring Car Masters title defence with a round victory – right before the wheels quite literally fell off his quest for a win at the Adelaide 500. Johnson’s Ford Mustang was leading John Bowe in the closing stages of the third points-paying race on the streets of Adelaide on Sunday afternoon, having broken the lap record as he pulled out an early lead.

However, as his Mustang bounced over the exit kerb at turn six, his left-rear wheel departed as the studs retaining it broke with just four laps to go. It caused the Mustang to bounce into the wall and out of the race, bringing out the Safety Car and handing the race lead and, ultimately, a race and round victory to John Bowe and his Wilson Security / PAYCE Holden Torana.

He won the third of 24 races that make up the 2018 series ahead of Gavin Bullas – who charged from the back of the top-10 – and Cameron Tilley, who starred in his Anglomoil Valliant Pacer. Bowe’s victory saw him claim the overall and ProMaster round win in Adelaide, with Johnson second in class and Gavin Bullas third.

Bowe also leads the overall standings in front of Cameron Tilley and Brad Tilley after the first of eight rounds.

The Adelaide 500 weekend provided plenty of thrills and spills that started when Adam Bressington won a dramatic Dometic Trophy race on Thursday afternoon. In a twist of fate from his final race of the 2017 season, the Whiteline Racing Camaro driver was handed the victory after Paul Freestone – who crossed the line first – was penalised for kerb-hopping during the race.

In Newcastle late last year Bressington lost his maiden victory after controversially incurring a time penalty for a Safety Car restart infringement. It was his first ever TCM race victory and the first in more than two seasons for the Adelaide-based team.

Johnson then led from lights-to-flag to take the first points race of the year, starting from pole and pulling away from Bowe to kick off his title defence in style.

Former champion Gavin Bullas had contended early and was looking a likely podium finisher before he ran wide at turn 12 and whacked the wall; breaking his steering and dropping him to 16th.

The podium result was the same finishing order in the outright championship in 2017.

Saturday saw the second race and what will surely be thought of as an all-time classic between Johnson and Bowe; the pair swapping the lead three times before Bowe ultimately edged away in the final laps to level the score. Behind them an enormous fight was unfolding for third place as Karanfilovski held on ahead of a seven-car battle pack to grab his first podium since early in the 2016 season.

With the round on the line, Johnson leaped to an early lead in Sunday’s final race and set about chasing the lap record early-on, before then consolidating his margin to the chasing Bowe. He got the lap record and had even controlled his leading margin before the left-rear wheel studs departed, handing Bowe his 92nd TCM victory and fifth Adelaide round win.

The Paynter Dixon Touring Car Masters series now decamps to the Apple Isle and the first round at Symmons Plains Raceway since 2015, on 6th-8th April.