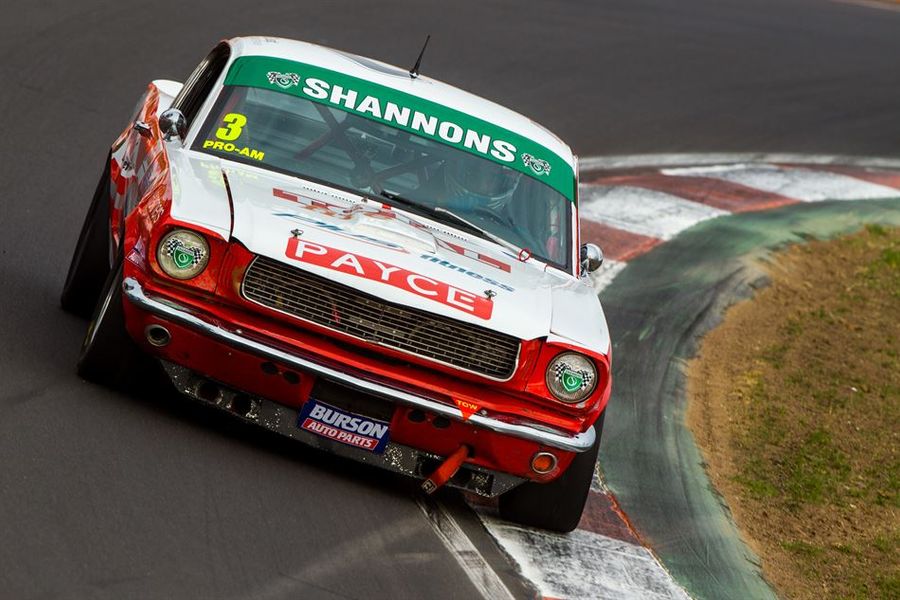 Local hero Cameron Mason is hoping to steal some of the limelight amidst the closest Touring Car Masters title fight in series history, when the grand finale’ is contested this weekend in Newcastle. The Hunter local will be targeting a Touring Car Masters win at the Coates Hire Newcastle 500 in front of his home town friends, family and supporters – while Australian motorsport hero John Bowe and Steven Johnson battle for the overall title in the series’ closest ever showdown.
Bowe leads Johnson by just five points heading into the two final races of the year in a battle of classic Ford and Holden Muscle Cars. For Mason, however, this weekend will be the realisation of a once unlikely dream to race in his home town.
“It’s hard to believe it’s a reality,” said Mason, who like his TCM championship-winning father Steve has spent his life in the Hunter region.  “It was such an ambitious undertaking and it seems the organisers have executed perfectly. The track and the surface look great and I think the TCM cars will be a highlight of the weekend – the local fans really get behind our form of racing so we’re going to put on a great show.”
Mason has enjoyed support from a host of locally based businesses, with his 1966 Ford Mustang fastback on show at the local Lucky’s Hotel this week ahead of the event commencing.  Even Newcastle-based Plus Fitness – who have supported Newcastle’s Supercars driver Aaron Russell for several seasons – jumped on board to support the team.
“The buzz around town for the event is huge – it really feels like it has the potential to be one of the major event stops of the year. It’s going to be quite an iconic circuit and things like the view from Fort Scratchly, the Monaco-style big boat mooring in the harbour and the concerts!”
Mason has spent plenty of time walking and driving the circuit during its construction and says it is likely to provide plenty of excitement.
“For the drivers it’s going to be a challenging track to get right,” he explained. “There’s a lot of off-camber, downhill corners while braking and lots of wild pieces of race track with little to no forgiveness, it’s going to be a huge challenge. It will be a massive weekend and I can’t wait to get on track Friday and see how it goes.”
To score a victory on his home circuit, Mason will have to bypass a remarkable championship battle for the overall Touring Car Masters championship title that will surely go down to the final race.
Four drivers remain in mathematical championship calculation, 93 points covering leader John Bowe, Steven Johnson, Adam Bressington and Ryan Hansford with 120 up for grabs in the two races. However, just five split Bowe and Johnson at the front of the field essentially making it a winner-take-all finale between the pair.
Each has won five times this year, with Johnson winning two races en route to the round victory at Mount Panorama, Bathurst, last time the series raced. The TCM title fight mirrors the Supercars championship battle, with a multiple champion driving a Holden taking on a Ford driver yet to win the championship in a winner-take-all finale’.
Whiteline Racing’s Adam Bressington sits third overall and only 25 markers from the leader, meaning he can also be considered a real contender. The Camaro is yet to win a race this season, however the last round at Bathurst was the best of the year for the Whiteline Racing entry, qualifying on the front row alongside Johnson – and in front of Bowe – and scoring the third-most points of the weekend.
In mathematical contention is Queenslander Ryan Hansford, who sits 93 points from the lead in fourth place. The Peters Motorsport Multispares Torana has evolved into a regular contender at the front of the field in the second half of the season and is likely to be in a strong position to capitalise on points should any misfortune strike the key contenders in the championship.
The strong Newcastle field includes two drivers on debut – with one of them sporting a well-known Touring Car Masters surname. Jamie Tilley is the son of Brad Tilley and will join his father and uncle, Cameron Tilley, on the grid for the first time this week driving a 1964 Ford Mustang Coupe.
The trio hail from Sydney’s Northern suburbs so will likely consider the Newcastle Event a home track this weekend.
Also joining the grid for the first time will be highly regarded racer, Jim Pollicina. The Sydney-based V8 Touring Car series frontrunner has purchased the ex-Keith Kassulke HQ Monaro GTS 350 and will make his debut in the series this weekend.
Pollicina is fresh off the back of a strong fifth-place finish in this year’s Kumho V8 Touring Car series, where he races an ex-Tasman Motorsport Holden VE Commodore.
The Touring Car Masters series will race twice at the inaugural Coates Hire Newcastle 500, with the standard Dometic Trophy Race not part of the event schedule this week. Practice 1 will be held on Friday, November 24 at 10:50am, followed by the second practice session early on Saturday – at 8:10am.
Qualifying will be critical and will be staged on Saturday at 11:55am. Both races will be held on Sunday – the first at 9:00am and the second at 11:55am.