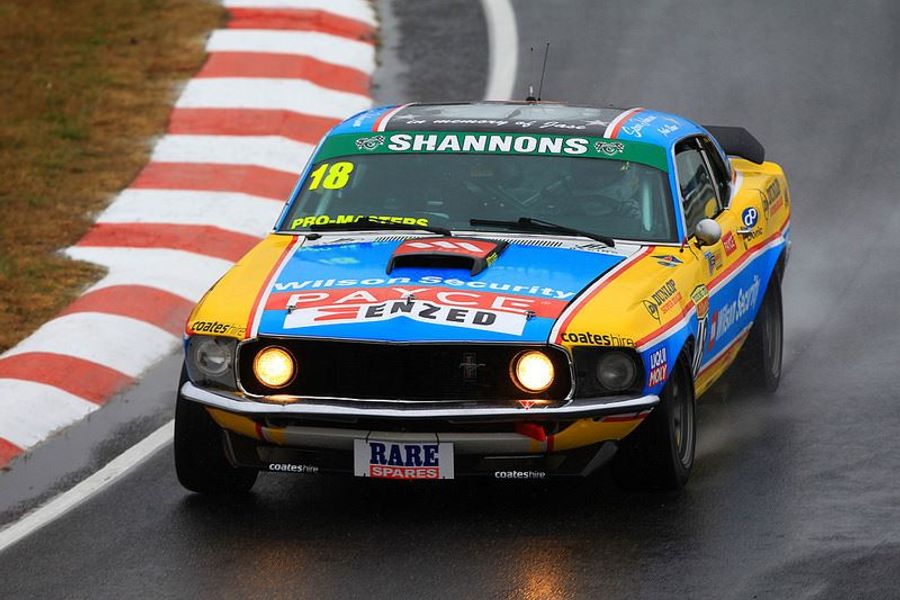 Steven Johnson made the best of damp conditions at Symmons Plains today, topping ENZED Touring Car Masters practice on his debut in the category. Assuming the controls of ‘Mustang Sally’ in John Bowe’s absence, Johnson jumped to the top of the timesheets as the track conditions improved at the end of second practice. The ex-V8 Supercar driver was clear by just under eight tenths of a second around the 2.4 kilometer course.

Johnson saved his best lap until last as he used his final flyer to top the times on a drying circuit after a morning of persistent rain. Johnson’s 1m03.31s lap was a full five seconds slower than the TCM Symmons Plains lap record, showing the amount of water on the circuit this morning.

Hard-charging local, Greg Crick, was the fastest of the four Tasmanians in the field his weekend having set a 1m04s flat in his final effort in practice two. The Mopar Performance Charger was scored in second overall. Rounding out the top three was Tony Karanfilovski in his Trans Am Mustang – just over a second shy of Johnson’s benchmark.

Championship-leader, Andrew Miedecke, ended up fourth in the afternoon session after electing to skip the tricky track conditions in opening practice. Cameron Tilley was fifth quickest overall in his Glennan’s Transport Valiant Pacer having also occupied a position inside the top-10 during the morning’s wet opening practice.

Bill Pye punched in 23 laps over both sessions in his Camaro, knocking on the door of a top five position with a 1m06.8s in practice two – over six seconds quicker than his personal best in the damp morning session. Practice one pace-setter, Eddie Abelnica, was not seen during the later session, however his practice one benchmark of 1m07.24s was good for seventh place overall.

After a race to get the Jesus Racing Falcon ready for trek south, Andrew Fisher clocked in eighth overall after a 1m07.6s on his 11th and final lap of the day. Gavin Bullas mastered the art of opposite lock in his Provide Racing Australia-built Ford Mustang, the Victorian skating his way to the ninth fastest time overall; just over four seconds shy Johnson’s pace-setting effort.

Jason Gomersall was the best of the Holdens in Friday practice, ending up tenth in his iSeek Racing Torana having also failed to record a lap in opening practice due to the wet conditions. Don Dimitriadis successfully shook down Glenn Seton’s Thunder Road Racing Mustang Coupe after completing 20 laps across the two sessions. Glenn is set to arrive in Tasmania later tonight and will be back behind the wheel for qualifying tomorrow morning. The two-time ATCC champion was in Melbourne today helping 16-year-old son Aaron come to grips with a Porsche GT3 car ahead of his debut in the GT3 Cup Challenge at this weekend’s Shannons Nationals round.

Jim Richards failed to record a timed lap in either session but is expected to feature in his AMC Javelin in qualifying and both races tomorrow, despite not having raced at Symmons Plains since the late 1990s. The Shannons Tasmania Tourist Trophy continues tomorrow with qualifying scheduled for 9.30am local time ahead of two races later in the day.

The weekend will be completed with race three on Sunday morning followed by a non-championship race Sunday evening following the completion of the V8 Supercars Tyrepower Tasmania Challenge this weekend.