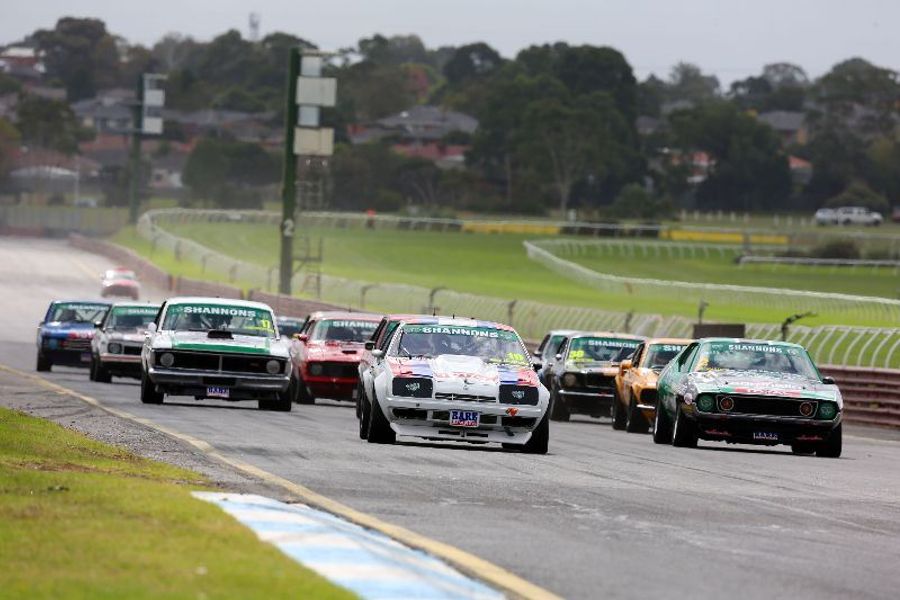 The retro feel will be strong with the Touring Car Masters when the series heads to Sandown this weekend for the fifth round of the 2017 series. As well as bringing a nearly full grid of classic muscle and sports cars from the 1960s and 1970s to one of Australia’s most historic circuits, TCM will also welcome back one of the best to ever race at Sandown – Jim Richards.
The two-time TCM champion missed the most recent round of the series due to a commitment racing at the iconic Silverstone classic event in the UK, his Group C JPS BMW 635i wowing the crowds and winning the ‘most admired car of the meeting’ award. Richards has an imposing record at Sandown in any category, with his two wins in the Sandown 500 coming in 1985 with BMW and 1989 in a Nissan Skyline.
He also won the 1991 Australian Touring Car Championship round at the venue, as well as races in Carrera Cup, Nations Cup and more.  His form in TCM at the venue has been even more impressive: taking four round victories, winning nine races and scoring 20 top three race finishes at the venue – from 25 race starts.
His last TCM race win came at the venue in April last year.
The Touring Car Masters field will fully embrace the Supercars ‘retro round’ concept this weekend with drivers and cars alike. As well as greats of the sport like Richards, John Bowe and Rusty French behind the wheel, several cars run period appropriate liveries.
Jason Gomersall’s BigMate Racing Torana A9X (Peter Brock / HDT) and Bob Wisely’s similar four-door SL/R 5000 (Bob Morris) are both presented in period liveries, while much of the field runs traditional ‘old school’ style paint as a nod to the heritage of the category.
The Touring Car Masters grid heads to Sandown amid the championship’s most competitive ever title fight, with Adam Bressington and John Bowe tied at the top of the overall standings following the last round at Queensland Raceway.
While Bowe’s Wilson Security / PAYCE Holden Torana SL/R 5000 has done plenty of winning this year, Bressington’s Fabre / Whiteline Racing Camaro has been the king of consistency and has notched up points finishes in most of the races.
While each lead their respective classes (Bowe in ProMaster and Bressington in ProAm), both are also locked together on 529 points heading into the weekend. However, the pair are not the only title contenders with an upturn of form from Steven Johnson seeing the Ford Mustang driver now only 17 points behind the tied duo.
Johnson was a race winner at Queensland Raceway and only trailed Bowe in the round results as he heads to what should be a strong venue for his WM Waste Management / Team Johnson Ford Mustang.
Ryan Hansford sits fourth in the championship and will be buoyed by his strongest ever weekend in Touring Car Masters last time out. Hansford won the ProAm class last time out and narrowly finished second behind Eddie Abelnica in a breathtaking final race, that saw the pair battling side-by-side in the closing stages.
The strong Sandown field welcomes back several familiar faces and classic machinery this weekend. Sydneysider Terry Lawlor returns to the series for the first time since the Clipsal 500 Adelaide following a lengthy rebuild of his Lady Luck Racing 1964 Ford Mustang coupe.
The ex-Glenn Seton car was badly damaged in Adelaide at the start of the season and has just been completely rebuilt and restored by Lawlor’s team and Brad Tilley Racing.
Melinda Price will also return following her TCM debut at Winton earlier this year. Price – who made her Supercars endurance debut at the Sandown 500 in 1997 – will celebrate her 20th anniversary of that milestone weekend behind the wheel of the myPlates XA Ford Falcon.
TCM race winner Wayne Mercer will be back in his Lindways Builders GTHO, while Queenslander Geoff Fane will make the trek down from the Sunshine state with his Camaro SS.
The TCM field will take to the track for a busy program on Friday, with practice set for 10:30am local time to be quickly followed by Qualifying at 1:00pm. The Dometic TCM Trophy race will commence proceedings at 3:35pm over 10 laps.
Race two will be held at 11:30 am on Saturday prior to the finale’ at 10:20 on Sunday morning.
TCM fans are encouraged to attend the Wilson Security Sandown 500 with the series’ to be housed in a stand-alone pit complex this weekend that will be accessible to all General Admission ticketholders attending the event. Located at the turn one end of the main grandstand, the TCM paddock will be open to all with access to the cars and stars of the series.