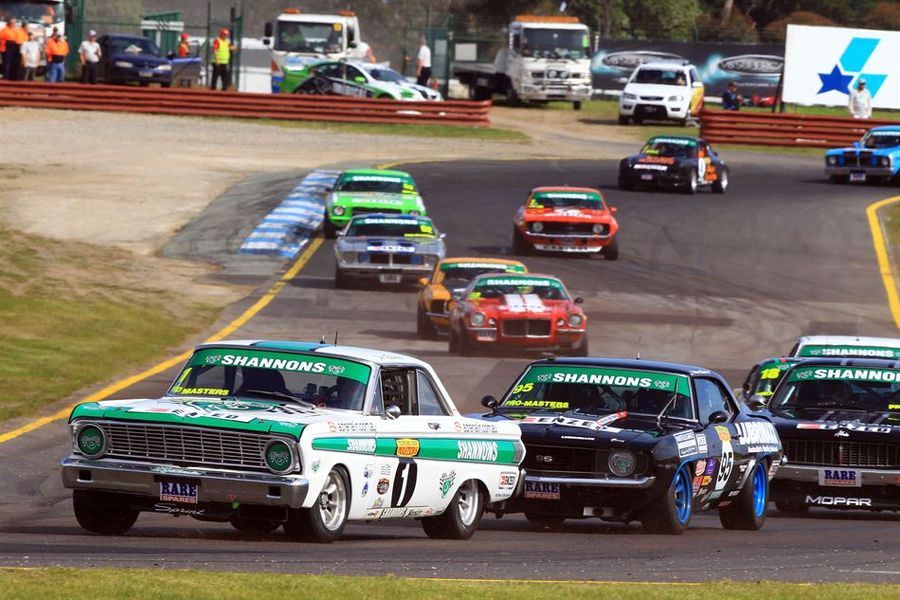 He may have won the opening round of the 2016 Touring Car Masters at the Clipsal 500 Adelaide – but to win again this weekend at Sandown Greg Ritter will have to first get past the TCM king of Sandown. Ritter, the 2004 Sandown 500 winner, stormed to victory in Adelaide and the suburban Melbourne venue is again expected to suit the strengths of his Chevrolet Monza - however it’s Jim Richards who enters the second round of the year (the Shannons TCM Festival) as an early favourite.
A two-time winner (1985 and 1989) of the 500km classic, Richards has made Sandown’s 3.2km his own in Touring Car Masters competition having won a record eight of the 24 races held at the venue since 2007. More impressively, he’s finished on the podium on 19 occasions there and also has 3 pole positions to his credit – more even than TCM’s acknowledged qualifying master, John Bowe.
Richards’ scored pole at Sandown in 2009 and 2010 driving his famous Falcon Sprint before rolling out the Javelin for the top spot in 2012. Despite retiring his Shannons Insurance AMC Javelin from the second race in Adelaide, Richards’ started this year’s title race in red hot form: Qualifying fourth before finishing in the same position in the opening race.
With TCM having missed racing at the popular venue in 2015, this weekend will mark John Bowe’s first visit to Sandown in the Wilson Security / PAYCE Holden Torana however that’s not expected to slow him down.
Bowe holds both the race and qualifying lap records at the track while Torana’s have finished on the podium there before – as recently as 2014 when Jason Gomersall grabbed a third place in his iSeek Racing machine.
Third in the ProMaster class points standings, Eddie Abelnica is also another likely contender for round honours this weekend. The Melbourne’s Cheapest Cars driver was in sublime touch in Adelaide – pressuring Ritter all the way to the line in the second race of the weekend to grab second place. V8 Utes racer Kim Jane drove Abelnica’s XB Coupe’ at Sandown when the series last visited in 2014 and twice finished on the podium, proving the cars pace at the circuit.
Dubbed ‘The home of horsepower’, Sandown’s long straights are expected to favour the cars with big grunt meaning Jesus Racing’s Andrew Fisher and Steven Johnson – back in the Synergy Race Engines Ford this weekend - will enter the round looking for a strong result in their respective Falcon GTHOs.
Johnson’s first run in the Falcon at the Clipsal 500 was solid – he qualified seventh and twice finished sixth in the races – while Fisher finished second overall in the ProAm division in a strong start to his season. The big aussie-built Fords tasted success at Sandown as recently as 2012, with Brad Tilley behind the wheel.
Fresh from his win in the WAECO Trophy Race in Adelaide, Tassie teenager Adam Garwood will be looking to build on his first TCM race victory, while Glenn Seton’s Thunder Road Racing Ford Mustang was on pole in Adelaide before finishing third in race one.
This year’s TCM grid is amongst the closest ever and could provide some interesting results at Sandown this weekend – a circuit predictable for being almost entirely unpredictable for the class. With plenty of overtaking opportunities, the circuit has thrown up a multitude of different winners in the past.
There’s only been one round ‘clean sweep’ at the venue, when Andrew Miedecke powered his Chevrolet Camaro to all three race wins in a dominant weekend in 2013. On two occasions (Jim Richards in 2007 and John Bowe in 2011) has one driver won two of the three while on the remaining five occasions, three different drivers have shared the three race wins.
The 20-strong field includes nine local drivers, fan favourites like Cameron Tilley (Valliant Pacer), the return of Greg Garwood’s Ford Capri Perana and the TCM debut of Queenslander Allen Boughen and his Ford Mercury Comet.
Class Leaders after opening round:
PRO MASTER
1. Greg Ritter 170
2. John Bowe 158
3. Eddie Abelnica 151
PRO AM
1. Paul Freestone 128
2. Jason Gomersall 110
3. Andrew Fisher 95
PRO SPORTS
1. Adam Garwood 104
2. Nigel Benson 95
3. Greg Garwood 89
Clipsal 500 Adelaide 2016 Touring Car Masters Sandown Greg Ritter