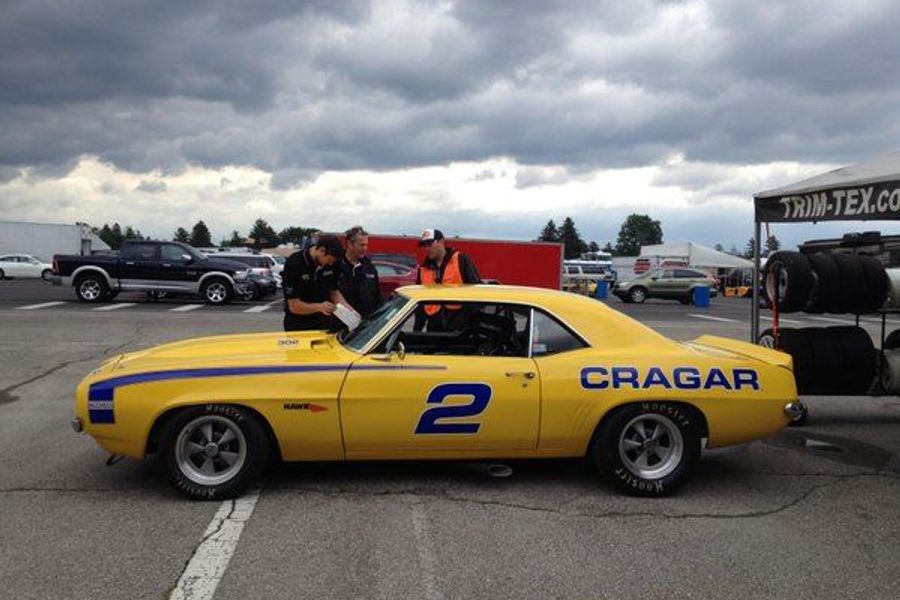 Photo: The '69 Camaro Z/28 Raced by Alex Lloyd in 2015
The Sportscar Vintage Racing Association (SVRA) yesterday revealed that with the entry of top competitors Alex Lloyd, Richie Hearn and Rick Treadway only six spots remain in its field of 33 for the June 17th Indy Legends Charity Pro-Am. That race is the Saturday feature of the Fathers’ Day Weekend Brickyard Invitational at the Indianapolis Motor Speedway.
“We have had tremendous interest among Indy 500 veterans and that is such an honour,” said SVRA President and CEO Tony Parella. “The three drivers we are announcing today have amazing stories, and I think it is cool that Ricky can come back to IMS as a competitor on the 20th anniversary of his father’s Indy 500 win as an owner back in 1997.”
Lloyd is a veteran of four Indianapolis 500s with a best finish of fourth in 2010. Among numerous other successes he was the Indy Lights champion in 2007, winning eight of 16 races. Lloyd started racing karts in Britain and Europe at age nine and became British Open champion at age 14 in 1999. His career progressed and in 2001 he was racing competitively in Formula Ford. The British Race Driver’s Club (BRDC) named Lloyd “young driver of the year” after a runner-up finish to Formula One World Champion Lewis Hamilton in the 2003 Formula Renault series. T
his led to a Formula One test with McLaren in 2004. After racing off and on in Formula 3000 Lloyd traveled to the United States where he enjoyed great success with the Indy Lights series and that led to his Indianapolis 500 rides. This will be Alex’ fourth Indy Legends “Pro-Am.” Most recently Alex competed in Pirelli World Challenge (2014) and has brought his knowledge and expertise to motorsports journalism with articles and on-line video.
Hearn, who was Toyota Atlantic champion in 1995, first appeared in the Indianapolis 500 in 1996 and finished third, the top-placed rookie in the field. He competed in six other “500’s” with a best finish of sixth in 2002, his last appearance coming in 2007. Hearn won the 1996 Las Vegas Speedway Indy car race and finished fourth in the Indy Racing League (IRL) championship point standings that year. Most recently Richie has been a lead instructor at the Ron Fellows Performance Driving School at the Spring Mountain Motorsports Ranch outside Las Vegas.
Rick Treadway raced in the Indy car series for two years, earning a top-five finish at Texas Speedway in 2001 and backing that up with a top-ten result at Phoenix the following year. He qualified for the 2002 Indianapolis 500 to make him part of an impressive rookie class that included Dario Franchitti, Tony Kanaan, Thomas Scheckter, and Max Papis. He is the son of Fred Treadway, who won the 1997 Indianapolis 500 as a car owner with two-time winning driver Arie Luyendyk.
Previously announced Indy 500 veterans entered in the Pro-Am include Al Unser and son Al Jr., as well as Jimmy Vasser, Willy T. Ribbs, Sarah Fisher, Davy Jones, Geoff Brabham, Lyn St. James, and last year’s A and B Production winners, Robby Unser and Paul Tracy. All the Indy 500 veterans will practice in a special track session on Friday, June 16. They will also be available for autographs and pictures during the pre-race fan pit walk just before their Saturday feature race.
The Pro-Am feature is a 45-minute race on the Speedway’s 2.43-mile Grand Prix road course. The cars are racing machines from the “Group 6” SVRA class. As in previous years that will include 1963 to 1972 vintage Corvettes, Camaros and Mustangs but also race officials are considering adding other Group 6 marques such as Porsche and Jaguar for variety. As in the previous three years, the professionals will be paired with amateur drivers, splitting stints at the wheel at their discretion.
In addition to the Pro-Am, there will be a festival of other activities at the Brickyard Invitational, including the Hagerty Insurance “shine and show” car corral, a “Celebration of Vintage Motorcycles” with vintage motorcycle racing and displays, and 500+ vintage racers ranging over 100 years of automotive history racing in SVRA Groups 1 through 12. An oval exhibition featuring a racecar show of judged competition for the A.J. Watson and Sir Jack Brabham trophies led by track historian Donald Davidson will also take place. Also, for the first time ever, the professional Trans Am series will compete as the Sunday afternoon feature race. Heading the pack will be series champion Amy Ruman who has won the crown the last two years.
The Brickyard Invitational will be preceded by a new SVRA event at the Speedway, the World Open Wheel Challenge. It will commemorate 50-years of Formula Ford and will welcome all forms of open wheel racecars, beginning June 8.