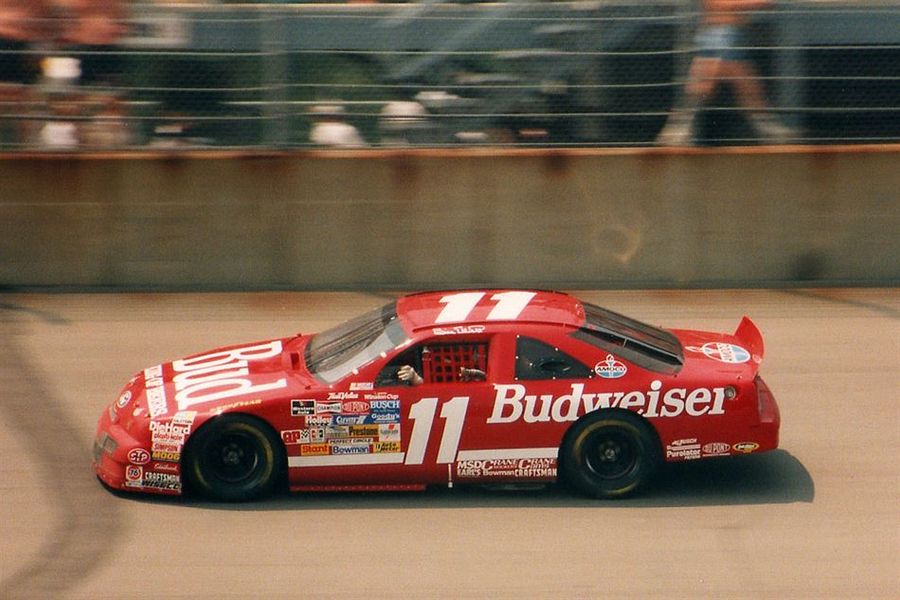 The Sportscar Vintage Racing Association (SVRA) yesterday announced that NASCAR champions Bill Elliott and Ray Evernham are once again entered as co-drivers of the special “Garage 34” entry in the Indy Legends Charity Pro-Am at the Indianapolis Motor Speedway (IMS) on June 17. The two entered the Fathers’ Day Weekend Saturday feature race for the first time last year. Elliott won the 2002 Brickyard 400 at IMS in dominating fashion in an Evernham-prepared Dodge.
“Ray Evernham has grown to become a tremendous friend and enthusiast for our brand of racing. He has raced his vintage cars in some of our other classes in the past,” said SVRA President and CEO Tony Parella. “His recent Americarna cable TV show on Velocity about the 2016 Brickyard Invitational is evidence of that. Bill Elliott won NASCAR’s popular driver award more than anyone – 16 times – so obviously the fans love him. Ray has raced with us before.”
In last year’s Pro-Am Elliott was able to practice but their car sheared its drive shaft before he could get behind the wheel during the race. This year he and Evernham plan to share the 1970 SVRA-certified Mustang of Elliott’s long-time colleague and mechanic, Carlus Gann. Gann owns Vintage Race Car Restorations in Lafayette, Georgia and prepared the Mustang with Jim Barfield, who worked with Elliot for 16 years.
Elliott, the 1988 NASCAR Cup champion, is one of the most accomplished drivers in American auto racing. He scored 44 race wins at NASCAR’s highest level including the 1985 and 1987 Daytona 500s. While he was previously well established as a top driver on the NASCAR scene, it was in 1985 when he won the “Winston Million” for victories in three of the series’ marquee races: the Daytona 500, the Southern 500 and the Winston 500 that he broke through to superstar status. His million-dollar bonus for the achievement earned him the nickname, 'Million Dollar Bill', alongside his other label of 'Awesome Bill form Dawsonville'. Elliott has been inducted into both the Motorsports Hall of Fame of America and the NASCAR Hall of Fame. Bill’s son Chase is currently a NASCAR Monster Energy Cup series driver for arguably the most powerful team in the sport, Hendrick Motorsports.
Ray Evernham is best known for his work with NASCAR champion Jeff Gordon and the “Rainbow Warriors” of Hendrick Motorsports. Together they formed one of the most dominant teams in NASCAR history, winning 47 Cup races and three championships in 1995, 1997 and 1998. Among those victories were two Brickyard 400s as well as two Daytona 500s. Evernham came into notice among the ranks of big-time auto racing when in 1983 he signed on as a chassis specialist preparing cars for the IROC series. Champion drivers gave him high marks for translating their input.
Evernham formed his own team after parting ways with Gordon and Hendrick in 1999. Among his top drivers was Elliott who closed his full-time driving career with the team after winning several races. Since moving away from active team management Evernham has maintained a consulting role with Hendrick and served as an analyst for racing television coverage. He currently hosts his own show for the Velocity channel, “AmeriCarna.” The show is a car culture series focusing on the discovery and restoration of unique automobiles and especially racecars.
The Pro-Am feature is a 45-minute race on the Speedway’s 2.43-mile Grand Prix road course. Among the top drivers who have filed entries include four-time Indy 500 champion Al Unser and his son, Al Jr., who won the “500” twice. Others include defending Indy Legends Pro-Am champions Robby Unser (A Production) and Paul Tracy (B Production) as well as Jimmy Vasser, Willy T. Ribbs, Johnny Unser, A.J. Foyt IV, Sarah Fisher, Davey Hamilton, Davy Jones, Geoff Brabham, Roberto Guerrero and Lyn St. James.
The cars are racing machines from the “Group 6” SVRA class. As in previous years that will include 1963 to 1972 vintage Corvettes, Camaros and Mustangs but also race officials are considering adding other Group 6 marques such as Porsche and Jaguar for variety. As in the previous three years, the professionals will be paired with amateur drivers, splitting stints at the wheel at their discretion.
In addition to the Pro-Am, there will be a festival of other activities including the Hagerty Insurance “shine and show” car corral, a motorcycle homage with vintage motorcycle racing and displays, and 500+ vintage racers ranging over 100 years of automotive history racing in SVRA Groups 1 through 12. An oval exhibition featuring a racecar show of judged competition for the A.J. Watson and Sir Jack Brabham trophies led by track historian Donald Davidson will also take place. Also, for the first time ever, the professional Trans Am series will compete as the Sunday afternoon feature race. Heading the pack will be series champion Amy Ruman who has won the crown the last two years.

Sticker of the Day No.5: Indy 500 Interscope Porsche