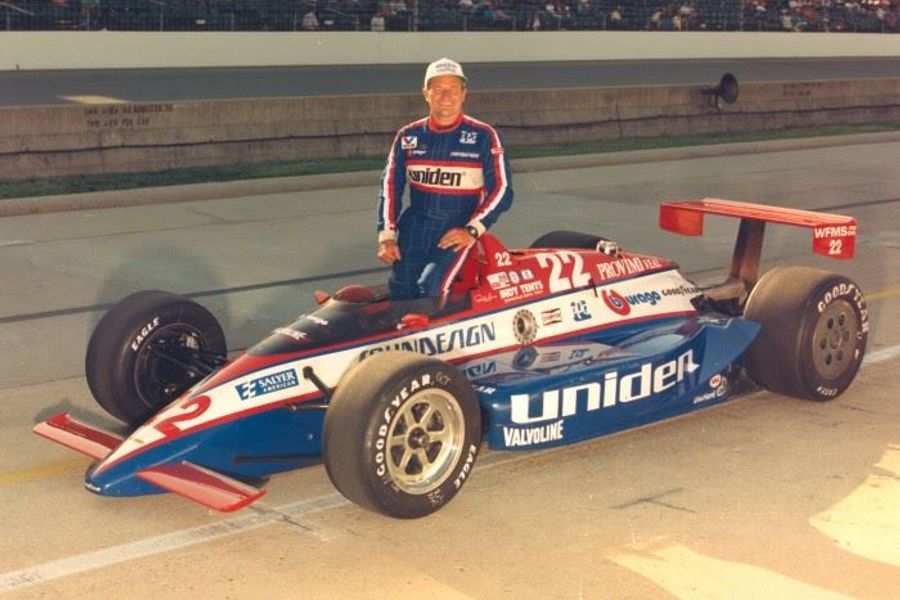 Picture: Dick Simon at Indianapolis 1987.
The Sportscar Vintage Racing Association (SVRA) this week announced two of the Indy 500’s all-time fan favourite drivers, Dick Simon and Johnny Parsons Jr., are returning for the fourth running of the Fathers’ Day Weekend Indy Legends Pro-Am at the Indianapolis Motor Speedway. The two are the latest additions to a talented field for the Brickyard Invitational’s Saturday, June 17th, feature race.
“In my conversations with fans through forums like Don Kay’s Internet radio show, the names Dick Simon and Johnny Parsons, Jr. keep coming up,” said SVRA President and CEO Tony Parella. “Not only could these guys stand on it, but people can see their big hearts. Their sincerity and ability to communicate fostered warm connections throughout the paddock and extended into the grandstands.”
Like all the famous champion drivers of the Indy 500 who will be on hand at the Brickyard Invitational, Simon and Parsons will practice in a special track session on Friday, June 16th. They will also be available for autographs and pictures during the pre-race fan pit walk just before their Saturday feature race.
The Pro-Am feature Parsons and Simon will compete in is a 45-minute race on the Speedway’s 2.43-mile Grand Prix road course. The cars are racing machines from the “Group 6” SVRA class. As in previous years that will include 1963 to 1972 vintage Corvettes, Camaros and Mustangs but also race officials are considering adding other Group 6 marques such as Porsche and Jaguar for variety.
As in the previous three years, the professionals will be paired with amateur drivers, splitting stints at the wheel at their discretion. Among the top drivers who have filed entries are four-time Indy 500 champion Al Unser and his son, Al Jr., who won the “500” twice. Defending Indy Legends Pro-Am champions Robby Unser (A Production) and Paul Tracy (B Production) are also entered, as well as Willy T. Ribbs, Johnny Unser, Sarah Fisher, Lyn St. James, Ana Beatriz, and Jimmy Vasser.
Parsons, the son of 1950 Indianapolis 500 champion Johnnie Parsons, earned great success in his own right with 12 Indianapolis 500 starts and best finishes of fifth in 1977 and 1985. He is a highly decorated sprint and midget driver and was voted into the National Midget Auto Racing Hall of Fame in 1994. This will be his fourth consecutive appearance in the Brickyard Invitational’s feature race.
Simon is also looking to compete in his fourth Indy Legends Pro-Am. He is one of the most colorful characters of Indianapolis 500 history. Brimming with personality he saw the promotional value for his sponsors of being the first car to take to the track when practice opened in May. A veteran of 17 Indianapolis 500s, he scored a best finish of sixth in 1987. He was a highly respected team leader who helped launch the careers of such notables as two-time Indianapolis 500 winner Arie Luyendyk and 1992 Rookie-of-the-Year Lyn St. James.
In addition to the Pro-Am, there will be a festival of other activities including the Motostalgia car auction, the Hagerty Insurance “shine and show” car corral, a “Celebration of Motorcycles” with vintage motorcycle racing and displays, and 500+ vintage racers ranging over 100 years of automotive history racing in SVRA Groups 1 through 12. An oval exhibition featuring a racecar show of judged competition for the A.J. Watson and Sir Jack Brabham trophies led by track historian Donald Davidson will also take place. Also, for the first time ever, the professional Trans Am series will compete as the Sunday afternoon feature race. Heading the pack will be series champion Amy Ruman who has won the crown the last two years.
This year the Brickyard Invitational will be preceded by a new SVRA event at the Speedway, the World Open Wheel Challenge. This event will commemorate 50 years of Formula Ford and will welcome all forms of open wheel racecars, beginning June 8th.
SVRA Dick Simon Jphnny Parsons Jnr Indy Legends Indianapolis