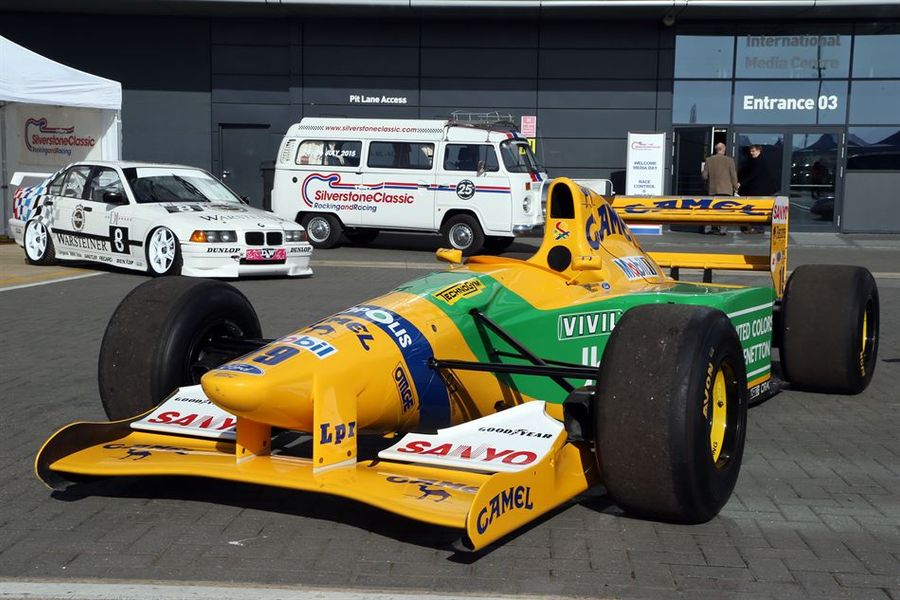 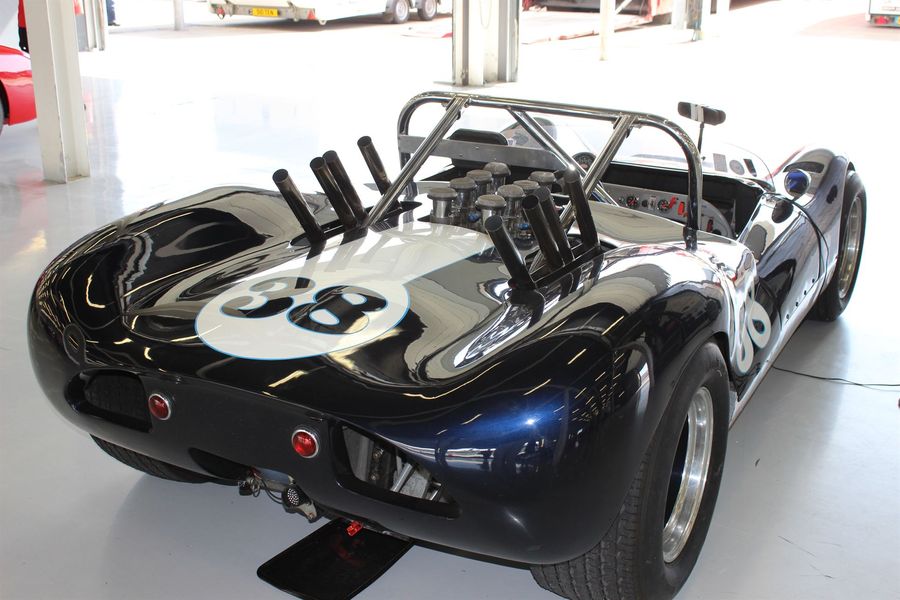 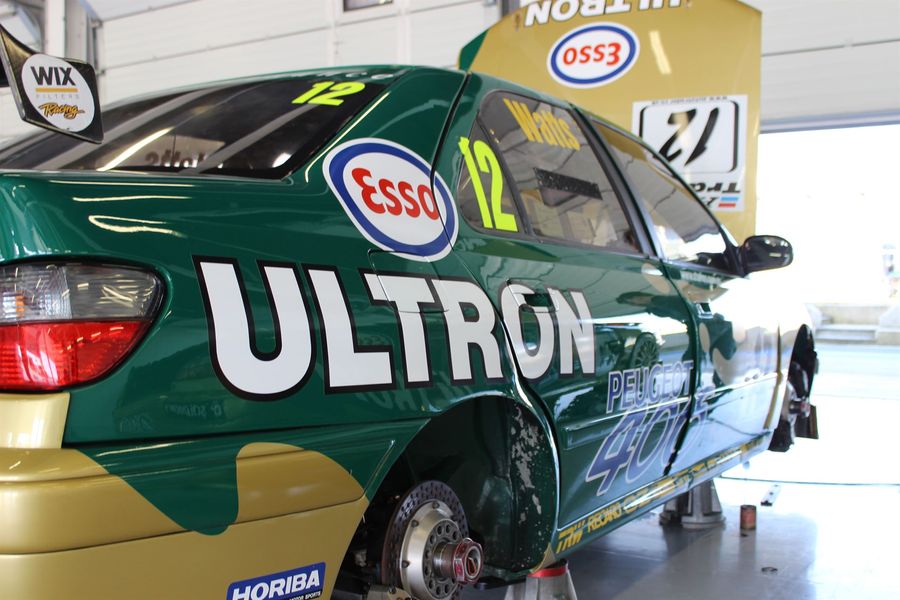 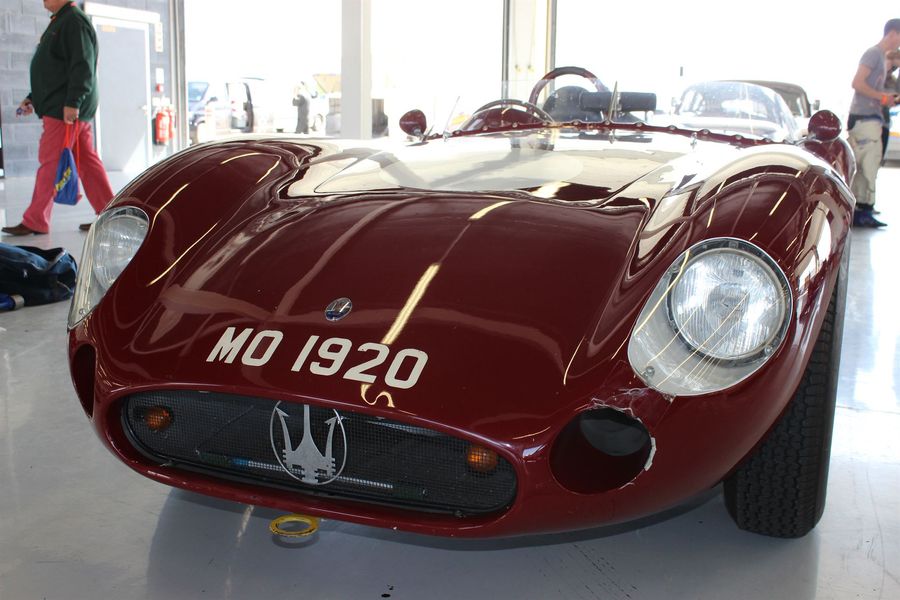 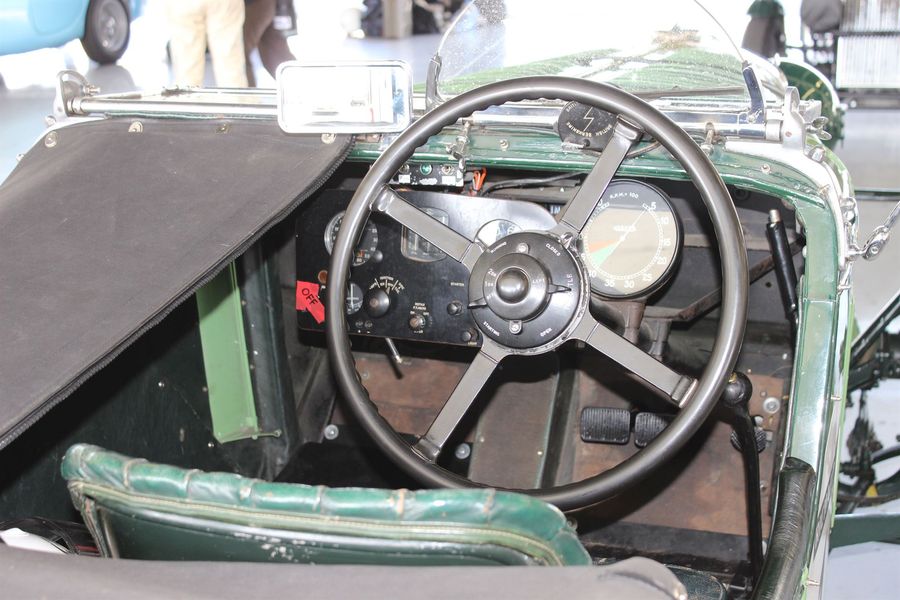 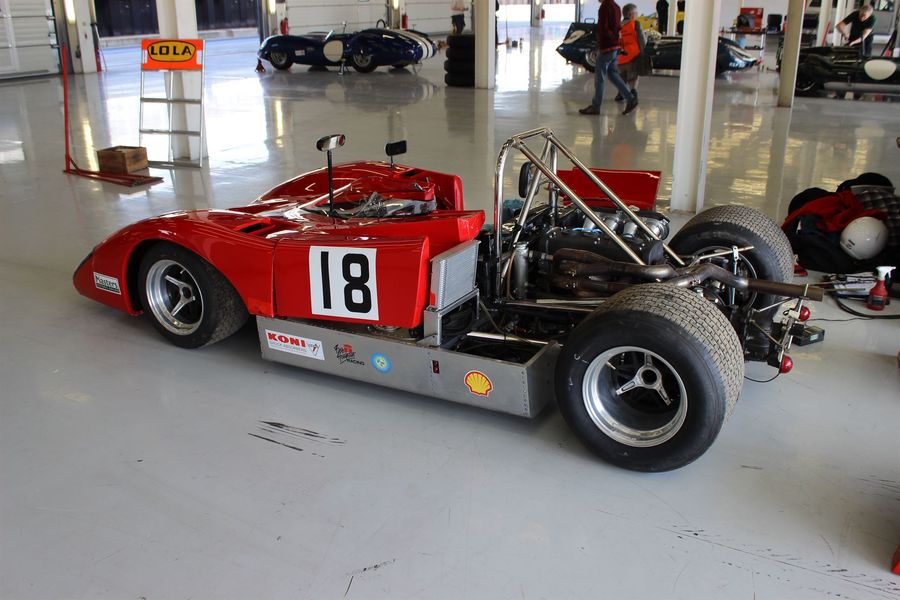 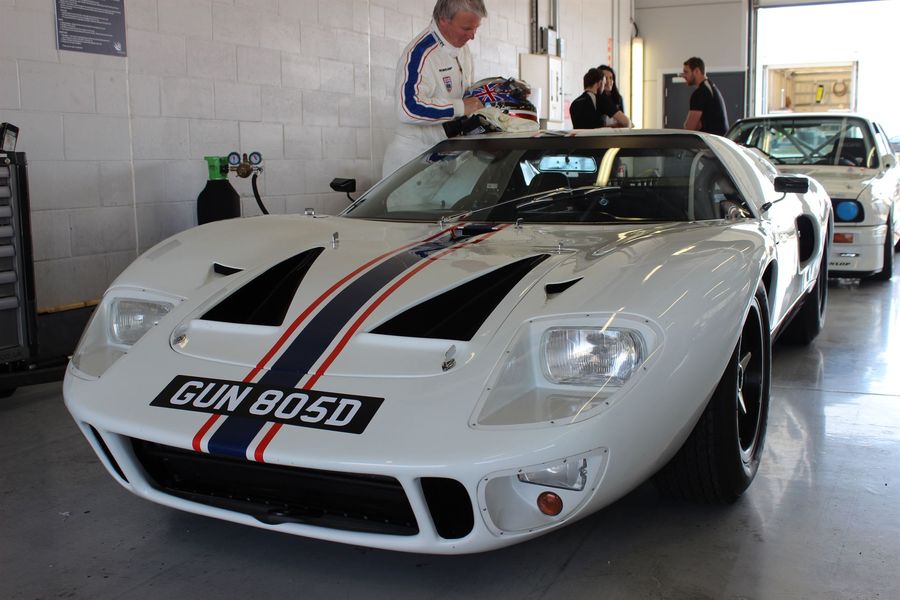 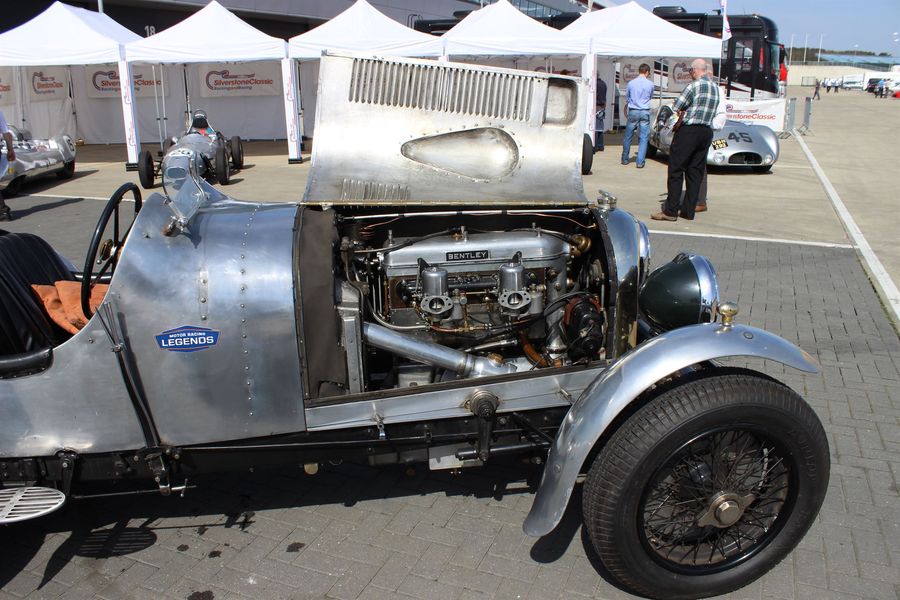 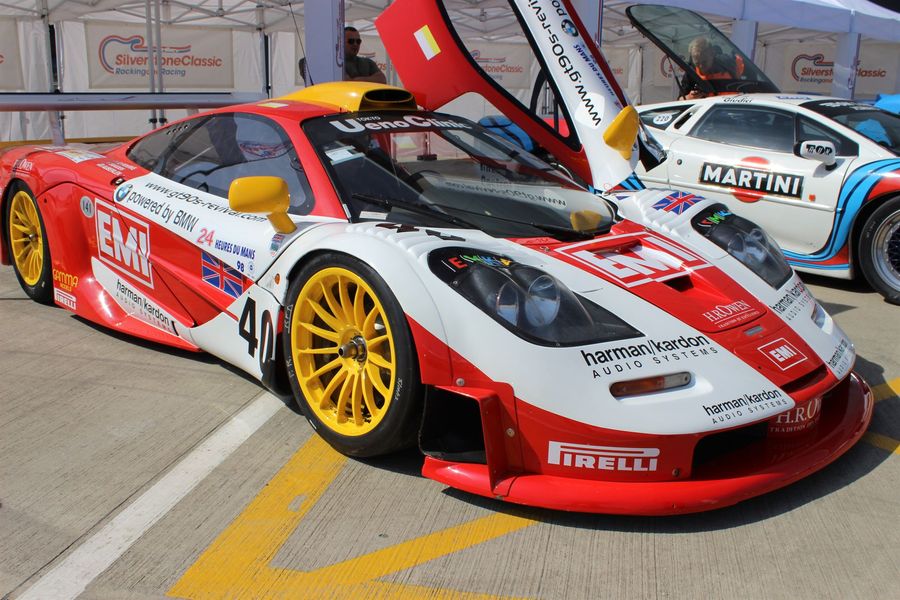 Click on the Gallery link for selected images from the day.

Now a historic event of note all on its own, today's 2015 Silver Anniversary Silverstone Classic (24th to the 26th July) Media Day featured over 130 historic racecars and saw event organisers predicting the biggest and best event yet with ticket sales well in advance of this stage in previous years - and three day pass sales exceeding the total for 2014 by the end of March - hopes are high that 2014's total of 94,00 visitors will be surpassed and SIlvertsone are targetting 100,000 spectators through the gate.

“Silverstone Classic represents the very best historic racing anywhere on the planet,” said Event Director Nick Wigley. “The breadth of cars the event attracts is simply extraordinary, from Pre-War 1920s and ‘30s machinery through early Grand Prix cars, the glamour era of the ‘50s and ‘60s to 1980s F1 turbocharged beasts, Group C sportscars and Super Touring and GT legends from the ‘90s. It really is a comprehensive spectrum.

“That generates massive appeal for enthusiasts, and throw in all the off-track entertainment too – with live music, shopping, the adrenaline zone and vintage fairground rides – and you have a superb weekend for all the family. There’s just a fabulous festival feel.

“The event slogan is ‘One day is not enough’, but perhaps we have got to the stage now where two days are not enough. By the end of March, we had already sold more multi-day tickets than we did in total last year – so it certainly looks like we are in for another record year. Ticket sales in general are running 34 per cent up on 2014, so we’re confident we will reach the magic 100,000 barrier that we have been striving towards.”

The popularity of the award-winning Silverstone Classic can be attributed to many factors, from the superb retro racing – with quite literally tens of millions of pounds worth of classic cars competing flat-out and wheel-to-wheel around the GP circuit – to stunning displays across the site’s 700 acres, with classic car clubs having been an integral part of the event since day one. Last year, more than 9,000 privately-owned classic cars were on show, and a record 114 clubs have already signed up for 2015, with 31 anniversaries being celebrated for good measure – from the 25th birthday of the Honda NSX and Mazda MX-5 to 30 years of the Sinclair C5, 40 years of the Jaguar XJS, half-a-century of the Aston Martin DB6, Rolls Royce Silver Shadow, MGB GT and 60 years of the Citroën DS and Rolls Royce Silver Cloud.

Twenty-five years ago, Stuart Graham – the only man ever to win TT races in the post-war era on both two wheels and four – was the innovator who first had the brainwave of launching the Silverstone Classic, having noted the popularity and success of similar historic events in Germany and the USA. Having presented the idea to the BRDC he was subsequently charged with seeing the concept to fruition ans thus was born the International Historic Festival, which took place at Silverstone a week after the British Grand Prix, and proved to be the catalyst that has inspired all retro-flavoured motor sport events that have followed in its pioneering wheeltracks.

“It’s extremely satisfying to see the Classic go from strength-to-strength every year,” Graham enthused, with some of the cars that competed in the inaugural edition still racing at the event to this day. “It’s now thoroughly well-established here at Silverstone and is one of the best historic events in the world. It’s exactly what we envisioned a quarter of a century ago – and it’s getting better every year.”

From Formula 1 to touring cars, GTs and sportscars to pre-war prototypes, Silverstone this summer really is where it’s at. All the traditional favourites are back in force and in fine fettle – including the FIA Masters Historic F1 Championship, the Royal Automobile Club Historic Tourist Trophy for Pre-1963 GT cars, the FIA Masters Historic Sports Car Championship for Pre-1966 GT cars, front and rear-engined Pre-1966 F1 cars and the Group C endurance racers, which will run evocatively into dusk on Saturday evening.

Appropriately enough with Silverstone having hosted the very first round of the FIA Formula One World Championship, there will be more Formula One cars racing at the Silverstone Classic than anywhere else, and they will be joined in 2015 by Pre-War Sportscars, a major feature of early Classics but one that has been absent from the bill for a number of years.

New to the scene will be the Guards Trophy – a sold-out grid of Pre-1966 GTs and Pre-1969 sportscars – and, to commemorate the 75th anniversary and Silverstone’s role as a bomber base during the Second World War, a pair of Battle of Britain races for British-built Pre-1966 GTs, touring cars and sportscars, bringing together an eclectic mix of MGs, Lotuses, Aston Martins, Jaguars, Minis and Ginettas to name but a few.

The crowd-pleasing touring cars return once again, with BTCC Champions Gordon Shedden and Matt Neal seeking a rematch in their Team Dynamics-prepared Lotus Cortina, after leading the U2TC race last year only to retire before the chequered flag.

Fellow tin-top greats and former team-mates Tim Harvey and Patrick Watts were in attendance at Media Day, reminiscing about the Super Touring heyday. Watts has purchased and restored a couple of Peugeot 406s – one of them having sat untouched in a garage in Australia since 1998. An ex-Gianni Morbidelli Volvo S40 is also expected to join the fray this year.

“These cars are just great fun to drive,” he underlined, and spoke at length later on to HistoricRacingNews.com for a forthcoming video feature. “I’ve raced an Allard and a Mustang and I’ve rallied a Metro Turbo as a works driver back in 1984, but I can honestly say the most fun I’ve ever had has been in the Peugeot. I take a lot of pleasure from working on it too – the technology underneath the skin is just incredible.”

“We had nine factory teams back in the Super Touring era and 18 professional drivers all on very healthy contracts – far more than you’ll find in F1 now!” added Harvey. “There was no expense spared, virtually no restrictions and we were testing all the time – it was the ultimate touring car formula. It’s fantastic to see these cars out on-track again, and the Classic is just a brilliant event – it offers the opportunity to race some fantastic historic cars in a wonderful laid-back atmosphere around a great track.”

Following a well-received debut in 2014, 90s GT Legends will be back this year, with the addition of Bernd Schneider’s 1997 FIA GT Championship-winning Mercedes-Benz CLK-GTR. They will be joined, to much acclaim, by a new high-speed demonstration, 90s F1 Legends, celebrating the post-DFV ‘80s/90s high-revving turbo era, when the likes of Nigel Mansell, Ayrton Senna and Michael Schumacher ruled the racetrack. The latter’s 1992 Benetton-Ford took pride of place at Media Day.

The Silverstone Classic is about so much more than the high-octane action on the circuit, with endless entertainment for all the family. There will be live music from Paul Young and Status Quo – classic British rock to complement classic British racing – and Fleetwood Mac and ZZ Top tribute acts, hot air balloon flyouts, a twilight pyrotechnics display and Lancaster, Spitfire and Hurricane aerial flypasts.

A new adrenaline zone includes a zip wire, climbing walls, Wacky Wheeler Jeeps, a reverse bungee swing and a 40m-high giant wheel for a panoramic view of all the action. Interactive driving activities are provided by the Off-Road Zone, Caterham Drift Experience, the 2CV Tin Snail Challenge, rally and 4x4 rides and a street car shoot-out – the vast majority of which is included within the general ticket price.

Throw into the mix a Vintage Funfair, giant scalextric, a huge retail shopping village – with more than 170 exhibitors already signed up – Silverstone Auctions and TV presenter Mike Brewer’s popular Car Clinic, and all the ingredients are firmly in place for a spectacular anniversary event.