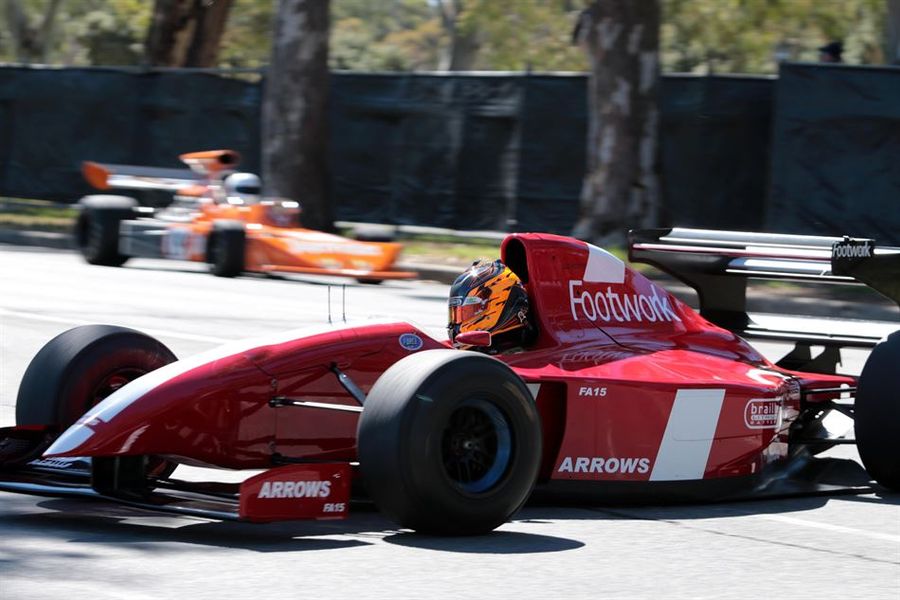 Tim Slade has banked a new Victoria Park Sprint lap record at the Adelaide Motorsport Festival yesterday. Driving a 1994 Footwork-Arrows FA15 / Cosworth, Slade eclipsed Ivan Capelli’s 2016 benchmark by 0.2 seconds to leave the record standing at 43.03 seconds heading into Sunday. Huge crowds enjoyed bright sunshine and some stunning machinery as the Victoria Park Sprint commenced as part of the Adelaide Motorsport Festival in South Australia.
Slade punched out the quickest time late in the afternoon, setting a benchmark for his rivals to chase in the two sessions to be held tomorrow.  Slade’s Supercars rival Cam Waters was second (44.73) in the Benneton BMW, while Paul Faulkner was fourth in the ex-Alan Jones Williams FW07.
“It is cool,” Slade said. “It is a shame that I didn't have another session to lower it because the more laps you do the more family you get with the car and you can explore the limits. I was just out there going round and round and having fun.
“I have driven some pretty cool stuff. It is a ballsy car and I really respect the guys back in the day driving those cars.
“It looks so hard when you watch the onboard vision, and it is hard. It is physical, and you have to be pretty ballsy to go fast on high speed circuit.”
While the Formula 1 cars were the star attraction, a roll-race between a Formula 1 car and a sedan car also thrilled fans.  Josh Kean – driving the Arrows F1 car that had just set the lap record – took on Todd Hazelwood in a Time Attack racer.
The 1350bhp Street FX Toyota WTF86 was due to take part in the race, however it’s prodigious power proved too much – the car snapping a drive shaft just before it was due to race. Its substitute was a 1000hp Nissan GT-R owned by Matt Longhurst.
Accelerating from 30kph, the Formula 1 proved too strong and edged to victory over 300m in two of the three runs – the GTR pipping him in the finale’.
Craig Lowndes returned to the wheel of a Formula 1 car, getting a dedicated session behind the wheel of the iconic turbocharged Benetton-BMW B186. It marked a return to the Supercars legend’s roots, Lowndes progressing through the open-wheel ranks of Formula Ford and Formula Holden prior to his Supercars career.
Lowndes came within one step of Formula 1 via a full-time campaign in Formula 3000 in 1997. He also experienced a modern Formula 1 car in 2011 in a promotional event at Mount Panorama
“It was great! It did everything it was expected to do,” he said. “In comparison to others - to the McLaren I drove - it’s extremely different. The McLaren was all paddle shift, electronics.
“The Benetton has a heap of grip for the power it’s got. They lied about the rev limiter.. it doesn’t go to 11, goes to about 10 so I found that a few times!
“It does all the things you want it to, grips, turns. The only thing for us was to learn that you can’t use the kerbs at turn one like you can a Supercar.”
Lowndes said he had to adapt to the old-school nature of the 1986 Formula 1 car: “I think the last time I drove an open-wheel car with a gear stick car was 1997.. so it’s been 20 years. It was a massive experience. The car itself is iconic and to drive it you realise how good the guys were in the day.. they were brave.”