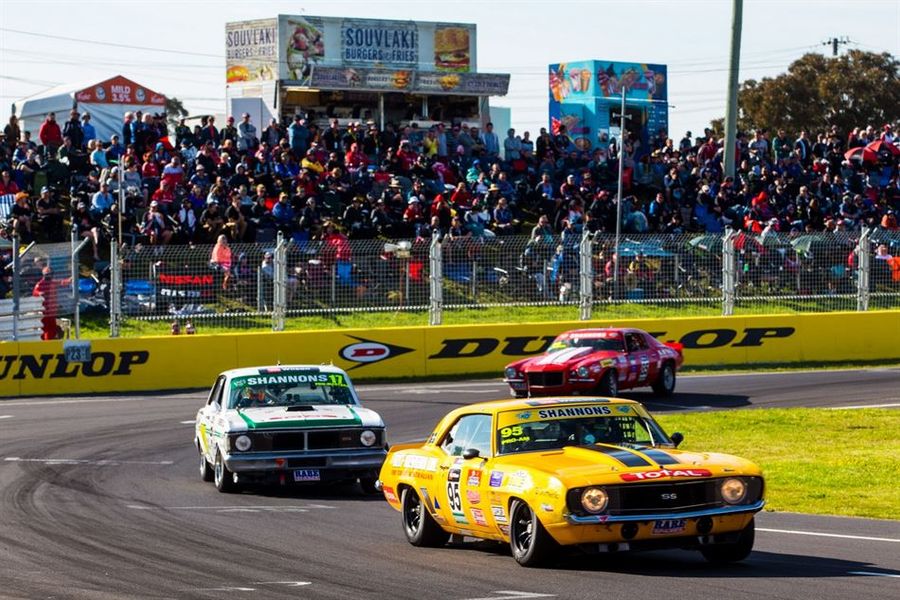 A final race victory for Glenn Seton has handed Australia the first ever Wilson Trans-Tasman Challenge, as the Touring Car Masters and Central Muscle Cars went head to head at Mount Panorama. The third and final race of the weekend saw the TCM competitors take one side of the grid and CMC runners the other, the grid determined from the finishing positions of the opening race of the weekend.
Glenn Seton and Dean Perkins raced wheel-to-wheel into the opening corner, the big red XD Falcon slipping in behind the Bathurst legend on the run into turn two. Bruce Anderson (Pinepac Mustang) was the only driver with any serious dramas at turn one, the Mustang hardtop squeezed wide at Hell corner – catching the damp grass on the outside of the circuit and spinning up the escape road without any damage.
Seton powered away on the opening lap, Perkins and fellow Kiwi Falcon racer John Midgley leading a freight train that included John Bowe, Steven Johnson, Adam Bressington, Mark King and Brett Youlden. Midgely held third until the fourth lap, when he locked a brake at Hell corner and ran wide through the gravel trap, making contact with the wall and ultimately retiring his Falcon after a storming drive at the pointy end of the field.
As Seton charged away in front, Bowe continued to battle with Perkins – only able to sneak through on the fifth of six laps after finally overcoming the power of the Kiwi Falcon. Bowe pushed hard on the final lap and set the race’s fastest lap – only 0.1s behind the lap record held by Steven Johnson – and closed the margin to the leader down to just 2.5 seconds at the line.
The Thunder Road Racing Team Australia driver recorded his third TCM race win at Bathurst and fourth of the season as the series heads into the final round – set for the streets of Sydney Olympic Park in December this year.
Adam Bressington finished third, working his way past Perkins on the final lap after a bold move down the inside at Forrests Elbow. The Whiteline Racing Camaro was quickly re-passed as the pair ran side-by-side down Conrod, but with superior top-end grunt re-took the position before they entered the chase for the final time.
It capped off a stunning weekend for the Camaro ace who has impressed since his return to the category earlier this year.
Perkins survived to fourth place, proudly flying the Kiwi flag all weekend long and ending it with his best drive of the weekend. Ever-competitive and at the pointy end of the grid, Steven Johnson finished fifth, Mark King sixth and Adam Garwood seventh.
The young Tasmanian completed a superb weekend with his third straight starring performance thanks to a charge through the field – the little Capri only 12th at the end of the opening lap. Brett Youlden’s strong weekend saw him rewarded with eighth place in the Trans-Tasman challenge race, Jason Gomersall finished 9th and David Hopper third of the Kiwi cars home in 10th.
With points awarded to each car based on their country of origin, Australia won the inaugural Wilson Trans-Tasman Trophy 505 points to New Zealand’s 354.
In an enormous compliment to all competitors, all three races and 18 laps of racing went without Safety Car interruption, while both practice sessions were held without the need of a red flag.
1 Glenn Seton (Ford Mustang Coupe) 6 Laps in 14m02.7945s
2 John Bowe (Holden  Torana SL/R) 14m05.1688s
3 Adam Bressington (Chevrolet Camaro SS) 14m09.0947s
4 Dean Perkins (Ford Falcon) 14m09.4101s
5 Steve Johnson (Ford Falcon XY GTHO) 14m09.8640s
6 Mark King (Chevrolet Camaro RS) 14m10.2023s
7 Adam Garwood (Ford Capri Perana) 14m13.7644s
8 Brett Youlden (Holden  Monaro GTS C) 14m14.0804s
9 Jason Gomersall (Holden  Torana A9X) 14m14.3193s
10 David Hopper (Chevrolet Camaro) 14m14.9612s
Bathurst Seton TCM Touring Car Masters