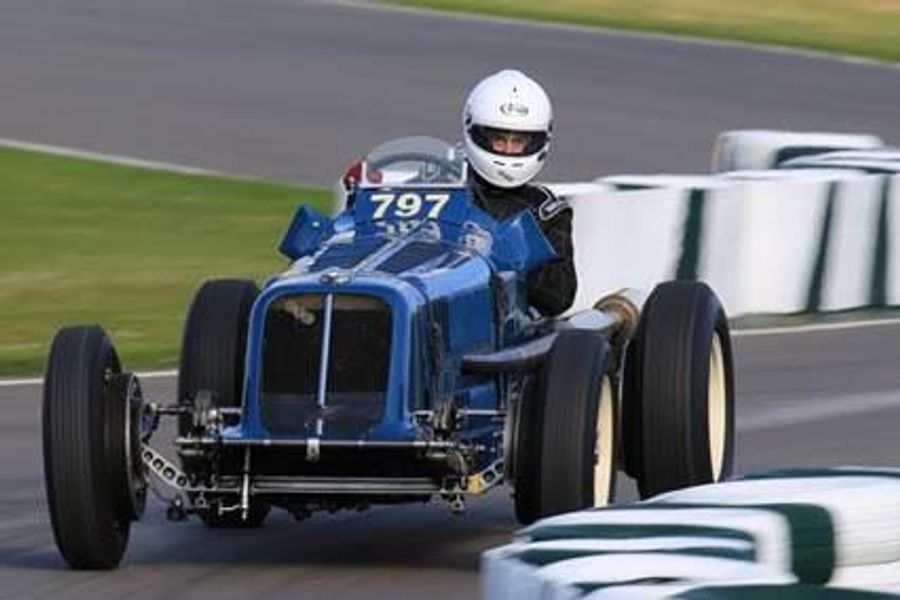 Whilst an ERA claimed the expected victory at the Vintage Sports-Car Club’s Autumn Sprint at Goodwood on Saturday 22nd of October, there was a somewhat surprise result as Ben Fidler set ‘Fastest Time of Day’ guest driving Nick Topliss’s R4A, ahead of the owner competing the much-fancied R4D, owned by Ben’s father, Brian Fidler.
The day marked only the second competitive outing for the younger Fidler in the ex-Pat Fairfield and Bob Gerard voiturette following a debut performance at the same event last year and, having set the pace during the morning Practice, he led the way in the afternoon’s competitive Timed Runs. His best of 98.35 seconds was good enough to claim victory and the Colerne Trophy – aptly depicting a model Spitfire, in keeping with the celebrated venue’s aeronautical heritage – for a second time, following his success in 2012 in ERA AJM1, with Ian Baxter an impressive runner-up in his 1937 Alta Single Seater, ahead of Topliss in the revered R4D.
It was also an historic day as two of the Club’s ‘Young Guns’ enjoyed memorable outings for the famous Bourne-based ERA marque, with Nick Topliss’s 20-year old son, James sharing R4A with Fidler, whilst James Crabb shared the sister R12C with father, Terry, who set a new class record amongst the 1.5 litre racing machinery.
There were also record-breaking performances from experienced Frazer Nash exponent, Patrick Blakeney-Edwards, who dominated the Sports-Cars classes with a rapid time of 105.39 seconds – also the fastest Pre-1931 Vintage mark on the day – and fellow ‘Chain Gang’ representative, David Wylie, setting both Class and Vintage record to get the better of the perennial Class 10 leading HRS of Dudley Sterry in his AC-engined ‘Nash.
A closely fought contest amongst the day’s Pre-1918 Edwardian machinery saw Hudson Super Six pilot, James Collins take honours, less than a second ahead of Peter Wilson’s aero-engined Brasier Voiture de Course.
Elsewhere, there were class wins for a number of other VSCC frontrunners, including Joe Tisdall’s Austin 7 Ulster, John Guyatt in his Talbot-Lago, David Pryke’s Morgan/Riley and Julian Grimwade in the Frazer Nash Norris Special.
It proved a fitting finale to the Club’s Speed Season and inaugural Speed Championship, as the paddock bustled with a fantastic crowd of enthusiasts, many arriving in their own pre-war cars to form a wonderful gathering on a stunning autumnal day in West Sussex.
ERA VSCC Goodwood Sprint