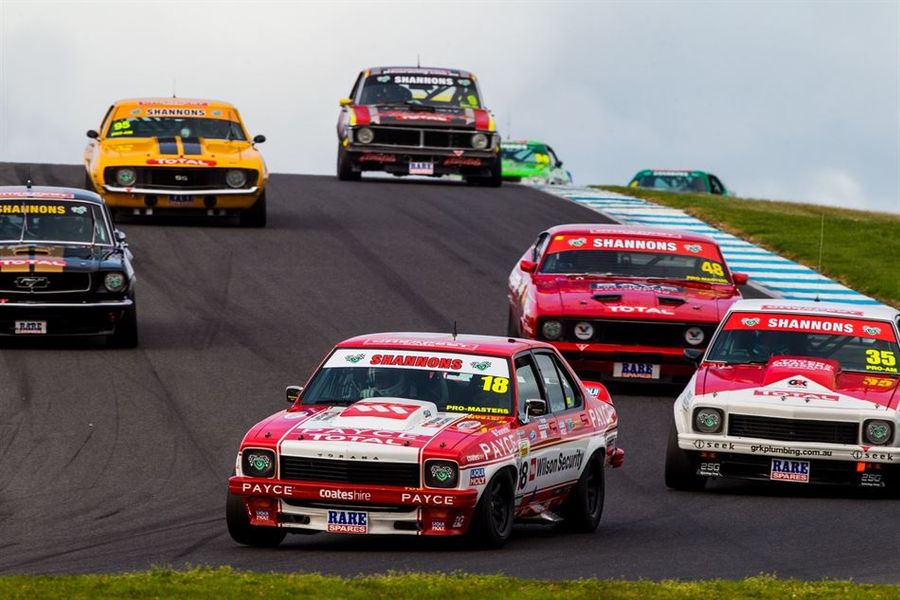 Eddie Abelnica brilliantly brought to an end a 64-race streak without a Touring Car Masters race victory, thanks to a powerful performance at the Phillip Island Grand Prix circuit today. Abelnica became the ninth different winner of the 2016 season when he stormed through in his Melbourne’s Cheapest Cars XB Falcon hardtop to the win from fourth on the grid, passing Glenn Seton, Jason Gomersall and John Bowe to do the job in a cracking race.
It was the popular Melbourne racers first win since Bathurst in 2013, and the first win for a Falcon Coupe since the final round of the same year.
The race had three different leaders across its 10-lap duration and included conditions that changed from dry at the start to mildly damp mid-race. Starting on the front row, Bowe and Gomersall battled in the opening laps, swapping the lead on several occasions in their two Holden Torana’s before Gomersall was able to open a small lead on lap four.
The same lap saw Andrew Fisher pull to a halt at the exit of turn one, bringing out the Safety Car while the Jesus Racing Falcon was recovered. Gomersall led on the restart but was quickly passed by Bowe, who was revelling in the dicey conditions in his Wilson Security SLR 5000.
The pair continued to battle for the following lap and ran side-by-side into turn one on the eighth of ten laps, Bowe holding the ascendency right up to the exit of turn two - where he ran wide and surrendered the lead to Gomersall.
Unfortunately, the A9X driver would only hold the top spot for two more turns – understeering wide at turn four and handing the lead to Abelnica, who had also powered past Bowe when he ran wide.
After three lead changes in the one lap, the big Falcon was never headed from there and powered to victory ahead of Bowe and Glenn Seton – who ran quietly in the top four for the entire race.
Adam Bressington finished an outstanding fourth in the Whiteline Racing / Fabre Chevrolet Camaro with Gomersall ultimately fifth following his trip off the road at Honda. Brett Youlden stormed through from 10th on the grid to sixth at the finish, shaded to the line by Steven Johnson (Falcon GTHO) and Jim Richards’ AMC Javelin.
Tony Karanfilovski and Leo Tobin completed the top-10 in what was arguably one of the races of the season. Andrew Fisher was the only non-finisher, while Keith Kassulke was an unfortunate non-starter following an engine drama in qualifying.
Earlier in qualifying, Bowe secured his third pole of the year with a record 1m39.83s lap, while Jason Gomersall qualified second for the fourth straight round this year.
Glenn Seton and Eddie Abelnica lined up on the second row with Adam Bressington, Jim Richards, Steve Johnson, Fisher, Mark King and Brett Youlden completing the top-10.
The Touring Car Masters field will tackle a further two races on Sunday’s Shannons Nationals program at Phillip Island.
Philip Island Race One Result:
1 Eddie Abelnica (Ford Falcon XB, 5800cc) 10 Laps in 21m:29.6504s
2 John Bowe (Torana SLR 5000, 5047cc) 21m30.1502s
3 Glenn Seton (Mustang Coupe, 5000cc) 21m30.6210s
4 Adam Bressington (Chevroelt Camaro SS, 5800CC) 21m30.7086s
5 Jason Gomersall (Torana SLR 5000, 5000cc) 21m31.4741s
6 Brett Youlden (Monaro GTS Coupe HQ, 5800cc) 21m33.5225s
7 Steve Johnson (Falcon XY GTHO, 5800cc) 21m35.5991s
8 Jim Richards (AMC Javelin, 5890cc)  21m36.0182s
9 Tony Karanfilovski (Mustang Trans Am, 5800cc) 21m43.0442s
10 Leo Tobin (Boss Mustang, 5810cc) 21m49.6281s
Phillip Island Grand Prix circuit Jason Gomersall Eddie Abelnica Touring Car Masters Glenn Seton Falcon Coupe John Bowe