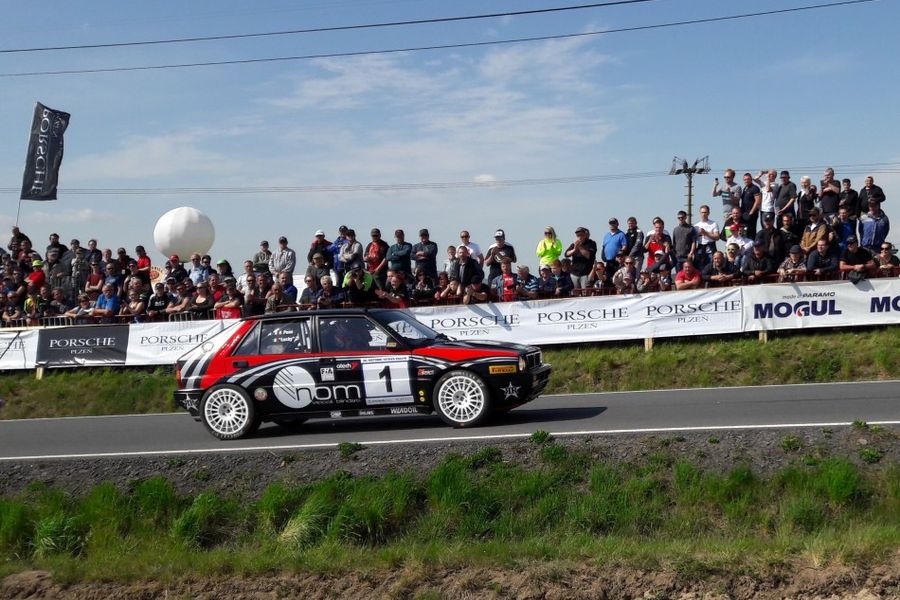 After winning Round 1 of the FIA European Historic Sporting Rally Championship in Spain last month, Italian crew ‘Lucky’ and Fabrizia Pons took their second win of the season in the no1 Lancia Delta HF Integrale 16v. They finished the 28 Historic Vltava Rallye in the Czech Republic over three minutes ahead of the second placed car.

Day two of the rally was held over eight special stages and after the rain and high winds of the opening day, the weather was certainly smiling on the competitors.

Some of the crews who were listed as retired on Leg 1 were back out on day two, with time penalties added for the stages they missed due to the issues they encountered.

SS7 saw Category 1 overnight leader Ernie Graham fall back down the order after the Ford Escort suffered a puncture, losing the British crew over four minutes on the stage.  The no34 BMW 2002 Ti of Michael Putz took the lead but the Austrian also hit problems on SS10 when a gearbox problem forced the BMW into retirement.

It was another BMW 2002 Ti that took the lead of Category 1, with Finland’s Sverre Norrgård in the no45 BMW taking the victory, finishing 35 seconds ahead of the no36 Ford Escort of Heiko Dlugas, with Ernie Graham clawing his way back to third place just 6.4 seconds behind the German Escort.

Reigning Category 2 Champion Laszlo Mekler built on his overnight class lead to finish the final stage 56.9 seconds ahead of the no14 Porsche 911 RS of Italian Paolo Pasutti, with the no27 Porsche 911 RS of Belgium’s Carlo Mylle in third place.

2018 Category 3 Champions Karl Wagner and Gerda Zauner took their first win of their 2019 campaign, the Austrian duo finishing the 28 Historic Vltava Rallye in second overall in the no8 Porsche 911 SC and over four minutes ahead of the second placed car in class, the no11 Porsche 911 SC of Finland’s Pentti Veikkanen.  The no10 Audi Quattro of ‘Zippo’ finished third 10 minutes behind the lead Porsche after the Italian crew had a two minute penalty when a Turbo issue on SS4 meant they missed SS5 on the first leg of the rally.

The Category 4 and overall winners were ‘Lucky and Fabrizia Pons in the no1 Lancia Delta, with the no2 Lancia 037 Rally of Ville Silvasti and Risto Pietilainen in second place in class and third overall behind the no8 Category 3 Porsche. The Finns were 3 minutes 14 seconds behind the lead car after SS14 and over four minutes ahead of their countrymen Ari Kirvesmäki and Jukka Jämsen in the no12 Toyota Corolla.

The next round of the 2019 FIA European Historic Sporting Rally Championship will be the 11 Rallye de Asturias Histórico in Spain on the 23rd-25th May 2019.