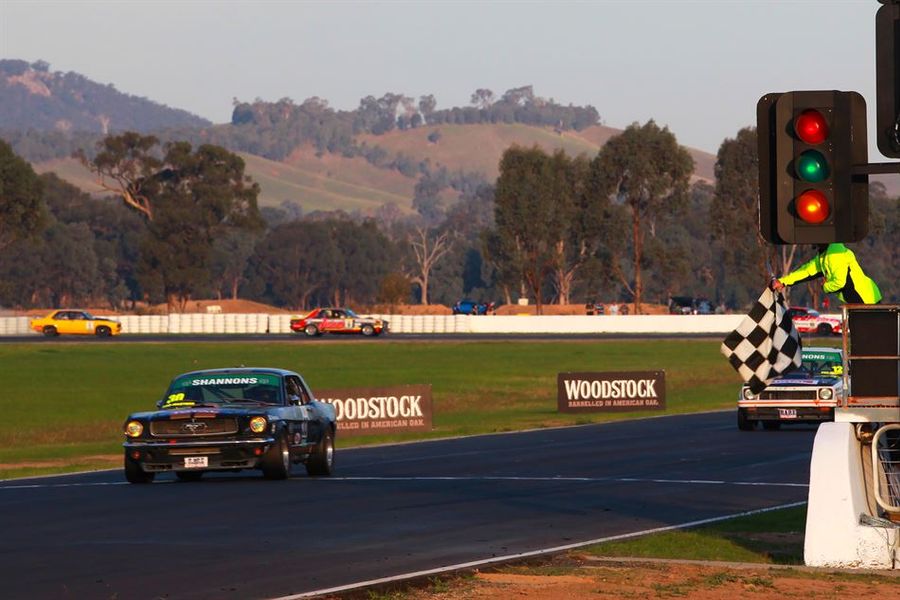 John Bowe may have won the third round of the 2016 Touring Car Masters with two wins from the three races, but fellow racing legend Glenn Seton was arguably the star of the show at Winton Motor Raceway this weekend. Bowe repeated his 2015 winning performance aboard the Payce / Wilson Security Holden Torana SL/R 5000 by winning races one and two at Winton – while Seton stormed from 16th to first in a thrilling trophy race later in the day.
The 12-lap sprint was a thriller with Seton calmly working his way through the field to get to second place by the start of the penultimate lap. He then chased down leader Adam Garwood and grabbed the lead with a stunning pass at turn nine on the final lap – becoming the sixth different winner from the 2016 season so far.
Seton finished third in races one and two at Winton – making it five straight races in third place for the Thunder Road Racing Team Mustang at the Winton circuit. His thrilling performance in the Waeco Trophy Race was just his second ever TCM race win and the first for the team. His victory was also the first for a Ford Mustang since the final round of the 2015 season – the eight races between wins the longest ever streak without the iconic Ford brand winning in TCM history.
Garwood finished second in the WAECO-supported Trophy race while Tony Karanfilovski finished third. The race was action-packed from the start and saw an intense battle for much of it’s duration between Greg Garwood (Ford Capri) and Cameron Tilly (Valliant Pacer).
The pair ultimately finished fourth and fifth, respectively, while John Bowe started 20th and finished sixth. Andrew Fisher, Bruce Williams, Sven Burchartz and Eddie Abelnica completed the top 10.
Bowe won the ProMaster round ahead of Glenn Seton and Steven Johnson, his second round win in a row this year.
Jason Gomersall won the ProAm round in his brand-new Holden Torana A9X, showing the race winning potential of both car and driver this weekend.
Having qualified second and finished in the same position in race one on Saturday, Gomersall led race two for three laps, holding off John Bowe’s four-door Torana until the defending champion was able to sneak by at turn one. He then held off the advances of Glenn Seton in a battle for third, backing up his earlier performance. Gomersall labelled the performance his ‘best ever’ in TCM after having previously not enjoyed the best of luck at the Winton venue.
Andrew Fisher and Jason Gomersall completed the ProAm podium at Winton.
Porsche 911 racer Sven Burchartz edged out Adam Garwood to win his first ProSports round of 2016, while TCM newcomer Darren Beale finished third on his debut – racing the ex-Leo Tobin HQ GTS Monaro.
The next round of the Touring Car Masters series will see the championship return to Darwin’s Hidden Valley Raceway.
John Bowe leads the ProMasters standings by just 56 points, former teammate Stephen Johnson currently second following a consistent start to his championship.
Eddie Abelnica sits third in the standings, a further 13 points behind Johnson heading into a circuit which should suit his Melbourne’s Cheapest Cars XB Falcon.
Jason Gomersall holds a strong lead in the ProAm standings after three rounds while Adam Garwood has an even stronger margin at the top of the ProSports standings.
2016 Touring Car Masters Winton Motor Raceway Glenn Seton John Bowe