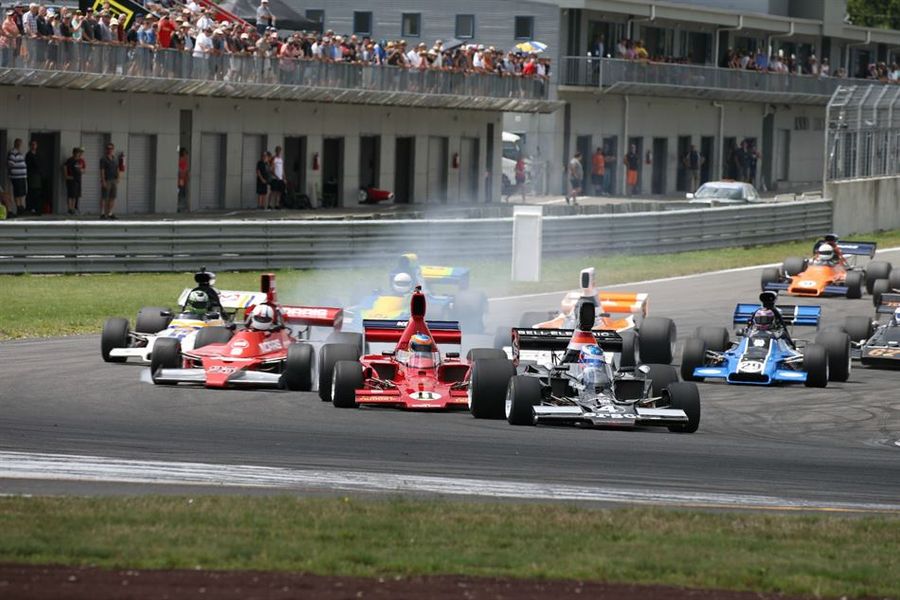 Higgins, a former NZ Formula Ford, TRS and Historic Formula Pacific class front-runner from Auckland finished second to category supervet Ken Smith (Lola T332) in the first series race on Saturday but won both Sunday races, the first after leading from start to finish, the second – the GP – after tagging on behind Smith and passing him for lead with two laps to go.

Smith was always a factor – crossing the finish line just 0.265 of a second behind fellow front-row starter Higgins in the first eight lapper in the morning, then leading the GP for the first eight laps, but struggled with gear selection and brake issues as the feature race wore on allowing Higgins to catch, pass and ease away over the final two laps and cross the finish line 4.370 seconds behind.

“No excuses though, ‘Smith said afterwards. “He’s (Higgins) driving real good at the moment. I definitely have some competition on my hands now.”

“Ken was always there, so I knew I couldn’t back off, even just a bit,” said Higgins, who won the series title in a family-run Lola T400 in 2014, and has returned this year in what is emerging as a very  successful partnership with Lola T332 owner, and former series front runner himself, Stu Lush.

Third in both races today was Christchurch 21-year-old Michael Collins driving the Alistair Hey-owned McRae GM1. Collins ran just off the back of Higgins and Smith in each race today, but was slowed latter on himself selecting gears..

UK-based series regular Greg Thornton enjoyed a strong start to the GP, initially running ahead of Collins, only to have the unique 3.4 litre Ford Cosworth engine which powers his ex Alan Jones March 75 let go,

Defending series champion Brett Willis (Lola T330) and Shayne Windelburn (Lola T400) both kept their best till the last race with strong finishes line astern in  fourth and fifth places respectively while Tony Galbraith (Lola T332) was the best of the newcomers in sixth.

“Yes he said,” we found a bit of speed after the morning race (where he had an engine issue) and the more I drive the car the more I am getting comfortable and therefore confident in it.”

McLaren M22 driver Tim Rush was also feeling (and looking) more confident, finishing 11th,  attributing his form to a family decision to hand over the setup and running of the car to John Crawford’s Motorsport Solutions team.

“It just means I can concentrate on driving the car and it is really paying dividends,” he said.

The other new face in the field, Tauranga classic racer Mike Creswell (March 75A/1) admitted to a steep learning curve but had a clean, fast run through to 11th place in the GP.

As he did in the first weekend race on Saturday Higgins used the inside line to hold Smith out into and through the first turn and despite again setting the fastest race lap (1.26.616) this time Smith could not find a way past.

Grant Martin (Talon MR1/A) was again quick early on, slotting into third ahead of Aaron Burson (McRae GM1) and Michael Collins, but was an early dnf with an engine issue.

With Martin gone Michael Collins caught and passed Aaron Burson for third place with Greg Thornton up to eight  by the fourth lap.

Between  Burson and Thornton, David Arrowsmith (Lotus 70) was the standout in a Class A car, spending the early laps trying to find a way a past David Banks (Lola T332) for sixth.

At the flag Greg Thornton had made it up to fifth, Brett Willis up to eighth,

Saturday’s race was won by pole-setter Ken Smith from Higgins, Grant Martin, Aaron Burson and Collins. The series now heads north to Hampton Downs as support for the TRS NZ Motor Cup round next weekend.