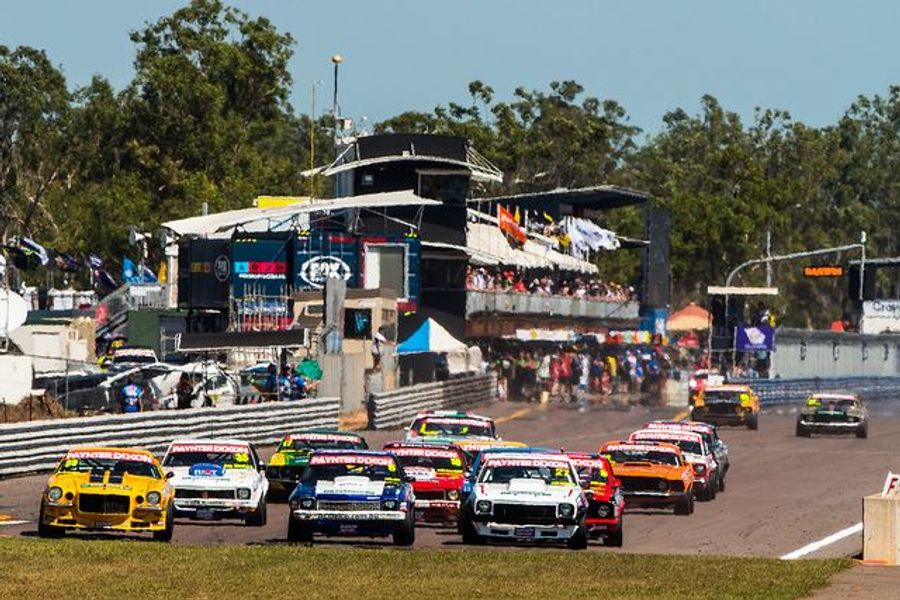 Steve Johnson has charged to the top of the Paynter Dixon Touring Car Masters standings thanks to a victory in Race 10 of the 2018 series, while Mark King returned to the winners list with a stirring win in the Dometic TCM Trophy Race earlier in the day at Hidden Valley.

Johnson’s lights-to-flag win came at the expense of fellow front-row starter and closest title rival, John Bowe, who was turned around on the opening lap of race 10 as the field rushed into turn one. The multi-car drama left several cars battered and bruised, with Bowe amongst them.

The former series champion recovered to seventh place at the end of 10th race, however could only watch as Johnson streaked away in front to take his seventh race win of the season.

Adam Bressington was a star performer in the Whiteline Racing / VDC Camaro as he stormed from the third row of the grid to second at the finish. He jumped to fourth through the turn one dramas and then slipped past Bruce Williams with a strong move on the fourth lap.  He then passed Jason Gomersall following a late-race restart to trail Johnson home in a US Muscle-Car 1-2 finish.

The BigMate Racing Torana of Gomersall was third after he also slipped past Williams late in the race; the ACDelco car rounding out the top four.

Jim Richards was fifth in the Shannons Insurance Falcon Sprint while Ian Woodward posted his best ever Paynter Dixon Touring Car Masters finish in sixth. Bowe’s recovery drive saw him finish seventh, despite damage to both the front and rear of his Torana on the right-hand side.

Also damaged was Mark King, who was also caught up in the issues on the opening lap – still, the King Springs Camaro was able to finish eighth. Cameron Mason also battled through damage to post a ninth-place result, while Cameron Tilley was 10th having dropped to the back of the field after taking evasive action and running off the road at turn one.

Failing to finish was Jim Pollicina, who saw his Holden Torana expire spectacularly after just four laps. Ben Dunn’s Chevrolet Monza was another out on the same lap with his car trailing oil, while Andrew Fisher was caught out by the slippery surface and came off the road.

The dramas brought out the Safety Car while Pollicina and Dunn’s cars were recovered.

Tony Karanfilovski parked his Mustang with overheating issues on the same lap.

Earlier in the day, Mark King spectacularly charged to victory in the Dometic Trophy Race, which featured a jumbled grid from the qualifying order. The race featured four different leaders across the 10-lap duration as Tony Karanfilovski jumped out to an early lead in his Ford Mustang.

He and Bruce Williams battled for the top spot while King was only sixth at the end of lap one. The lead changed on the fourth lap when Williams and Karanfilovski bumped while battling for the lead at turn one, the Mustang spearing off to the outside of the circuit.

That elevated Jim Pollicina to the lead as he took advantage of Williams’ lack of momentum and wrestled his way to the front – a position he would hold for the next four laps.

A brief Safety Car interruption bunched the field, with a stunning restart from King setting up his charge to victory. Crossing the line fifth as the green flag flew, he stormed around the outside at turn one and passed three cars before the slipping past Pollicina a few corners later to take the lead.

The result was King’s third Touring Car Masters race win and his first since the 2014 season – achieved at the same venue. Pollicina’s MoComm Communications Torana was promptly hustled down the order and would ultimately finish seventh.

Williams retained second throughout the race while Andrew Fisher posted his best finish of the year in third.

Races 11 and 12 will complete the fourth round of the Paynter Dixon Touring Car Masters tomorrow at Hidden Valley Raceway.