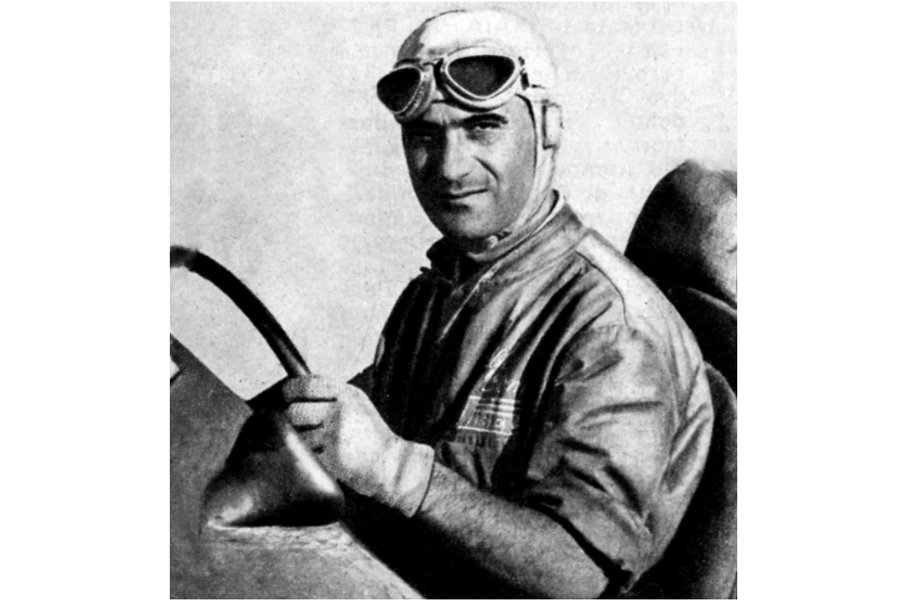 Consalvo Sanesi was born 28th March 1911 in Terranuova Bracciolini, near Florence, though the family later moved to Milan. He was best known for his role as test driver with Alfa Romeo but also raced their Tipo 158 and 159 cars and competed in five F1 World Championship Grands Prix, debuting on 3rd September 1950.

While living near Portello, he became involved with Alfa Romeo in 1929, working on the cars of well known race driver Count Gastone Brilli-Peri, who was a friend of the Sanesi family. He also acted as riding mechanic for him in the team Alfa Romeos though Brilli-Peei was sadly killed during 1930’s Tripoli Grand Prix.

Consalvo remained with the team and became a mechanic to a number of famous drivers, including Gofferdo Zehender, Mario Umberto Borzacchini and Giuseppe Campari. The official Alfa Romeo team later transferred to Scuderia Ferrari though he chose to stay at Portello as a production car test driver. The team eventually returned though and he was given the opportunity to become a test and race driver for them, which he eagerly accepted.

In 1939, while paired with Ercole Boratto (who was Mussolini’s long time chauffeur) they won the Tobruk-Tripoli 1800km endurance event with a 6C 2500 SS. In the following year he and Pintacuda contested the Mille Miglia and finished seventh in their 6C 2500SS and during the year he became the chief test driver after Marinoni was sadly killed when he collided head-on with a lorry while testing a Tipo 158 racer.

In September 1940 the Tipo 512 Monoposto race car was given its first road test with Consalvo at the controls. During the war, the Alfa Romeo experiences division (ESPE) was moved to escape from the German raids and the allied bombings. The racing cars were secreted in a well-hidden garage in Melzo and retrieved at the end of the war by Consalvo himself, who towed them with a truck to Portello and drove through a half-destroyed Milan en route.

After the War, as well as being the head test driver he finally became an official driver in Alfa Romeo’s team in 1946, together with Farina, Varzi and Trossi. As chief test driver in the Alfa Romeo Tipo 158, he was the first driver to go out on the Monza track after its war-time repairs. The 158 cars were updated and improved, plus made more powerful, and Alfa Romeo would go on to win two World Championships in 1950 and 1951 with Nino Farina and Juan Manuel Fangio, and Consalvo himself achieved some important results. Alfa’s designers trusted him totally and he was part of the legendary ’Magnificent Seven’ testers, alongside Moroni, Bonini, Galvan, Brignoli, Distani and Zanardi. Enzo Ferrari praised him and his work as a tester and tried to take him on at Ferrari as an official race driver but his heart belonged to Alfa Romeo.

1946 saw him as one of five Alfa Romeo 158 drivers in the Turin GP, held at Valentino Park and he was also a heat winner and third overall at Milan that year. He had a second place finish the following year at Bari, behind Achille Varzi, and he took pole position and finished third in the Italian GP at Sempione Park in Milan.

His best GP finish came in 1948’s French GP when he was second at Reims behind Jean-Pierre Wimille though he retired his Tipo 158 in the Italian GP at Valentino Park in Turin. Late in the year, he finished third plus achieved the fastest lap at the Monza GP in October. He also contested that year’s Mille Miglia in a 6C 2500 (with Sala), though they did not finish but in the following year he and Venturi finished twelfth in the event.

He returned to contest the Mille Miglia in 1950 though he and Bianchi retired their 6C 3000 C50 but driving an Alfa Romeo Sperimentale he won the Coppa Inter-Europa. He had a Grand Prix start though retired his Alfa 158 from the Italian GP but was a regular in the line-up for 1951. Racing Alfa’s 159 he finished fourth in the opening round at Bremgarten in Switzerland, behind Fangio, Tariff and Farina, though retired from the Belgian GP at Spa, but took sixth at Silverstone.

He was classed tenth in the French GP but this was after he pushed the heavy car from Thillois, over a mile and uphill, and apparently he received a bigger cheer than Fangio, who won the race. The Alfa mechanics could only stand by and encourage him plus make sure nobody touched the car which would have meant disqualification. Unfortunately during the year Consalvo was burnt while practising a fuel stop at Monza and after being pulled clear by a mechanic, the car remained ablaze for over half and hour.

Alfa Romeo withdrew from F1 at the end of the season and so ended his F1 racing but he continued to race in sports cars. He finished eighteenth in 1952’s Mille Miglia, with Griffini, in an Alfa 1900 while 1953 saw him and Carini retire their 6C 3000 CM from Le Mans.

However, a brighter moment came when he finished second in the Coppa Inter-Europa with a 1900. For that year’s Spa 24 Hours, Alfa Romeo took two cars to Belgium, which went into different classes at the start. Consalvo was teamed with Juan Manuel Fangio in a 6C 3000 CM in the sports car category though they retired after only 22 laps due to an accident. During the Mille Miglia he actually posted the fastest stage average speed, 112.8 mph (181.5 km/h), beating Nino Farina and Juan Manuel Fangio, though eventually his car failed and he had to retire.

He and Cagna entered the following year’s Mille Miglia plus teamed for the Carrera Panamericana with an Alfa 1900 Ti. At one point he was leading, with a total time of 8 hours, 29 minutes, and 24 seconds though was overtaken by fellow Alfa Romeo drivers, Sergio Mantovani and Mario Della Faver. However, several days later he established a 17-minute lead and Alfa Romeo went on to take the first five positions of the European touring car division and he was a class winner.

Returning to contest the Coppa Inter-Europa, he repeated his previous year’s result by finishing second again though he was unfortunately injured after crashing an Alfa Romeo Disco Volante in testing later that year. He returned to competition in 1955, taking second place in the Verminico hill-climb with a 1.9 Alfa while in 1956 he contested the Giro di Sicilia and the Mille Miglia with a Giulietta Spider though retired from them.

In 1961, although he and Zagato retired from the Coppa Ascari they went on to finish second with their Giulietta Sprint Zagato in the Coppa Inter-Europa and Consalvo himself was second in the GT GP Monza. 1961 also saw him involved in a challenge race between a Giulietta Spider and the new, fast, electric Milan-Rome Settebello train. The car won and reached Rome ahead of the train, despite several setbacks on the way, including punctures, refuelling and having to use a twisty Via Cassia road, as the motorway finished at Florence. Consalvo even did handbrake turns on the journey but the train did it in six hours, thirty seven minutes while the car completed it in five hours, fifty nine minutes.

He continued racing sports and touring cars into the mid-1960s and had a fifth place finish in 1963 with a Giulia TZ in a Coppa F.I.S.A race at Monza. But he gave up racing following a major accident while racing for Scuderia Sant Ambroeus (with Roberto Bussinello) during 1964’s Sebring 12 Hours. His Giulia TZ was hit by a Cobra driven by Bob Johnson (who was sharing with Dan Gurney).

The Cobra rolled three times and was wrecked though Johnson was fortunately shaken and not seriously injured but the Alfa was launched into the wall and engulfed in flames. Consalvo was trapped inside and it was only the courageous actions of fellow driver Jocko Maggiocommo that saved his life when he ran from the pits and dived into the flames to pull him from the blazing car.

He remained in hospital for three months and eventually returned to Italy and retired from racing. Jocko, who was the proprietor of Jocko's Speed Shop in Poughkeepsie, New York, received a Gentleman of the Road award that year from the Milan Automobile Club for his bravery.

On This Day Alfa Romeo