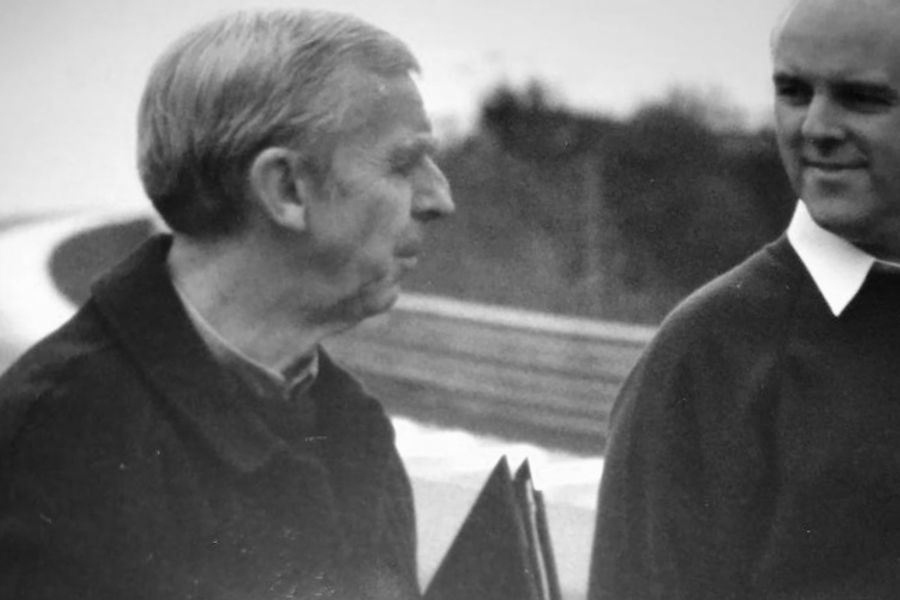 They say you should never meet your heroes and that you will always be disappointed. If that is true then Tony Brooks is a resounding exception.

Unbeknown to him at the time, Tony was the catalyst that began my lifelong love of all things motor racing. My family lived near Chester in England’s northwest and our local race circuit was Oulton Park. It is still very much an active circuit and has changed little in the intervening decades but on 28th June 1958 the rolling Cheshire parkland was assaulted by two pre-war Mercedes Grand Prix cars, a 1937 W125 and a 1939 W163. They were accompanied by the crowd pleasing Mercedes Renntransporter ‘the fastest racing car transporter in the world’. Standing at Lodge Corner, with the rest of my family, a six year old me was transfixed by the sheer noise and spectacle of these leviathans.  I clearly remember it still.

Many years later I had the chance to explain to Tony Brooks that he carried this heavy weight of responsibility for my motor sport addiction. Typical of the man, he made very little of it, casually mentioning that on the high speed run from the hairpin up to Knickerbrook the car kept spinning its wheels…… in top gear. “I recall it was a bit of a handful” was as descriptive as the tale got.

Tony Brooks is often described as ‘under rated’, which is untrue. Anyone who knows anything about 1950s and 1960s motorsport is aware of the towering talent he had. What he was though, was uncelebrated.  Motor racing in general has always had its high profile characters, many of whom positively enjoyed the limelight. You can trace this back to Tazio Nuvolari and even further. In Brooks’ day Moss, Hawthorn and Collins were the well-known British daredevils.  But Tony Brooks was not one of them for the man in the street.
This very modest man is actually Charles Anthony Standish Brooks, but rather than use the full family name of Standish Brooks he chose to be known as Tony Brooks throughout his career.

It is by now the stuff of legend that he was studying for his dentistry final exam when he got the call to drive a Connaught in the non-championship Syracuse Grand Prix in October 1955. But this was far from an immersion in the jet-set lifestyle of a whizzkid racing driver; the journey took three different aeroplanes to get from the UK to Sicily and took eight hours. Of course he won the race and then flew home to sit his exam the following week. He had completed his first international Grand Prix just three years after his first race. It was the first Grand Prix to be won by a British car since Sir Henry Segrave's victory at San Sebastian 31 years earlier.

It was Alain Prost who became known by the nickname ‘The Professor’ but the term could equally have been given Tony Brooks three decades earlier. His driving style was economical, he once said that sawing away at the wheel, even in a four wheel drift so prevalent at the time, simply wasted the energy of both the car and the driver, and hence just made you slower.

1956 saw Tony race for BRM, which was a huge mistake with hindsight. After the British non-championship Formula One races (remember those?) his first ‘proper’ championship Grand Prix was to be at Silverstone. Having experienced throttle linkage problems early in the race he stopped out on the circuit and jury-rigged the broken part. He made it back to the pits and the linkage was repaired but running through the very fast left hander at Abbey, the throttle stayed wide open.  Brooks was thrown from the summersaulting car and was hospitalised with a broken jaw and leg injuries.

Amazingly, in spite of his burgeoning career which by now included sports cars for Aston Martin as well as his single seater work, he continued to study for a career in dentistry.  A ‘proper’ job.

For 1957 he had two ‘proper jobs’, driving in Grands Prix for Vanwall and in sports cars for Aston Martin.  The two team owners were, by co-incidence, very similar characters; Tony Vandervell had built up his Vandervell Bearings business which saw his products fitted to most of the output of the then-vibrant British car industry, and David Brown who made gearboxes and industrial equipment. Both were ambitious, highly driven, self-made men, hungry for success and recognition and uncompromisingly unwilling to hear passages from the ‘racing driver’s book of excuses’. That they each saw an unequivocal winner in Tony Brooks says much for his reputation.

But 1957 also saw Tony’s first bad accident; notwithstanding the severe shaking up he had had at Silverstone in the BRM the previous year. It was at Le Mans and he was driving the early incarnation of the Aston Martin DBR1, co-driving with Noel Cunningham Reid. Noel brought the car into the pits complaining that the car was stuck in fourth (top) gear. It is ironic that, bearing in mind the business of David Brown’s company, the gearboxes in the DBR1 were…. difficult. Brooks took the newly refuelled car out onto the circuit and immediately started trying to free the stuck ‘box. The first decent run was from the Esses through to Tertre Rouge and all through there he was on-off-on-off the throttle to try to release the box to no avail. He looked down into the cockpit to try to see if there was a visible problem and by the time he looked up again he was past his braking point.

Tertre Rouge was a very different corner from the one it is now. It was narrower and much tighter, more like the modern day Arnage, and had a large sandbank on the outside exit of the bend. Brooks went into the sandbank sideways and the Aston, still travelling quickly, turned upside down, complete with its fuel load. There were no roll bars or driver protection aids and (thankfully as it turned out no seat belts) in those days and so Brooks was trapped within the driver/passenger compartment of the car, upside down. Umberto Maglioli’s Porsche had a ‘moment’ at the same place just a minute later and knocked the car further over and Brooks scrabbled free. Contemporary reports said that he had superficial injuries but he explained to me many years later that he had a hole in his leg that you could put a fist into and was covered in abrasions. Thankfully there was no fire.

After a stay in hospital he went straight from the ward to Aintree for the British Grand Prix. In spite of his injury and pain he qualified on the front row of the grid, 0.2 seconds slower than team mate Moss, but knowing that, whilst still blindingly fast, he was unlikely to have the stamina to finish the race which would be fractionally over three hours long. Moss’s car developed a misfire and, as planned, he took over Brooks’ car (as you were allowed to in those days). Thus Moss and Brooks became the first Brits to win the British Grand Prix in a British car.

1958 was perhaps Mr Standish Brook’s greatest year. Continuing to drive for Vanwall he won the Belgian, German and Italian Grands Prix. Indeed he judges the triumph at the Nurburgring as perhaps his greatest drive although this sensitive man would always remind you that Peter Collins died when his car went off the road at Pflanzgarten whilst in second place, vainly pursuing the Vanwall, taking any joy from the victory.

The bombshell came at the end of 1958. Vanwall would not be competing in 1959. Brooks’ reputation was now at the very highest and he was summoned to Maranello for a meeting with Il Commendatore.  After a short meeting a deal was done and F1 and sports cars were all included. Amazingly Enzo Ferrari agreed that Le Mans could be excluded. Knowing how important Les vingt quatre heures’ are to Ferrari this may show the esteem in which he was held.

This was to be the swansong season for front engine Grand Prix cars, the garagiste Lotus and Cooper upstarts were starting to make their presence felt. Nonetheless our hero won at Reims to add the French Grand Prix to his tally. The German Grand Prix went from the majesty of the Nordschleife to the somewhat less impressive AVUS track but Tony won here too, another ultra-fast circuit.

It was at one such super-quick circuit, that I spent some time with Tony Brooks, talking about his career and much, much more. It’s over a decade ago now, but the words ring true in my head as clearly as ever.

We took the opportunity to travel the whole of the ‘old’ Spa, stopping at particular points of interest. Just to add yet more spice, he carried with him his notes from the 1957 Belgian Grand Prix, which that year was for sports cars. He quietly mentions in passing that he won it in an Aston Martin DBR1.

We start at Eau Rouge, where Tony notes that the stone bridge parapet the cars used to brush, on the left hand side at the bottom of the hill, has gone. Does he regret circuits getting safer? “We used to lose a lot of friends in those days, but they were different times”, he says. “It is all about entertainment rather than sport nowadays, which I think is a shame. Call it Formula One by all means, but it isn’t Grand Prix racing is it?”. Where the modern circuit turns right at the top of the hill, the old Spa Francorchamps carries on and then starts the downhill plunge towards Stavelot village. out comes the book, we look at gearing and revs, through Burnenville pretty well flat in the Aston, “how fast would that be Tony?”. “I suppose about 165mph, but we used to have a little confidence lift for the Masta Kink” is the reply, delivered as deadpan as if he were telling me time of the next train.  “We did it quite a bit faster in the Vanwall the following year…..”

Tony Brooks was in the wrong place at the wrong time in 1960, doing a year racing for Yeoman Credit in the previous year’s Coopers.  The world was moving fast and year old cars were hopelessly outclassed. 1961 saw a return to BRM.  All the signs were right but, as it turned out, he was a year too early. And as he says in his excellent autobiography Poetry in Motion he didn’t care for the politics either. He retired at the end of the year.

Tony Brooks built a very strong garage business adjacent to Brooklands and just up the road from his then-current Weybridge home. This became a very successful Ford dealership, uncharacteristically with his name over the door.

When I reminded him that he was responsible for my motor racing passion he replied as only he could.  “It was a fun day wasn’t it?”.