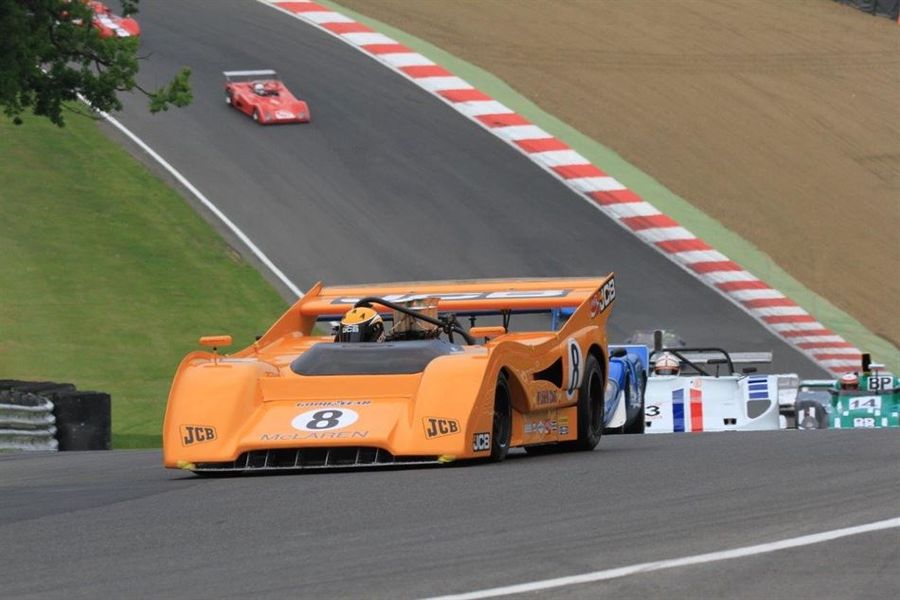 Andy Newall was the man to beat in his McLaren M8F as he stormed to two dominant wins at Brands Hatch at the weekend. Newall (McLaren M8F) led the opener from pole position ahead of Frank Bradley’s March 717 and Mike Donovan’s Lola T70Mk3B but there was drama as Michele Liguori (Lola T296) was held at the end of the pit lane for a late arrival and obliged to start from the pit lane. By the end of the first lap, Newall’s McLaren held a convincing lead and Richard Piper (March 75S) had nabbed fourth place with the fired-up Liguori having already fought his way up to 10th place from 15th.By lap six, Piper and the resurgent Liguori were catching Donovan and Marc Devis (Toj) in third and fourth but unfortunately the TOJ pulled off without power. After then, Liguori pressed the point but traffic played a part and Richard Piper held third place for the Inter B win, behind the victorious Andrew Newall and Frank Bradley at the flag. Jonathan Loader took Inter A honours in sixth place, 1.5 seconds ahead of Martin O’Connell (Chevron B8).The second race was led away by Newall, with Bradley and Piper up behind him, but Marc Devis made a lightning start from the last row of the grid to leap to fifth by the end of the opening tour. It was close for first for the opening five laps, with Bradley remaining less than a second behind Newall, as Devis made up places all the time, passing Liguori and Piper into third. Paul Gibson, starting from the back in his Lola T70 Mk3B, passed Martin O’Connell for sixth as Liguori passed Piper for fourth. Bradley lost his second place, though, after an excursion at Stirlings which removed the front bodywork of the March and forced a pit stop elevating Devis to second place.For a few laps it looked as though Devis was going to catch Newall but ace preparer Newall stormed clear again. Attention switched to the epic battle for third place between Richard Piper and Michele Liguori’s Lola T296. Lap after lap, the Lola had the edge but, on the final tour, a brave squeeze up the inside at Surtees put Richard Piper into third place behind Newall, celebrating a welcome double win, and the charging Devis in second. Jonathan Loader passed Martin O’Connell for sixth place and class lead but O’Connell stayed in touch, never more than a few seconds behind.