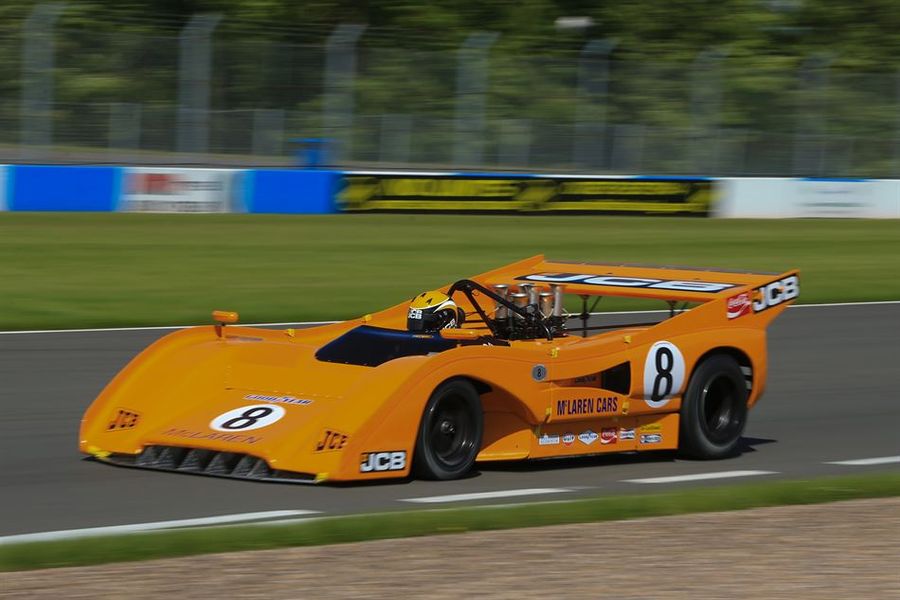 Andy Newall was in dominant form at Donington Park at the weekend as he won both Masters Allcomers/CanAm Interserie Challenge races aboard his mighty McLaren M8F.
Newall dominated the opener, chased by John Grant (McLaren M8C/D) with Mike Donovan (Lola T70 Mk3B) moving into third past Frank Bradley (March 717).
Behind the flying Newall, a great battle raged between Donovan and Bradley but Frank brought the March into the pits with front damage on lap 10. Grant retired, too,  suspecting some handling problems, leaving Newall to win, with Mike Donovan (Can Am B) second and Paul Gibson third. Fourth and leading Inter A was Jonathan Loader in his Chevron B19.
Newall took the lead at the start of race two from Donovan, John Grant passing the Lola as the second lap began to make it a McLaren 1-2, having already disposed of Paul Gibson. Donovan and Gibson ran together in their all-Lola battle for third, with Frank Bradley splitting them in fourth place by lap four.
The leader was setting a string of fastest laps to put himself 6.5-seconds ahead of John Grant, but Frank Bradley eased past Mike Donovan into third place at Redgate at the start of lap six, then began to work on the seven-second deficit to Grant.
By lap 12, the March had closed to less than a second from the McLaren. Bradley lunged down the inside as the pair headed into Melbourne Hairpin for the final time, Grant fighting back through Goddards and the McLaren fishtailing as the pair headed to the line, Bradley taking second place by one-tenth of a second, behind the victorious Andy Newall.
The CanAm field will be back on track at the Silverstone Classic on July 29-31.
McLaren M8F Donington Park Masters Allcomers/CanAm Interserie Challenge Andy Newall