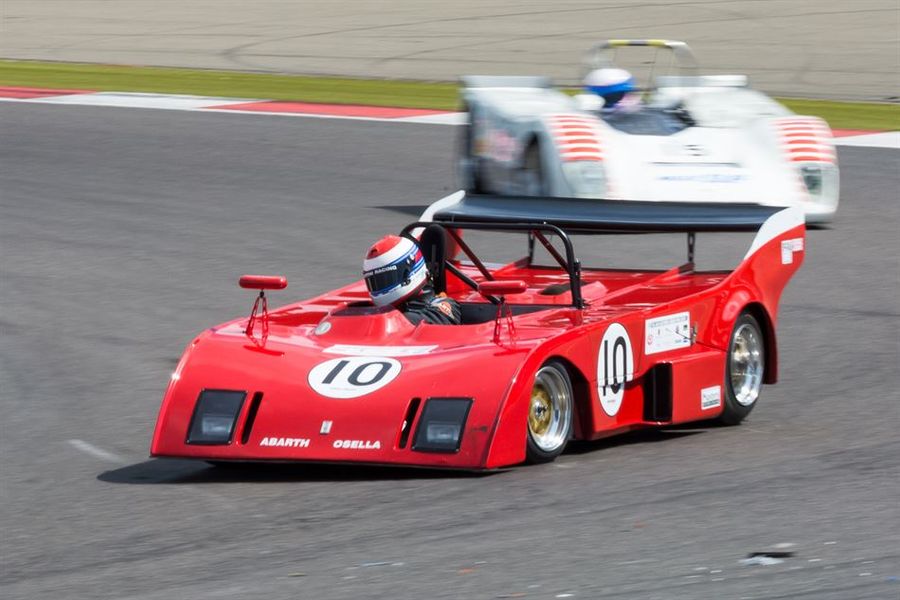 Manfredo Rossi di Montelera gave his Osella-Abarth PA1 its maiden win in the FIA Masters Historic Sports Car Championship by winning the Oldtimer Grand Prix round at the Nürburgring.
The Italian narrowly held off the Lola T70 Mk3Bs of Jason Wright and Mike Donovan despite his car developing brake problems towards the end. In the Hulme class, Keith Ahlers and Billy Bellinger’s life in the Cooper Monaco ‘King Cobra’ was made easier when class rivals Chris Drake/Michael Lyons fell back because of temperature problems and a stop-and-go penalty for their McLaren M1C.
Rossi grabbed the lead just after the mid-way point by passing Max Smith-Hilliard (Chevron B19) that the Brit had just taken over from Nick Padmore. Pole man Padmore had done the early running in the Chevron but Rossi hung on while fighting with Mark Piercy (Lola T210). Padmore’s gap to Rossi in the Osella was never more than 15 seconds.
The field was bunched up when the safety car came out with 35-minutes still on the clock, as Toni Seiler had beached his Lola T70 Mk3B at the hairpin. The safety car period neatly coincided with the entire pit window, creating lots of action in a very busy pit lane.
At the green flag, Rossi passed Smith-Hilliard, the Chevron driver dropping back before coming in five laps later, reporting gear-change issues. This meant that Rossi now controlled a 10-second gap to Mike Donovan’s Lola T70 Mk3B. Donovan, however, soon had Jason Wright breathing down his neck. The American was on a charge, having passed German Markus Jörg (Daren Mk3) and Swiss Felix Haas (Lola T210) for third. On lap 25, Wright also dealt with Donovan to take second place.
At half-distance, two of Rossi’s potential challengers for the win had already faded. Suffering from fuel pump problems, the Mark Piercy/Martin Stretton Lola T210 lost huge chunks of time on its out lap, which meant that Stretton wasn’t allowed to capitalise on Piercy’s excellent first stint. Michael Gans was in trouble on lap six, with front damage to his Lola T290.
Towards the end, Rossi was losing time with brake issues, which allowed Wright to close within three seconds. This gave the Italian such a scare that he gave his everything to salvage the win. Unsurprisingly, Rossi was elated.
“This is the first win for the Osella since we got it,” he said. “And in its first outing of the year! In the early laps I had a great battle with Mark Piercy, who was really on the pace. I did have a lot of stress at the end when I began suffering from brake issues. But it’s great that we did it!”
“It was a fun race”, said Wright. “I really enjoyed it. I love this car, and I like this track and it showed!”
Donovan was less happy. “Right from the start, the car had a misfire below 6000 revs. This meant that I always had to keep it a gear lower, but then I would constantly hit the rev limiter. The safety car helped me, as it got me ahead of Jason in the pit stop confusion, but Jason really deserves the class win.”
While Jörg and Haas took second and third in the leading Marko class (and fourth and fifth overall), Wright and Donovan led the Rodriguez class, with Paul Gibson in another Lola T70 Mk3B in third (and sixth overall). Local man Johannes Offergeld (Lola T212) took seventh despite a stop-and-go penalty.
In eighth overall, Graham Wilson/Nigel Greensall easily won the Chevron B8 battle in the Bonnier class after their rivals Greg Thornton and Andrew Owen/Mark Owen each took turns in the lead. The Owen family’s challenge was blunted by a stop-and-go penalty for a pit stop that was too short, while Thornton’s B8 retired with brake problems.
Nicky Pastorelli (10th overall) had an easy time of it in the Pescarolo class, his Ferrari 365 GTB/4 well ahead of Bruce White’s Porsche 911, which was thrown back even further by a drive-through penalty for avoidable contact.
The battle for Siffert honours proved to be hugely entertaining, as Rolf Lamberty and Jamie Boot were never far apart in their Chevron B16s. Lamberty led the class before Boot got ahead after the stops. The Briton looked certain for the win but Lamberty closed the gap lap after lap to pinch victory from Boot’s hands on the final lap.
Keith Ahlers and Billy Bellinger won the Hulme class when an entertaining battle with the Chris Drake/Michael Lyons McLaren M1B came to a premature end on lap 12. Suffering from temperature problems, Drake quickly dropped down the order before coming in to have the problem fixed. Impromptu second driver Michael Lyons (called in as Drake had to dash for a flight!) was thrown back even further when he had to take a stop-and-go penalty for crossing the pit lane exit line.
“Before the McLaren’s first problem we were two seconds apart”, said Keith Ahlers. “Their two issues together gave us a comfortable lead.”
The FIA Masters Historic Sports Car Championship is in action next at Zandvoort on September 2-4.
Oldtimer Grand Prix Jason Wright Osella-Abarth PA1 FIA Masters Historic Sports Car Championship Manfredo Rossi di Montelera Mike Donovan Nürburgring Lola T70 Mk3B