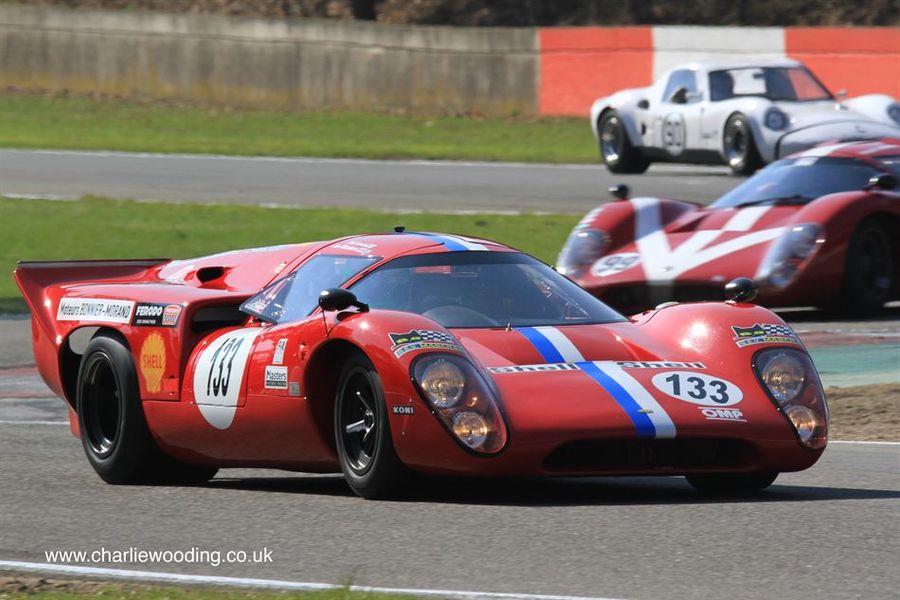 In a race of attrition among the leading Lolas, Jon Minshaw and Phil Keen dominated at Zolder yesterday to win the season-opening FIA Masters Historic Sports Car race. Mike Donovan and Jason Wright took second and third in the two surviving T70 Mk3Bs.
At the start, Minshaw leapt ahead from the outside of the front row, beating Leo Voyazides into the first corner, while Chris Beighton (Lola T70 Mk3B) did likewise to David Hart (lola T70 Mk3B) from the outside of the second row. Hart quickly got the place back but Minshaw kept in front, with Voyazides and Hart at close quarters. On lap four, the three were separated by less than a second.
On lap six, Hart outbraked Voyazides into the first corner but had to give the place back one lap later. One more lap and the Dutchman was into the pits with brake failure. He would be the first retirement of the race.
In the meantime, Minshaw had eked out a small lead but this would soon grow out to seven seconds over Beighton, instead of Voyazides, when the Greek driver suddenly fell back and entered the pits on lap 12. One lap earlier, Paul Gibson’s was another Lola T70 Mk3B to come into the pits for a lengthy stop. He came back in on lap 20 to retire with a misfiring engine. Meanwhile, on lap 15, Voyazides was in and out again before eventually retiring with a fuel-pressure issue.
All this meant that Minshaw led Beighton by between four and eight seconds, depending on traffic, followed by Mike Donovan’s T70, trailing by half a minute, and Jason Wright in another T70, now down by a minute.
Minshaw was the first to come in for a driver change, handing the red T70 to Phil Keen, who on his first full lap out underlined his pace by improving the fastest lap of the race by a massive two seconds. Beighton made his compulsory stop one lap later in a pit lane suddenly swarming with cars. Meanwhile, Minshaw was relieved that his fiercest competition had taken care of itself, since his hand-operated clutch had been giving him quite some trouble.
Over the course of his stint, Keen extended his lead to a mighty 1m 42 secs and comfortably took victory over Mike Donovan, who inherited second after Chris Beighton stopped out on the circuit with two laps to go. As with the Voyazides car, fuel pressure was determined as the problem. Beighton’s heartbreak meant that Jason Wright took the final place on the rostrum, the American finishing one lap down and making up the rear of the surviving T70s. Beighton was eventually classified eighth. Marc Devis, in an invitational T70 Spyder, also dropped back in the later stages, having run as high as fifth. He was classified 13th.
In his Chevron B19, Jonathan Loader held the Marko class lead from the start, initially running eighth and progressing to fifth at the stops, as the first of the non-T70 runners. However, it all changed as soon as Scott Mansell began setting overall fastest laps in the Lola T210 he took over from Nick Pink. Within a handful of laps, Mansell (a former outright Zolder lap record holder) was past and ran away to finish fourth overall.
The same story applied to the Chevron B8s in the Bonnier class. The Andrew Owen/Mark Owen machine did the early running, but Nigel Greensall quickly closed on the class leaders after taking over from Graham Wilson. Greensall brought the car home in sixth overall while hunting down Jonathan Loader in fifth. The Owen/Owen B8 finished ninth.
Chris Jolly and Steve Farthing simply had to drive their Cooper Monaco home when the Ahlers/Bellinger Monaco ‘King Cobra’ fell by the wayside with a broken rose joint, Bellinger at the wheel for the opening stint. João Paulo Campos Costa’s Lotus 30 finished a lap down on Jolly/Farthing, in 12th overall.
Similarly, Jamie Boot (Chevron B16) had an easy time of it in the Siffert class after Nikolaus Ditting’s example lost time with an unscheduled pit stop on lap. Boot finished seventh overall, Ditting was the last of the runners in 14th.
Peter Hallford’s Chevrolet Corvette was the lone starter in the Pescarolo class and finished 11th overall.
The FIA Masters Historic Sports Car Championship moves next to Brands Hatch on May 28/29.
Phil Keen FIA Masters Historic Sports Car Jason Wright Lolas Jon Minshaw T70 Mk3B Mike Donovan Zolder