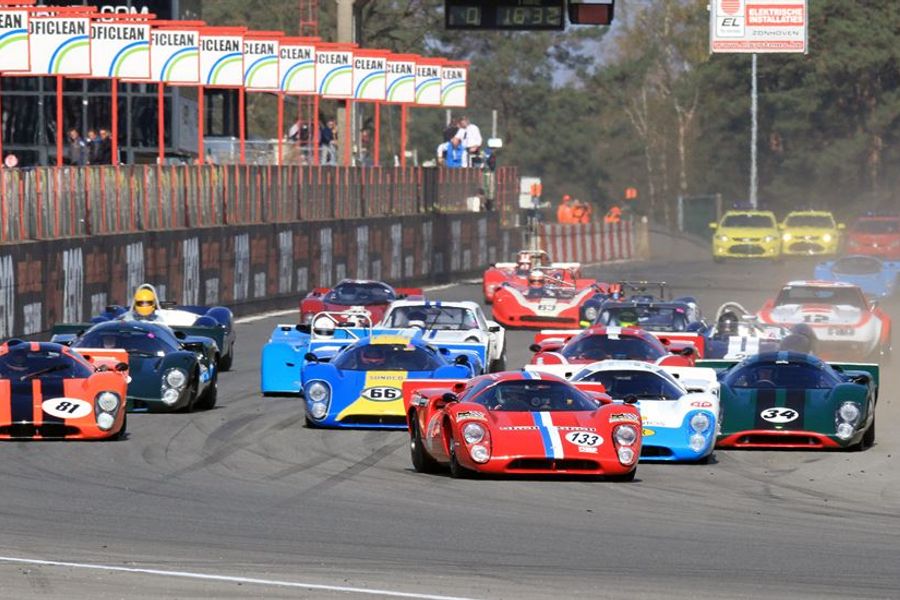 The FIA Masters Historic Sports Car Championship is set to thrill fans at the Silverstone Classic (July 29th to the 31st) with a bumper entry and the prospect of a fabulous 50-minute race. With pit stops, driver changes and a class structure that promotes battles all through the field, a superb spectacle is in prospect with an entry boasting Lolas, Chevrons, McLarens and Ferraris, plus a wealth of different shapes and sizes!
The British-built Lola T70 Mk3B heads the entry, with Jason Wright sharing his example with ace preparer/driver Andy Wolfe, while Greek ace Leo Voyazides shares his with another star preparer/driver, Simon Hadfield. World Touring Car Champion Rob Huff shares Richard Meins’s example, while father and son Grahame and Olly Bryant will be pace-setters as well. Two more stars of the historic racing scene, Gary Pearson and Andrew Smith, team up in a T70, while Grant Tromans and rapid journalist/racer Richard Meaden will be competitive, too. Shaun Lynn, father of GP2 race winner Alex, and Clubmans champion Paul Gibson, partnered by former FF1600 champion Chris Ward, will be pitching for a race win as well.
Against the ground-shaking T70s comes a stream of little Lolas, the T210 and the T290s. Brands Hatch winners Mark Piercey and Martin Stretton team up in a T210 with Stretton also sharing Diogo Ferrao’s T292, while Nick Pink and Scott Mansell share another quick 2-litre terrier.
There will be fierce competition from the Chevron pack as well, with Martin O’Connell (B19) taking on the similar cars of Max Smith-Hilliard/Nick Padmore and father and son Mike and Matthew Wrigley. Greg Thornton’s B8 takes on the similar car of Andrew and Mark Owen and Sandy Watson.
In a grid of variety, Rob Hall handles Abba Kogan’s Matra MS650 and Alexander Rittweger brings his glorious Ferrari 365GTB/4. Ford GT40s add to the spectacle in the hands of David Forsbrey/Andy Newall and Kennet Persson, while Keith Martin’s Dulon Dino LD10B and Paul Pochiol’s De Tomaso Pantera bring extra variety.
Add in GT racer Luke Davenport aboard a Lotus 19 Monte Carlo, Keith Ahlers/Billy Bellinger in the spectacular Cooper Monaco and Roderick Smith’s McLaren M1B and there will be a great race in store.
Masters President Ron Maydon said: “I think this is always one of the most spectacular grids at the Silverstone Classic. With a grid of charismatic cars and some of the best drivers in historic motor sport, this should be one of the best races of the weekend. This grid showcases some of the finest constructors of pre-9174 sports cars and recreates some of the fabulous battles of the time. We can’t wait!”
The FIA Masters Historic Sports Car Championship field qualifies at 19:35 on Friday July 29 and races at 17:35 on Saturday July 30 as part of a great weekend of historic race action.
Chevrons McLarens FIA Masters Historic Sports Car Championship Silverstone Classic Lolas Ferraris