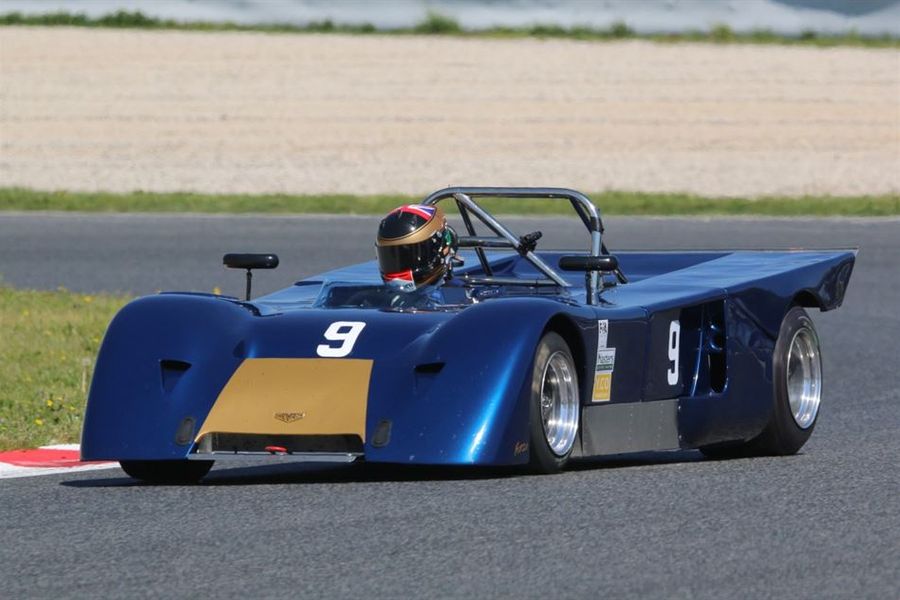 The FIA Masters Historic Sports Cars season opener at Barcelona at the weekend saw a fascinating six-car lead battle – reduced to five when Jason Wright was hit by a penalty for pitlane speeding – from which Max Smith-Hilliard and Nick Padmore emerged victorious. In their Chevron B19, Smith-Hilliard kept with the leaders during his opening stint after which Padmore stormed to the front and opened up a ten-second gap at the finish line.
He was followed home by Michael Gans (Lola T290), who got past early leader David Hart (Lola T70 Mk3B) but only through contact. The ensuing drive through penalty forced him to fight his way back past the T70s of Nicky Pastorelli (who had taken over from Hart), Mike Donovan and Paul Gibson, who were all involved in a hugely entertaining lead battle after the pitstops. In the end, Pastorelli recovered from a spin to claim third ahead of Gibson and Donovan.
“It was just damage limitation, really,” said Smith-Hilliard.
“Max did me a right favour”, Padmore said. “It was absolutely perfect. And that five-car battle was awesome. I couldn’t see a thing – I had those Lola exhaust flames right in my face!
“He just hit me!”, said an angry Hart about the contact with Gans, who then set about discussing the move with the German.
“I never did it on purpose”, Gans explained. “you see, in a T70 they don’t see you, they don’t know where you are. So the only way to do it is just put the car next to them. I’m not sure if I could have won if I hadn’t had the drive through. Maybe if I had had built up a 20-second lead to Max, but that wasn’t the case. I did enjoy that five-car battle, though!
“
“There was oil in turn five and I spun”, said Pastorelli. “That meant I had to do all over again!”
The first half of the race was dominated by the perennial tussle between David Hart and Michael Gans. A quick starter as usual, Hart moved to the front in the opening laps to open up a four-second gap to Mike Donovan’s similar Lola T70 Mk3B, before Gans passed Max Smith-Hilliard in the Chevron B19 on lap three and then Donovan two laps later to slowly reel in his Dutch nemesis. On lap 10, the German got his open-top Lola T290 past but there was contact involved, for which Gans would be penalized. He served his penalty shortly before the pit window opening.
This gave Donovan a brief lead since he had passed Hart who was dropping back after the incident with Gans. Meanwile, Paul Gibson’s T70 Mk3B had moved past Smith-Hilliard for fourth. They were followed by Jason Wright’s T70 Mk3B and Phil Hall who was having a lonely race in his Lola T212. In Hall’s wake a huge gap opened up to Mark Owen in the first of the Chevron B8s.
This all changed after the pitstops, when Jason Wright found himself in the lead, followed by Gibson, Donovan, Nicky Pastorelli (in Hart’s Lola), Nick Padmore (in Smith-Hilliard’s B19) – all covered by four seconds, with Gans a further three seconds adrift. Wright was soon taken out of the equation, however, after he was obliged to serve a drive through penalty for speeding in the pitlane.
On lap 20, the remaining five-car battle was even more finely poised, just 2.3 seconds separating fifth-placed Michael Gans from new leader Paul Gibson, the two sandwiching Padmore, Donovan and Pastorelli. The nimble open-top Lolas would soon be moving up the order, though. One lap later, having set fastest laps in a row, Padmore grabbed the lead while on lap 22, Gans moved up from fifth to third, and then to second on lap 25. By then, though, Padmore was eight seconds up the road and controlling a comfortable cushion. He further increased this to ten seconds at the line. Meanwhile, Pastorelli recovered from a spin to steal third place from Paul Gibson.
Reigning champions Keith Ahlers and Billy Bellinger had a trouble-free run to Hulme class honours, their Cooper Monaco King Cobra beating both Laurie Mitchell’s McLaren M1B and the Folch/Hadfield GT40. The latter pair’s progress was hampered by an additional pitstop.
“It was a pretty decent race”, said Bellinger. “we had it under control but you never know when Simon [Hadfield] comes up with a storming drive. Their problems made our lives much easier.”
Mark Owen led Graham Wilson in the Chevron B8 battle but with Andy Wolfe in Wilson’s car the Bonnier class tide soon turned towards the Wilson/Wolfe machine. When Andrew Owen got penalised for crossing the white line on pitlane exit the fight was all but over. The Owens’ car later retired from the race.
The Pescarolo class proved easy pickings for the Paul Pochciol/Paul Hanson De Tomaso Pantera. They led home Colin Paton’s Porsche 911 RSR, while the Aaron Head/Dale Head RSR was an early retirement.