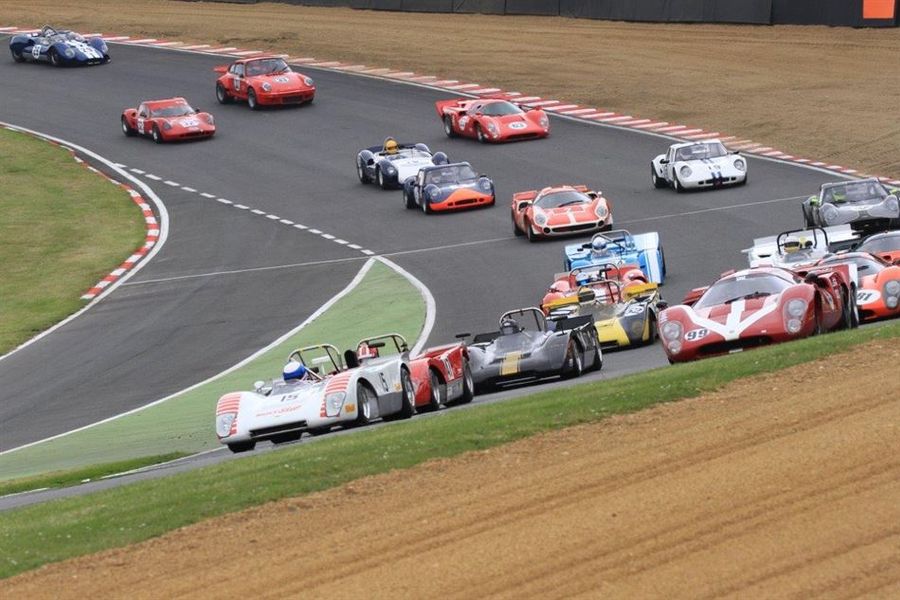 A fantastic drive by Martin Stretton was the highlight of a dramatic FIA Masters Historic Sports Car Championship one-hour race at Brands Hatch at the Bank Holiday weekend, as he guided Mark Piercey’s Lola T210 to a narrow last-gasp victory. Mark Piercy started his Lola T210 with the Paul Gibson (Lola T70 Mk3B) alongside, followed by Nick Pink (Lola T210) and Carlos Monteverde (Lola T70 Mk3B), but Greg Thornton’s woes continued as he pulled his Chevron B8 into the pits at the end of the formation lap, only to rejoin at the back of the field after the start. Piercy held the advantage at Paddock Hill, with Phil Hall (Lola T212) making progress behind him. Chris Beighton (Lola T70 Mk3B) hit trouble, dropping to 23rd on lap two, but but the car picked up pace again and pressed back up through the field, up to 13th by lap six. A misfire for Gibson dropped him away from the raging lead battle of Piercy and Hall, which was down to under a second by lap nine. By lap 10, Chris Beighton was back into 10th, catching the Jason Wright (Lola T70 Mk3B) and Martin O’Connell (Chevron B8) battle, which itself was closing on Carlos Monteverde. At this point the Cooper Monacos of Chris Jolly and Keith Ahlers tangled at Clearways, bringing out the safety car just four minutes ahead of the pit window. The pits opened under the safety car and only Piercy, Gibson and Jonathan Hoad (McLaren M1B) went through as the rest of the field dived for the pits on lap 15. In a congested pitlane, the order shuffled with some cars trapped in their pit slots. Piercy and Gibson pitted the next lap, drag-racing out of the pits with Stretton now taking over Piercey’s T210, leaving Jonathan Hoad in the lead without stopping, as the safety car pulled in.Philip Hall led after the stops were completed, as Simon Hadfield, now on board the Beighton Lola, had a terrific tussle with Robert Oldershaw to take third, albeit 27 seconds behind Hall. Further back in seventh, Martin Stretton was setting fastest laps as he brought the T210 past Scott Mansell, having rejoined the race in 14th after the pit stops. Hadfield relieved Stefano Rosina (McLaren M8C) of second and with 18 minutes to go, Stretton passed Gary Pearson’s T70 to take fourth at Druids.Stretton and Hadfield were running together by lap 27, but an incident at Graham Hill bend put Stretton on the grass. He forced a way past Hadfield and set off after Hall with just 11 minutes to go. Stretton began his chase of Philip Hall, reeling him in at the rate of two seconds per lap to close a 16 second gap with eight minutes to go…Stretton repeatedly set fastest laps and with two laps to go, Stretton was four seconds behind and kept closing, eventually passing Philip Hall around the back of the circuit to lead across the line with one lap to go. Simon Hadfield brought Chris Beighton’s Lola T70 home third ahead of Gary Pearson in fourth and the battling Robert Oldershaw in fifth. Winning the Bonnier class was Martin O’Connell (Chevron B8) and Keith Ahlers/Billy Bellinger (Cooper Monaco) took the Hulme class win.
Brands Hatch Mark Piercey FIA Masters Historic Sports Car Championship Martin Stretton Lola T210