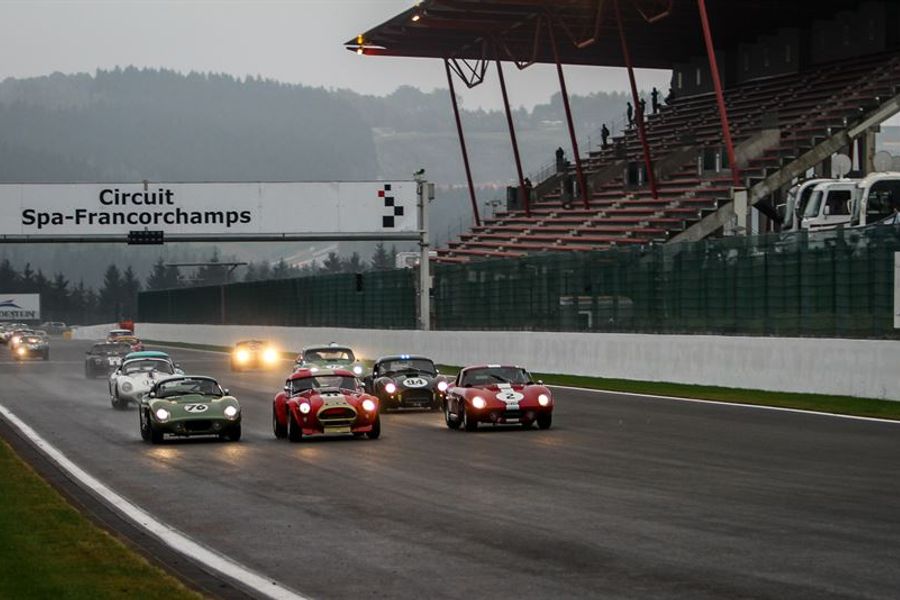 Oliver Bryant beat the father-and-son team of David and Oliver Hart by seven-tenths of a second to win the 90-minute Stena Line Gentlemen Drivers support race at the Spa Six-Hours meeting.
Always quick on cold tyres, David Hart in the Shelby Cobra Daytona Coupé had led the first part of the race, opening up a four-second lead on pole man Bryant’s AC Cobra, right up to a caution period after 33 minutes when Malcolm Paul crashed his TVR Grantura at the daunting Blanchimont corner. With the safety car period extending into the pit window, Bryant took charge when Hart had to pit twice during the pit window, having come in too early the first time. Oliver Hart then kept Bryant on his toes all through his entire stint but gave his rival a breather with a high-speed spin, from which he recovered quickly. In damp, ever-changing conditions, young Hart then closed up the gap to 0.7 seconds at the line.
The deciding moment came when the safety car missed the two leading cars, which were able to drive on at a speed they liked. The lead then changed hands when David Hart pitted ahead of the pit window, while Bryant stayed out for another lap. When Hart realised his mistake, he had lost 29 seconds in the pits. Still very much ahead of the pursuers, led by the Leo Voyazides/Simon Hadfield Shelby Daytona Coupé, which were kept at a slow speed by the safety car, pitting a lap late didn’t hurt either Bryant or the Dutch crew. When the green flag was waved, the two still held a 30-second lead on Simon Hadfield, who was unable to do anything about it and finished a distant third.
“It was very easy to make a mistake out there”, said Bryant. “It was raining at the back, and so tricky. I’m happy that I kept it together.”
“I’ll have to watch my kid”, said David Hart. “It won’t be long before he’s quicker than me!”
“I had a huge moment up on the Raidillon,” Oliver Hart confessed, whose second sector times were always quicker than Bryant’s, before and after he lost six seconds by his spin, “but I reacted very quickly, stuck it in first, put the car straight and on I went!”
“It was very slippery, just no grip”, said Voyazides. “The car was in dry set-up, so it felt like ice-skating! And then we were very unlucky with the safety car…”
The lonely Michael Gans/Andy Wolfe, winners of the Spa Six Hours the previous day, finished fourth in their AC Cobra, over a minute down on Bryant. They were followed home by the Graham Wilson/Nigel Greensall Lotus Elan 26R, which in Greensall’s hands flew again, taking the CLP class lead with 15 minutes to go and nicked fifth overall from the C2-class-winning Keith Ahlers/Billy Bellinger Morgan SLR on the very last lap. The Morgan then dropped to seventh overall when the Rui Macedo Silva/Joaquim Jorge AC Cobra also nipped past on the final lap. Jamie Boot’s TVR Griffith was eighth.
In ninth, and second in the CLP class, came the Mark Martin/Andrew Haddon Lotus Elan, which was handed the place when Ron Maydon’s Ginetta G4R stopped at turn 13 with four minutes still on the clock. Martin and Haddon narrowly headed the Jeremy Cooke/Mike Dowd 26R, which took 10th overall, and ahead of a group of quicker C3 cars that failed to make their pit stop at the first opportunity when the pit window opened under the safety car.
Keith Ahlers/Billy Bellinger were easy C2 class winners, with the similar Morgan SLR of Simon Orebi Gann/Calum Lockie taking second place a long way behind. In the early stages the Nils-Fredrik Nyblaeus/Jeremy Welch Healey 3000 kept Ahlers honest before dropping back with Welch at the wheel. This gave the Chris Clarkson/David Smithies Healey third place in class.
The Steve Monk/Pietro Tognola Porsche 911 was favourite for the C1 class win, especially after Malcolm Paul’s crash at Blanchimont. The Nik Spencer/Brian Johnson MGB was a distant second in class.
The class win for Keith Ahlers/Billy Bellinger was enough to secure the pair the championship crown with one race to go at Jarama on October 14th to the 16th.
Lotus Elan 26R Shelby Cobra Daytona Coupé Chris Clarkson/David Smithies Graham Wilson/Nigel Greensall Jorge AC Cobra CLP class TVR Griffith Rui Macedo Silva/Joaquim Oliver Bryant Malcolm Paul TVR Grantura David Hart Nils-Fredrik Nyblaeus/Jeremy Welch Healey 3000 Morgan SLR Ron Maydon Mark Martin/Andrew Haddon Stena Line Gentlemen Drivers support race at the Spa Six-Hours meeting Steve Monk/Pietro Tognola Simon Orebi Gann/Calum Lockie Oliver Hart Michael Gans/Andy Wolfe Leo Voyazides/Simon Hadfield Keith Ahlers/Billy Bellinger Jeremy Cooke/Mike Dowd Lotus Elan Ginetta G4R Jamie Boot Porsche 911