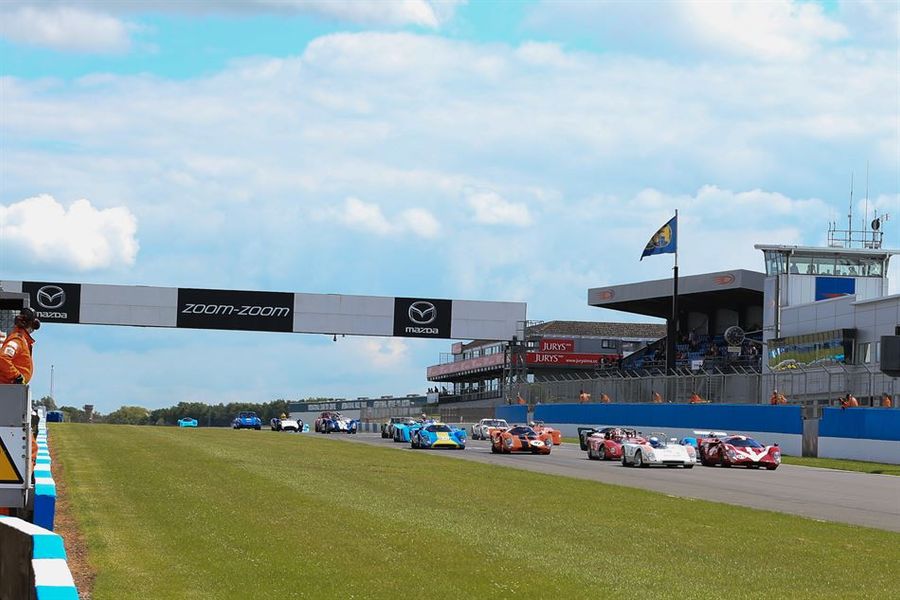 Martin Stretton and Mark Piercey triumphed in a frantic FIA Masters Historic Sports Car Championship one-hour enduro at Donington Park, to take a second win of the season.
Andy Wills (Matra MS650) led into Redgate, but not out of it, as it went too deep and dropped back to third. A collision involving Chris Jolly (Cooper T61) and Mark Bates (Porsche 911 RSR) brought out the safety car immediately so at the end of the first lap, the field was headed by Paul Gibson (Lola T70) ahead of Mark Piercy (Lola T210) and Wills. Robert Oldershaw (Lola T212), who had started at the back of the grid after being excluded from qualifying, was in 12th.
When the race resumed and Oldershaw forged through to seventh, he and Mike Donovan making places past Nick Pink’s Lola T210. Andy Wills had a brief off in the Matra, which dropped him to fifth and Piercy was setting fastest laps to keep Paul Gibson honest in the lead. Behind, four battled for third, Willis attacking Michael Gans (Lola T290) and Oldershaw following him through.
On lap eight, the Matra was back into third with Oldershaw in fourth, both relieving Chris Beighton’s Lola T70 Mk3B of third. Leading the Bonnier class runner at this point was the Mark and Ander Owen Chevron B8 in 12th with Billy Bellinger heading the Hulme class in 13th aboard the Keith Ahlers-owned Cooper-Monaco.
Wills and Oldershaw now set off in pursuit of the leading pair, Oldershaw setting fastest lap and passing Wills for third just as the Matra took to the pits with a problem. This left the leaders – Gibson, Piercy and Oldershaw – covered by just four seconds when Oldershaw asserted himself at the Melbourne Hairpin and bagged second, taking fastest lap in the process. A carbon copy move on the next lap put Oldershaw into the lead, Gibson spinning as he tried to re-pass and Piercy heading for the pits from second to hand over to Martin Stretton.
Michael Gans was now fourth ahead of Chris Beighton as Oldershaw pitted from the lead and the pit stops began in earnest at the half way mark. Gibson and Gans pitted too, putting Chris Beighton into the lead on the road.
The pit window closed with Robert Oldershaw in the lead narrowly ahead of Martin Stretton, with Paul Gibson and Michael Gans in third and fourth. Stretton was now with Oldershaw, the pair running side by side for most of lap 23 in a fascinating lead battle, Stretton leading by lap 24 but Oldershaw staying within two-tenths.
Behind the gripping lead battle, Michael Gans was in third but Gibson copped a penalty for speeding in the pit lane. This elevated Donovan to fourth with Scott Mansell behind in Nick Pink’s Lola. With 12 minutes to run, Stretton was still holding off Oldershaw who remained within around a second until the very final laps when he slowed, but still came through to take a delighted second place on the road, 23 seconds shy of the winning Stretton. However, another technical infringement resulted in Oldershaw being excluded from the results, promoting Michael Gans to second with Mike Donovan taking the Rodriguez win in third. Keith Ahlers/Billy Bellinger won the Hulme class as the first Pre-66 combo home, Mark Owen/Andrew Owen winning the Bonnier scrap and Bruce White’s Porsche took the Pescarolo class.
The FIA Masters Historic Sports Car Championship moves to the Silverstone Classic on July 29-31.
Mark Piercey FIA Masters Historic Sports Car Championship Martin Stretton Donington Park