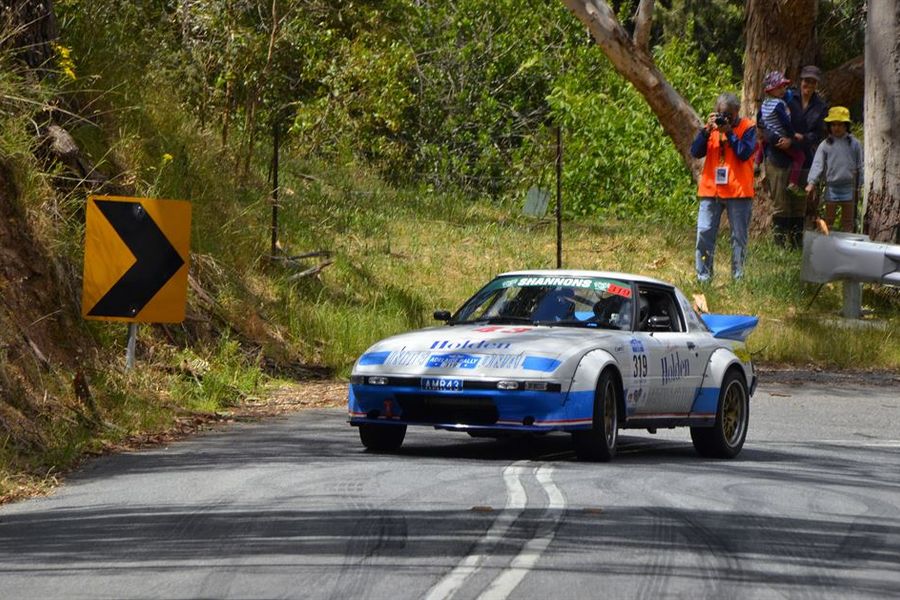 Adam Kaplan and Aleshia Penney have powered home to win the Shannons Adelaide Rally after three highly competitive days of competition in the Adelaide Hills and surrounds. Meanwhile, Rally legends Neal Bates and Coral Taylor powered their Toyota Celica to victory in the Modern Competition class.
Kaplan and Penney, driving a Mazda RX-7 running a tribute livery to Australian motorsport great Allan Moffat, led from the outset and won a majority of the stages en route to a winning margin of 1:14. They beat home the closest fight of the rally – the fight for the final two steps on the podium.
Oscar Matthews and Darren Masters finished second, replicating their result from the 2016 event. They edged out the Matt Selley / Hamish Mckendrick Hartage H35 by just 21.7 seconds following a battle that remained that close throughout the entire event.
Selley had held second place throughout the first day and a half however a remarkable second-half of the Rally saw the flying Toyota overhaul the German thoroughbred for second.
Simon Gunson and Jurgen Lunsmann finished fourth powered their Mk1 Capri to fourth place, less than 20-seconds away from a place on the podium. The Gunson / Lunsmann combination also headed up a team victory for WA inc. David McDonough and Dave Langfield finished fifth in their Ford Capri Perana, a further 30 seconds behind.
In Modern Classic, Rally legends Neal Bates and Coral Taylor ultimately won their tight battle with Ben Calder and Steve Glenney after three days of the pair being almost completely inseparable. Driving his classic ARC-winning Celica, Bates withstood attack after attack from Calder to ultimately edge out a narrow 46-second margin by the end of the final stage.
The Iconic Celica was also the fastest car overall in the rally, their total time of 44:27.8 seconds the fastest of all cars entered.
Against the high-powered Rally Machinery, David Heaton and Caleb Ash secured third in class in their Ford Focus RS while Stuart Bowes and Jeremy Browne (Celica GT4) and Richard Lovell and Bernie Webb (Subaru) completed the top five.
Justin Perkins and Andrein Brabbins (Subaru WRX) scored a 44-second win in Modern Challenge, beating home Linden Reynolds and Tristan Reynolds (Nissan Skyline). Kristian Downing / Clayton Webber finished third in class driving another Subaru.
Rob Ephgrave and Leigh Beeston powered to a commanding 1m50 victory in Classic Challenge, their Porsche 911 leading a majority of the event. They led home a Porsche 911 1-2 in class with Justin Gan and David Hart finishing second.
John Crabb and Arno Visser finished third in their Holden GTS, climbing the order in the later stages to grab a podium finish.
In Category S, Craig Van Diemen and Michael Mohr pushed their Mitsubishi Lancer EVO to victory in Category S, ahead of a recovering Nick Streckeisen and Jeremy Dale in their Nissan GTR.
While he didn’t get a rally victory, Irishman Frank Kelly spent much of the rally sideways and finished third in class William Gill and Cathy Gill won the regularity competition ahead of Matt Bull & Brett Foster, with Ben Auld and Rhys Gillet in third.
Event director Tim Possingham said the expanded 2017 Shannons Adelaide Rally was a success for all concerned: “Over three days we have seen some intensely close competition between more than 280 competitors on some of South Australia’s best roads.
“Thanks go to our partners at Shannons, the Sporting Car Club of South Australia, South Australia Tourism Comission and the City of Adelaide - as well as the major manufacturers who were involved in the tour section.
“Thanks also to the interstate and even international competitors who have come all this way to compete.”